This is an excerpt from "Don't Go There: A Solution to the Dyatlov Pass Mystery," a new book by Svetlana Oss.

Oss used to work at The Moscow Times, where she first wrote about the mysterious 1959 deaths of nine young hikers in the wild northern Ural Mountains.

Two middle-aged men are quietly talking together over a wide and highly polished wooden desk. Across the marbled reception lobby outside the open office door, a clock ticks. This is the only sound in an area flanked by oil paintings and hovering plainclothes security men. Rather as old soldiers who are asked the intrusive question "how was your war?" the discussion of the two middle-aged men is conditioned by their memories of hardships and the danger they suffered, under unrelenting authority, when they were in the army. They speak in an amicable way, but they are not friends, they are merely men of similar education, similar intellect and from similar backgrounds. They can look each other in the eyes with a mutual respect, despite their different stations and status.

The stouter of the two men is Boris Yeltsin, at that time the first secretary of the Sverdlovsk Communist Party. The lean, rangy one is Vladimir Korotayev, senior litigator and legal adviser to the Regional Prosecutor's Office in Sverdlovsk, now Yekaterinburg.

Yeltsin had been a student at the prestigious Ural Polytechnic Institute, the top Russian university, in Yekaterinburg. In 1976, when he became the first secretary of the Communist Party in Sverdlovsk, one of the first things he did was to invite Vladimir Korotayev, the first investigator of the Dyatlov case, to a private meeting.

They exchange a few pleasantries. Finally, Yeltsin leans forward and, in a low and friendly voice, broaches the main thing he wants to talk about. "I'm extremely interested, Vladimir Ivanovich," says Yeltsin, using the familiar Russian patronymic, "in exactly how these students could have died in the way they did. I myself am a former student of the Ural Polytechnic Institute. Like the climbers who went on the trip I heard what happened, but I could never understand how it happened."

Boris Yeltsin's lifelong fascination is shared by almost everyone who has heard of the Dyatlov Pass tragedy. The events were so devastating, so unusual, so deeply investigated and yet so resistant to understanding. Many Russians remembered the breaking news as a life event, and the civic outrage that it had stirred. By the time of this meeting in the Kremlin, the mystery had been unsolved for 30 years.

As he was there with Yeltsin, Korotayev — who had only been assigned to the case for several days — recalled how his local Communist Party leader, Ivan Prodanov, had banned him from continuing the investigation. Prodanov had told Korotayev: "this case being investigated is under the eyes of Khrushchev and I have assured him that it was just hypothermia. These people just froze to death."

Korotayev vividly recalled the events of Mount 1079, where the members of the Dyatlov group died. He remembered how he had flown in by helicopter to that bleak slope. He remembered how small, how abandoned, and how smashed the tent had looked; it was as if someone had taken a child's shelter into one of the most inhospitable places in the world, a place of ferocious winds and heavy snow, often prey to blizzards and severe storms, a place regarded as sacred by the local people, the Mansi. It made him think of the courageous and determined fight for survival that they had discovered, by young people at the end of their strength in a place where no one could survive. He had known he could not agree to the betrayal of that superhuman effort.

"I'm afraid I don't believe that the deaths of the students were simply caused by hypothermia, Comrade Prodanov," Korotayev had said.

Korotayev said much the same thing to Yeltsin that day when they met.

"Boris Nikolayevich, I'll tell you openly about it. I think it was murder, and not a usual murder. But what they wrote when they closed the criminal case was true. They were killed by an overwhelming force."

"Yes, there is such an overwhelming force, and maybe we both can guess what it is," he said. "Tomorrow I'll call the Central Committee of the Communist Party and ask them to call the prosecutor's office to reopen to criminal case." Yeltsin knew the country he lived in. He clearly suspected a cover-up.

Korotayev could not help feeling relieved. Would the truth now, at last, come out?

He and Yeltsin shook hands and parted.

Many years have passed since that conversation took place but the criminal case was never reopened. Not even Boris Yeltsin's influence and power was able to achieve that. An "overwhelming force" had killed the victims on the mountain. Another overwhelming force was conspiring to keep what had happened on the mountain a tight-lipped secret. 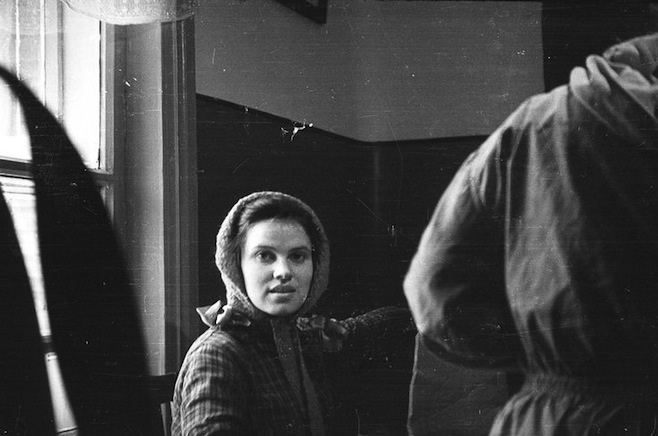 Lyuda Dubinina's diary provides an insight into the mind of one of doomed hikers.

"It's the last day of preparations and everything has been quite hectic. From 11 in the morning I was scampering between stores buying different bits and pieces. And I was silly enough to buy five meters of cambric that cost 200 rubles. I was packing in such a rush and of course I've forgotten one of my sweaters! Everyone was busy with something, and we had so many things to arrange!"

The snowy January of 1959 was eventful for Lyuda Dubinina, a twenty-year-old who studied engineering and economics at Ural Polytechnic Institute (UPI) in Sverdlovsk. For one thing, her dream had finally come true: She was going on a mountain expedition as a member of the city's best hiker's team. She was the one who suggested the whole adventure. She was the one who endeavored to make it happen. Secondly — just a week before the expedition set off — Lyuda's family had moved from their communal flat on Mamin Sibiryak Street to a private, two-room apartment in the center of Sverdlovsk.

The Dubinin family (the "a" at the end of Lyuda's surname in Russian is due to her being female) had been living in a cramped communal apartment until that moment. The shortage of living space after the Russian Revolution led to routine sharing of kitchen and toilet facilities by families. This often created the special psychological conditions that led to mass spying and informing on each other. Every apartment seemed to house a madman, a drunk, a troublemaker and a snitch. They all had to live within a power hierarchy and follow rules governing everyday behavior, the so-called Rules of Procedure. And finally it had happened: the Dubinins had moved somewhere nicer. So, no more quarrels in the kitchen, no more annoying and unpleasant remarks from the neighbors, such as, "You should turn the toilet light off after you, or I will apply for your eviction."

A friend of Lyuda's, Galina Batalova, recalls how happy Lyuda was these days. Her parents wanted her to spend the school holidays at home but the girl was determined to participate in the mountain expedition. "She was so excited to be accepted to the group. … She looked kind of spiritual, she wanted to be fit and did lots of ski training."

Lyuda had already been on several expeditions, once even as the group leader for a medium-difficulty route in the northern Urals. There was a rather unusual combination of shyness and strength in her: A city girl and the daughter of a senior manager, she could easily blush when talking to boys but did not drop a tear when a hunter's stray bullet struck her leg.

When it comes to heading to the mountains to brave the elements, and perhaps to find oneself, it's all about making sure you're going with the right people. It was hard for Lyuda to organize the group by herself. Being a girl, a blonde and to claim to lead the group of men into the mountains is a challenging task by itself. It was no wonder Lyuda failed. She was quite sharp and could deal with the opposite sex. She worked hard on developing herself in a personal sense. She kept a diary. Here what she wrote of her relationship with one of the fellow students, Eugene Zinoviyev, who finally joined another group of trekkers:

"Yevgeny is constantly trying to put me down. He must take me for some stupid girl."

Lyuda knew for sure she could rely on Rustem Slobodin. Slobodin had been in her group a year ago. Apart from being heavily involved in sport, Lyuda found this black-eyed Asian-looking fellow reliable and helpful. Ethnically he was Russian but his parents, both university professors, worked in Asia when he was born and gave him an Asian name. Rustem, or Rustik as he was often called, was a man of few words, who would share with you his last piece of bread — not a trivial thing when food in stores is only on basic supply and the Explorer's Club storages are often low.

Courageous and hardened, Rustem had one rather sentimental passion — he played the mandolin and always took this extravagant piece of luggage with him on the expedition. It looked so strange in his big rough arms when at nights he played it sitting by the fire.

Another person who easily agreed to go with Lyuda was Yury Yudin — a kind-hearted and always-smiling guy who she felt was almost like a brother and whose presence in any company was usually a guarantee of stability and sensible decisions.

Soon they received a letter from yet another Yury, Yury Krivonishenko, who now moved to Chelyabinsk, about 200 kilometers south, where he had a job as a physicist and engineer. He confirmed his participation. His whole letter was about the forthcoming expedition. It began with a romantic poem dedicated to those who love exploring the wilderness. The last line was, "I can honestly say I miss camp life a lot, and dream how great the expedition will be for me!"

Yury joining the team made Lyuda very happy. Krivonishenko was fun and could be a kind of figure of attraction for the rest. His friends often drank tea together at his parents' spacious apartment in the city center. Krivonishenko's parents were well educated and influential people, and they often welcomed students to their place. His father was the chief construction engineer of the Beloyarsky Hydro-Electro Station. Yury himself was the kind who is often called the life of the party. He never let a single expedition happen without him.

Preparations appeared to be going well but then some of the participants decided to pull out. Secondly, a potential problem arrived in getting Rustem on the expedition at all. Rustem worked at a secret atomic plant, involved in producing plutonium for weapons. In order to include him on the expedition, the university sent an official letter to his place of work. The letter was sent. There was no answer.

By this time Lyuda felt desperate. It was at this moment that another person arrived onto the scene. His name was Igor Dyatlov. Once he was involved everything fell into place. He was a natural leader.

Svetlana Oss' book "Don't Go There: A Solution to the Dyatlov Pass Mystery" can be purchased from amazon.com.