In response to the devastation of Assyrian monuments in Nimrud and Mosul, the Pushkin State Museum of Fine Arts has launched the campaign #savetheshedu, inviting Muscovites to pay tribute to priceless historic artifacts recently attacked by the Islamic State.

"This is a huge loss not just for them but for all of humanity. If we cannot respect our common history, then we have no hope," said Anastasia Yainovskaya from the Department of the Ancient East at the Pushkin Museum.

The Pushkin Museum is inviting visitors to take a photograph of the shedu on show in the museum and then post it on social media with the hashtag #savetheshedu.

The shedu are five-legged creatures with the body of a bull, wings of an eagle and head of a human that tower over the onlooker that stood guard at the entrances of palaces and at the gates of ancient Mesopotamian cities.

"In Sumerian and Akkadian mythology the shedu was a protective spirit that expressed humans' individuality" said the museum in a statement.

In February and March this year, members of terrorist organization Islamic State hammered and bulldozed world heritage sites in Iraq, destroying artifacts such as the shedu and others. The militant extremists, who have captured cities in Iraq and Syria, assaulted ancient, historic sites using heavy machinery and sledgehammers. The group says the sites promote apostasy and justify the destruction of monuments and cities by declaring them false idols.

Nimrud, an ancient city on the river Tigris founded in 13th century B.C., was bulldozed, with many of the ruins destroyed. The Mosul Museum, Iraq's second-largest museum, was raided by militants and the contents of at least two rooms were destroyed with sledgehammers. The museum held hundreds of artifacts found during a Soviet-Iraqi archaeological expedition in Mesopotamia in the 1970s, including a clay oven built in 5th century B.C. 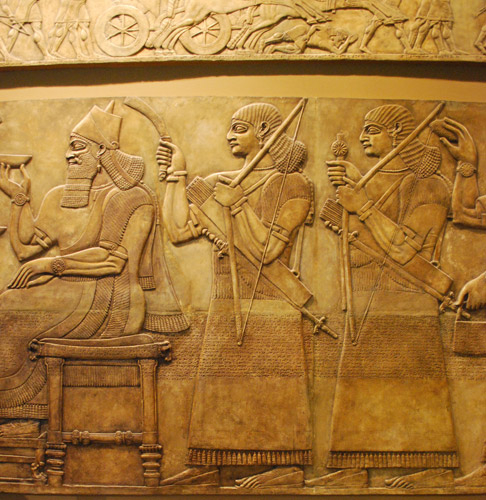 The museum asks visitors to upload a shot of the shedu and put it on social media with the hashtag #savetheshedu.

"When we were working in that area, we found a monument from 7000 B.C. that predated anything found before," Rauf Munchayev, president of the Archaeology Institute of the Russian Academy of Sciences, said in an interview. "We opened a period of history from 8000 to 4000 B.C." Munchayev led archaeological digs in Iraq from 1969 to 1980 and then from 1984 to 1985.

The Hermitage State Museum is home to five original pieces unearthed during this expedition.

The Pushkin State Museum of Fine Arts contains plaster casts of shedu winged bulls from Khorsabad and reliefs from the palace of Nimrud. The originals are on display at the Louvre and the British Museum, respectively. The Pushkin Museum also holds 476 original works of decorative art, dating to the late 5th century B.C., which were discovered in northern Iraq during an archaeological expedition.

Munchayev compared the loss of the Assyrian treasures to the loss of the Bamiyan Buddhas in Afghanistan, statues built in the 6th century when Bamiyan was a holy Buddhist site. The two giant Buddhas, one 55 meters tall, another 37 meters, were destroyed by the Taliban in March 2001 after being declared idols. "This didn't happen very long ago," Munchayev said. "We seem to be forgetting, but we need to remember these artifacts so that they are not lost to us."

UNESCO Director General Irina Bokova said in a statement: "We cannot remain silent. The deliberate destruction of cultural heritage constitutes a war crime." She continued to urge those in the region and elsewhere to "do everything possible to protect this heritage, to claim it as their own, and as the heritage of the whole of humanity."

In explaining why we are so drawn to Mesopotamia, Munchayev said: "On this territory appeared the earliest civilization in the history of mankind, the first cities, the first written language, the first government, the first state education. Therefore the cultural destruction of these places is an assault on mankind and civil society." 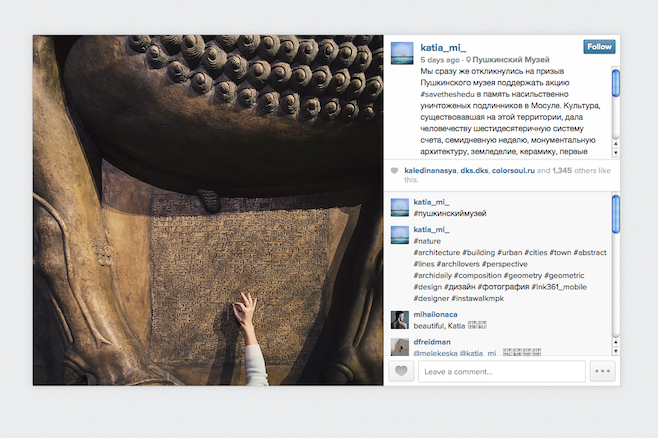 One of the photos posted on Instagram with the hashtag #savetheshedu.

Take two little words - хлеб (bread) and соль (salt) - put them together and get something grand.