After falling in love with the French language as a university student, Catherine Walter left the United States for France, where she studied second language acquisition and taught English.

Now she is a world-acclaimed expert in the field of teaching English. She has spent a lot of time in Russia as part of her work as president of the International Association of Teachers of English as a Foreign Language and with the British Council as chair to their English Language Advisory Group.

Walter is currently a member of a research team at Oxford University that looks at linguistics and English as an additional language. She is also a lecturer on applied linguistics and second-language acquisition. She will be speaking at the upcoming E-merging Forum, an annual international event organized by the British Council for teachers of English and international experts, taking place March 12 to 14 at the Izmailovo Vega Hotel, in Moscow. 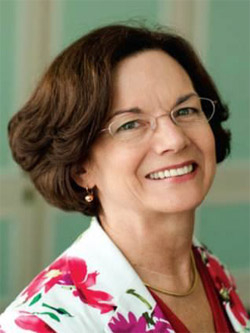 Q: How did you become interested in the area of language acquisition?

A: I fell in love with the sounds of French. I fell in love with how it sounded and the feeling of being able to think about things in a different way through a different language. I come from a working class family and didn't have a modern foreign language education at secondary school and it blew me away. So I changed my degree and did French and saved up to go to Paris! I became interested in helping people with different abilities and motivations to learn a new language. I got some training and started working as an English language teacher in Paris. I was working with people who had a variety of motivations and a variety of kinds of abilities. That's what got me hooked.

Q: What experience have you had with teaching English in Russia?

A: In 1993 I was the president of the International Association of Teachers of English as a Foreign Language, just at the moment when things were opening up between our two parts of the world. I was very aware that there was a long, strong, effective tradition of language instruction in Russia that had been cut off from our tradition, and I made it one of my priorities to link up with teachers in Russia. Throughout the 1990s and early 2000s, I worked in an advisory capacity in areas of teacher development and material development. I've traveled to many cities throughout the Russian Federation, talking to teachers and working with teachers.

Q: Many native English speakers do come to Russia to teach English. How can you tell a good teacher from a bad one?

A: The most dangerous mistake that those people can make is arrogance. A person knows nothing about language, nothing about pedagogy, yet they are expected to teach English. You need to be humble and know your limitations. If they have had appropriate basic training then maybe you can trust them for some things. I would look for a [teacher with a] CELTA certificate or a Trinity certificate, common certificates that native speakers tend to get. [Then] you know that they have the basics. Someone that is straight out of university and has done a day course on "how to teach English" — you're probably wasting your money.

Q: Can anyone become a teacher of their mother tongue?

Q: What would be your golden piece of advice for language learners?

A: There is no easy way to learn a language. If someone tells you, "here is my quick and easy way to learn a language," you know it is a lie. Finding a good school and teacher and working steadily is the only way. Just as Bruce Lee said about martial arts, "long-term consistency trumps short-term intensity." Language learning is a long journey and requires commitment.

Q: What are some of the traditions of language instruction that exist in Russia?

A: English language educators in Russia have retained a consciousness, in that long period when our traditions were separated, [of] the importance of retaining your identity as a Russian person, and also [of] memorization, which had a bad name in our part of the world in the 1990s, but is making a comeback. I met people who had never been to an English-speaking country in their lives but whose English was impeccable — near native. I have a problem with the word native. Their pronunciation, vocabulary, grammar was British standard. They haven't said, "oh that's the old way, we'll throw it out." There has been a beautiful integration of the two traditions.

Q: You don't like the word "native" — do you think native speakers make better language teachers?

A: Given an appropriate level of proficiency, it is more important to have knowledge about the language and knowledge about pedagogy than to be a native speaker. If I wanted to learn English, I would much rather have a Russian teacher whose English is good and who knows about English and knows how to teach. This morning a man came and picked the bins from outside my house in Oxfordshire. Would you rather have him teach your English or someone who knows about English? It's a no-brainer. Also, a person who has the same first language as you can intuit what your problems might be and analyze what your problems might be and know in much more detail how to guide your journey on how to be a proficient speaker of English. I imagine there are almost certainly more good "non-native" teachers of English than "native" teachers of English. If you took a random sample of both and asked me to choose one — I would choose "non-native."

Q: Is there an age limit for acquiring a new language?

A: There is not an age limit. Children don't absorb a language any better than adults if they don't get regular exposure and continue over a long period of time. The whole "all you have to do is start early" is a myth. There might be an age when it becomes more difficult, but that might be at … 70? It gets slightly harder when you are older but the difficulties can be overcome by motivation.

Q: Is it possible to acquire a language to a "native" level?

A: My French is pretty good. I don't make grammatical mistakes, I have a big vocabulary, I run meetings in French in France, I write business letters. I'm pretty good. But I have an accent. Well, guess what? I don't want to pass for a French-speaking person. The only people that need perfect accents are spies! If you really want to pass for a native speaker, fine, that's an interesting hobby — like learning to play the violin. Most people just want to be proficient speakers of the language and I don't mind people knowing that I'm not a native speaker of the language, because I'm not.

Q: Have the tensions between Russia and the West had any effect on the flow of English teachers?

A: Most people in my profession here in Britain feel that our job is to help people communicate, and better communication is always a good thing. I can't say any more than that.

Catherine Walter will speak at the E-merging Forum organized by the British Council. March 12-14. www.britishcouncil.ru/en/emerging-forum