One year ago, Russia was reveling in the Sochi Olympic Games that turned a snowless Black Sea port city into a winter sport paradise, anonymous athletes into national heroes and a horde of medals into evidence of its domination of world sport.

Today, Russia's sporting ego is bruised. Since German television channel ZDF/ARD broadcast a documentary in December in which Russia track and field athletes and officials alleged their sport was plagued with systematic doping, Russia has been scrambling to provide answers and assurances.

"You have to get past the 'he said, she said,'" Dick Pound, former president of the World Anti-Doping Agency (WADA), told The Moscow Times during a recent interview at his Montreal law office. "The German TV channel has some real smoking guns. They are satisfied there is enough of a case that WADA said it had to take an active role in figuring out what is going on."

Pound is set to lead a three-person panel that will investigate the claims made primarily by track and field athletes, including runner Yulia Stepanova and her husband, Vitaly Stepanov, a former employee of RUSADA, Russia's national anti-doping agency. They alleged in the documentary that coaches and sporting officials are complicit in Russian track and field athletes' use of performance enhancing drugs.

"Most of them [dope]. The greater part. Ninety-nine percent," Olympic discus thrower Yevgenia Pecherina, who is currently serving a 10-year ban for doping, said in the documentary when asked about the prevalence of doping among Russia's national track and field athletes.

If WADA does uncover systemic doping in the sport, Russian athletes and officials could be held accountable at a series of levels, including the International Association of Athletics Federations (IAAF) and the International Olympic Committee, according to Pound.

"And if it involves the country as a whole, then [WADA would have to report] to … UNESCO," Pound said. "Russia is a signatory to the international [anti-doping] convention, and if our committee finds that it is not in compliance with the convention, we'll say [to UNESCO]: 'This is your problem, what do you do with it?'"

The allegations have roiled the Russian athletics community. Five race-walkers, including three Olympic gold medalists and a world champion, were suspended last month by RUSADA for violating international anti-doping regulations. 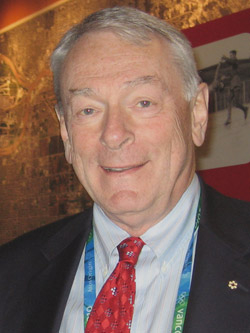 Long-time athletics coach Valentin Maslakov resigned over the scandal on Jan. 23, a decision Sports Minister Vitaly Mutko called "courageous" in an interview with Sport Express newspaper. The head of the Russian athletics federation, Valentin Balakhnichev, has also relinquished his position of treasurer of the IAAF pending its investigation of doping practices in Russia. He vowed to sue the program makers for defamation.

But the purges in the Russian athletics hierarchy are far from being the only troubling news for the sport. Steeplechase runner Yulia Zaripova, who won gold at the 2012 London Olympics, received a doping ban on Friday, RUSADA announced.

"The ones you worry about are not the ones who come in 326th," Pound said. "It's the very top athletes that are getting implicated in this [doping]."

International sporting organizations are also pursuing the recent allegations. In a statement last month, the IAAF said the number of doping cases among Russian track and field athletes, and race-walkers in particular, was a "major concern."

Since the 2009 launch of its Athlete Biological Passport program — meant to detect abnormal variations in biological markers that could indicate athletes' use of banned substances — the IAAF has sanctioned 37 athletes, 23 of whom are Russian.

Russian authorities' reactions to the allegations have run the gamut from principled outrage to cautious denial. Mutko, the sports minister, told Russian media that the country has been applying a "zero tolerance" policy to doping cases and that more sporting officials could be forced to resign.

Mutko also announced that a new position aimed exclusively at fighting doping would be created within the Sports, Tourism and Youth Politics Ministry.

Despite his calls for action, Mutko dismissed the notion that the Russian government — his ministry, in particular — could have curtailed malpractice within the athletics federation, insisting the state is limited in its ability to meddle in the affairs of an independent, non-governmental sporting federation.

"We became a civilized country and accomplished in four years what some other countries would take 10 to do [in terms of anti-doping policies]," Mutko told Rossiya 2 TV channel last month. Russia has ratified UNESCO's International Convention against Doping in Sport and adjusted its national legislation in 2011 to abide by international anti-doping standards.

"We conduct about 18,000 tests a year, and we find that approximately one percent of the results constitute doping violations. This is no worse than the records of the United States, Germany or Britain," said Mutko.

Mutko, who claims that Russia ranks among the top five countries with the best-organized anti-doping measures, praised the openness of its anti-doping laboratories, citing the presence of 15 foreign specialists at the anti-doping center used for the Sochi Games as proof that there had been no cover-ups.

Although no Russian athletes tested positive at last winter's Olympics, Moscow's Anti-Doping Center, which conducted doping tests in Sochi, was on the brink of being suspended prior to the Games.

"They [laboratory officials] pulled together because it makes sense to have a Russian-accredited lab heading the doping control in and around the Sochi Games," said Pound, who chaired the WADA committee that reviewed the laboratory. "One of the things we instituted as part of our review was a process of best practices to make sure we have the right people there. Technically, it's a very good lab."

The Moscow Anti-Doping Center was salvaged and is now set to manage the doping control at the FINA World Aquatics Championships in Kazan this summer.

But unethical athletes have not seemed deterred by the prospect of being caught by the WADA-accredited laboratory. More than 260 athletes, coaches and medical staff are currently suspended by RUSADA. Nearly one quarter of them are from track and field.

Stepanova, the runner who made allegations about her country's doping practices, has indefinitely left Russia, according to the German documentary.

Radel Kashefrazov, gold medalist in the men's 4 x 400 meters relay at the 2013 World University Games in Kazan, declined to comment on whether Russia's young track and field stars were being pressured to dope.

"No," Kashefrazov swiftly replied when asked whether he had witnessed any doping among his teammates.

A Russian Olympic gold medalist contacted by The Moscow Times also declined to comment on doping practices in the country.

Part of the problem is Russia's struggle to rid itself of its doping past. The Soviet Union was hungry for victories on the world stage and at sporting venues, and earned 1,204 Olympic medals between 1952 and the country's collapse in 1991, which remains to this day the second largest number of medals won by any country at the Olympics.

Former Soviet scientists have admitted that the U.S.S.R.'s staggering athletic prowess was aided by the widespread use of banned substances. Coaches, athletes and the authorities were allegedly in on the doping schemes.

Nikita Kamayev, executive director of RUSADA, told The Moscow Times that doping in the Soviet era was a byproduct of scientific research and not meant to violate any rules. Kamayev also said doping is not as harshly condemned in Russia as it is in the West.

But the recent bans on Russia's top race-walkers could now be the needed impetus for major transformations in the country's sporting culture and its approach to fraudulent athletic success.

"We had the same sort of thing in Canada," Pound said. "It was kind of drifting along until [sprinter] Ben Johnson [who was disqualified at the Seoul Olympics for doping] in 1988 woke everybody up. Canada is now regarded as one of the leading countries in fighting against doping in sport. Are all Canadian athletes clean? No. But there is no ingrained culture of making sure that in order to be good, Canadian athletes would have to dope.

"I don't know whether that's the same in Russia or not."

Double Olympic champion Olga Zaitseva took over as caretaker head coach of the Russian biathlon team with her sport dogged by a string of positive doping...
Black Sea Blockade

Moscow claimed that the withdrawal was a voluntary show of “goodwill.”
Roll Credits

The Moscow-appointed governor said Russia's Black Sea ships "are ensuring the security" of the journey.