ST. PETERSBURG  — Russian army conscripts are being tricked or pressured into signing up to become contract soldiers, human rights groups say — and their relatives fear that once they turn professional, they run the risk of being secretly dispatched to fight in eastern Ukraine.

Soldiers' Mothers of St. Petersburg, an NGO that battles to uphold the rights of Russian military personnel and their relatives, said it had received a number of complaints regarding a military unit in Kamenka, a village in the Vyborg district of the Leningrad region, around 100 kilometers northwest of St. Petersburg. Soldiers' relatives called the organization's hotline, submitted complaints by e-mail and also came to its offices to file written reports, the NGO said. No state agency has either confirmed or denied the reported information, and the Western Military District's press service declined to comment immediately on the matter when called Thursday.

"When you see the news [about the conflict in eastern Ukraine] these days, it breaks your heart," said Irina, who asked to be identified only by her first name to protect her identity and that of her nephew, who is serving in Kamenka and who she said refused to sign a contract when ordered to earlier this month.

"They were assembled together in a room and told to sign contracts," Irina told The Moscow Times by phone on Tuesday.

"No physical force was used against them, of course, but there was psychological pressure. […] They were told, 'If you sign the contract, you'll be paid more.' Obviously, they were not told it had anything to do with events in Ukraine."

Another soldier's father, who asked to be referred to only by his first name, Alexei, said his son, who was called up in June to perform his military service in Kamenka, signed up for the professional army in December.

"No explanation was given; he was told 'You must sign it,'" Alexei told The Moscow Times by phone on Tuesday.

"He was on assignment in the Tver region for three months, and when they came back, that same day or the next, their squadron was assembled in a room, handed out contracts and told to sign them. They were promised that the contracts would only be valid for the same duration as their national service."

According to Alexei, no pressure was exerted on the soldiers in his son's case. "He just bought it, [they were obedient] like a flock of sheep, and signed everything."

A written report from one of the parents of a soldier named Vladimir serving in Kamenka and submitted to the Soldiers' Mothers of St. Petersburg — which was added to the "foreign agent" list of NGOs by the Justice Ministry on Aug. 28 — says that he was "forced to sign a contract by means of threats and insults."

Several e-mails from soldiers' relatives sent to Soldiers' Mothers of St. Petersburg and seen by The Moscow Times this week, with the senders' names redacted, describe similar situations in Kamenka.

One says that a conscript who had signed an army contract found that his military ID contained no record that he was now serving on contract, while he and his fellow soldiers who had signed the contracts were told they would be sent on Feb. 9 for military exercises for three months to the Rostov region, which borders Ukraine.

Numerous reports have claimed that Russian soldiers have been sent across the border into eastern Ukraine to bolster the efforts of pro-Russian separatists fighting government troops there. The Kremlin has repeatedly denied the allegations, insisting that any Russian troops fighting in Ukraine are there as volunteers.

Another e-mail alleges that an officer blackmailed soldiers into signing contracts.

"We were told that we would be labeled traitors of the motherland and shot if war breaks out. That they would alter our military records so that we would never be able to get a job," the letter said. Another message, apparently concerning the same person, said that 10 other soldiers had signed contracts following the threats. 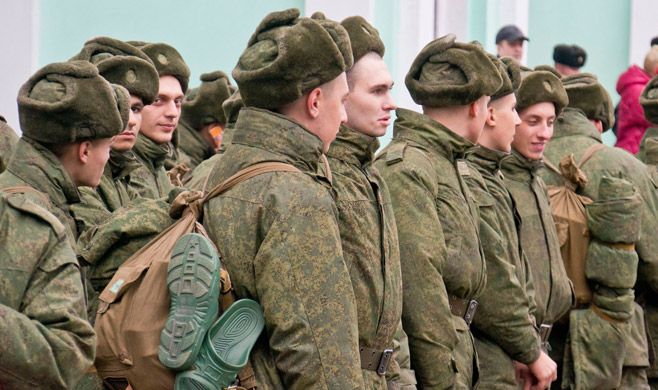 According to Soldiers' Mothers of St. Petersburg spokesperson Alexander Peredruk, the shortest term for a service contract under Russian legislation is two years, so the soldiers were apparently deceived when they were told that they would not have to serve as professional soldiers any longer than they would have as draftees. Compulsory military service in Russia lasts for one year.

Aside from pressure, soldiers are also lured into signing contracts by promises of higher wages: at least 20,000 rubles ($295) a month for contract soldiers compared with 2,000 rubles a month for conscripts, Peredruk said. Other benefits include bonuses, accommodation in a hostel rather than in barracks, and days off over the weekend, he said.

Peredruk said the soldiers become easier to manipulate once they sign contracts, even if their status does not change much from a legal perspective.

"No one is told that they will go to Ukraine. Officially they go [south] for military exercises, and then it depends," he said.

"For instance, if we recall the story of [20-year-old contract soldier] Anton Tumanov, he originally went [to the Rostov region] for military exercises and somehow ended up on the territory of Ukraine, where he was killed [in August]. … Officially, Russia is not involved in any combat action [in Ukraine], and if anybody goes there, they supposedly do so voluntarily; no one has the right to order them there by law, regardless of whether they are conscripts or contract soldiers."

Boris Vishnevsky, a deputy for the liberal Yabloko party in the St. Petersburg Legislative Assembly, wrote a formal letter on Jan. 23 to the Western Military District's military prosecutor Artur Yegiyev.

In his letter, Vishnevsky wrote that a number of parents of soldiers believe that their sons may be sent to Ukraine after being transferred to the 138th Guards Motor Rifle Brigade. Vishnevsky asked Yegiyev to look into the reports and to take measures to prevent soldiers from being pressured into signing contracts, as well as from being sent to participate in combat action in Ukraine.

"Everything seems to indicate that what is happening in Kamenka is not an isolated case," Vishnevsky told The Moscow Times on Tuesday.

"I received similar reports from the north [of Russia]. We are talking about people being forced to sign contracts, about soldiers being dispatched to Ukraine, and moreover we are talking about how they [senior military personnel] then get sent coffins from there and write some totally crazy causes of death on the death certificates, such as a training grenade exploding in their hands." 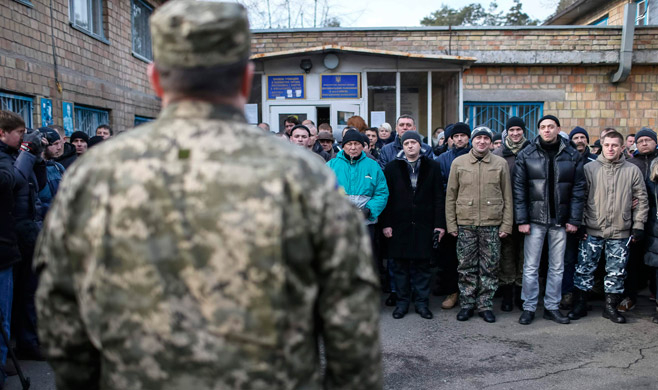 Families of Russian conscripts fear they could be sent illegally to fight their Ukrainian counterparts, above.

Vishnevsky added, however, that he had yet to obtain any documented proof to back up the claims made in the phone calls and conversations.

"It's obvious that people won't give their names because they are scared, but I am waiting for at least some concrete facts, names and numbers of military units, so that I can file a formal appeal," he said.

In Pechenga, a village 170 kilometers west of Murmansk in Russia's extreme northwest, about 70 soldiers were reportedly coerced in November into signing contracts, the Murmansk region's Soldiers' Mothers legal counsel, Irina Paikachyova, told The Moscow Times by phone on Wednesday.

According to Paikachyova, the soldiers were promised that they would be free to terminate their contracts without any penalty after serving for three months, and were then sent "to the south," after which they were allowed to go home for a brief unofficial vacation before returning to their unit in late January.

However, she said, the contracts have not been terminated, and the soldiers reportedly continued to live and serve in the same conditions as conscripts — with the exception that for the two or three months that they were away from their barracks, they allegedly received 25,000 rubles a month.

Paikachyova said that their assignment could have included combat action in eastern Ukraine.

Lyudmila Ivakhnina of the human rights advocacy organization Memorial in Moscow said that pressuring conscripts to sign professional contracts appears to be a "massive" practice in Russia. Speaking to The Moscow Times by phone Thursday, Ivakhnina said that few human rights groups are prepared to publish information about the issue out of fear of reprisals being taken against the soldiers whose relatives turn to them.

In addition, human rights groups themselves do not feel safe, Ivakhnina said, citing pressure on activists who reported the deaths of Russian soldiers allegedly killed in Ukraine.

Lyudmila Bogatenkova, head of the Soldiers' Mothers Committee in Stavropol, was detained in October and charged with embezzlement after passing on information about nine contract soldiers reportedly killed in Ukraine to the Presidential Human Rights Council. And Pskov-based Yabloko lawmaker Lev Shlosberg was attacked and badly beaten in August following his report about a secret funeral for soldiers from the 76th Guards Air Assault Division at a cemetery near Pskov.

As a result, of five organizations that have reported — via human rights advocacy channels — cases of conscripts being forced to sign contracts, three asked not to be named in the media, Ivakhnina said.

However, when soldiers are persistent and not afraid, they have a chance of winning, even if only one case of legal action being taken over forced contract signing is known in Russia so far, she said.

A soldier from Perm — referred to in a report by the regional ombudsman as Private K. for his own safety — was pressured to sign a contract after completing his compulsory military service in August. Instead, he left his military unit based in Tula and reported the situation to Perm ombudsman Tatyana Margolina and received legal assistance in filing a lawsuit against his unit. In October, he won his case when the Tula Garrison Military Court ruled that the actions of his commanders had been illegal.

Shelling of Mariupol Ups the Ante in Ukraine

As fire rained down on Ukraine's east over the weekend, Russian, Ukrainian, and Western leaders demonstrated a readiness to raise the stakes in a...
‘Not an exaggeration’

The defense ministry in Kyiv said Thursday that Russian forces were preventing civilians in Donbas from fleeing to Ukrainian-controlled territory.
'something to build on'

UN urged Russia and Ukraine to "build on" coordination that enabled the evacuation operations from Mariupol in order to resume stalled peace talks.
tightening control

The Kremlin said it was important to ensure basic living conditions in Ukraine as signs multiplied that Moscow is moving to permanent occupation.