President Vladimir Putin's insistence on huge defense spending makes it hard to see how a government plan to make deep budget cuts will see Russia through a deepening economic crisis.

Finance Minister Anton Siluanov called on Wednesday for a 10 percent cut in planned expenditures, warning that if oil were to average $50 a barrel this year, the budget would face a shortfall of 3 trillion rubles ($46 billion).

But defense spending will not be affected because of a Putin directive that dramatically limits room for maneuver: Military and security costs swallow up more than a third of the budget and are set to rise by about 30 percent this year. 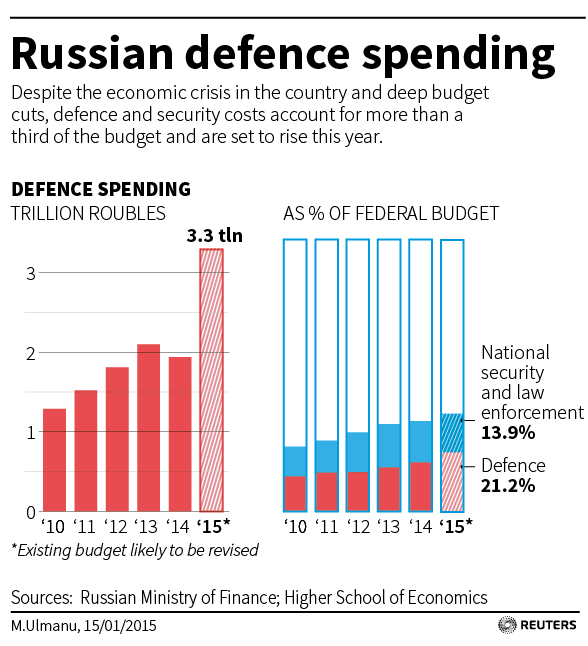 Siluanov had signaled opposition to the huge outlay on the military. "One needs to redistribute and restructure expenditures in favor of infrastructure, education and so on. Such military expenditures are heavy to carry," he said.

However, that was on Dec. 26 and on Wednesday he performed his about-face, acknowledging that defense was off-limits.

Despite the crisis gripping the economy, Putin is preoccupied with boosting Russia's international might, being tested in the standoff with the West over Ukraine.

He has also shown he will not put his popularity at risk by cutting social expenditures such as pensions, which rely on federal subsidies that consume another quarter of the budget.

Last month he said pensions must be indexed to inflation, which is now running at more than double the annual rate of 5.5 percent projected in the 2015 budget.

"For Putin the priority is the army, the secret service and the bureaucracy. And also financing pensioners, the main supporters of the regime," Boris Nemtsov, an opposition leader and former deputy prime minister, wrote on his Facebook page.

"All the same … a reduction in people's real incomes and a rise in poverty is unavoidable."

Both Siluanov and Prime Minister Dmitry Medvedev have now acknowledged the budget agreed late last year, based on the oil price averaging $100 per barrel over the next three years, is not fit for purpose.

Since it was agreed, the price of oil, Russia's main export earner, has fallen below $50 and the ruble's parallel dive has continued. The currency lost more than 40 percent against the dollar last year and Russia's problems have been aggravated by Western sanctions over the Ukraine crisis.

Before the plunge, oil and gas produced around half of federal tax revenues, and the World Bank now expects the economy to contract 2.9 percent this year.

Economy Minister Alexei Ulyukayev sees a "pretty high" chance that Russia's credit rating will be downgraded to junk and a deputy, Alexei Vedev, expects inflation to peak at 15-17 percent in March or April.

Russia plans to spend more than 20 trillion rubles by 2020 on modernizing its armed forces, but the dilemma is not new. Long before the collapse in oil prices, Siluanov's predecessor Alexei Kudrin warned that plans to spend hundreds of billions of dollars on rearmament were unaffordable.

Kudrin was sacked in 2011 for speaking out against the military build-up and now doubts the Kremlin has woken up to the new realities. "I have the impression that at all levels of power, including the first person [Putin], there isn't an objective assessment of the challenges before Russia," he said in an interview with Russian agency RBC on Jan. 12.

Kudrin again singled out the military program, saying: "It was obvious that it was impossible to fulfill it even before, and all the more so now that oil prices are lower."

The root of the Kremlin's complacency, Kudrin and other analysts say, is the fact that Russia's reserves still look impressive. The budget's Reserve Fund, accumulated during the years of oil-price plenty, is worth about $90 billion, or around 6 percent of gross domestic product. Another sovereign fund, the $80 billion National Welfare Fund, could also be tapped.

However, 60 percent of the latter fund has already been earmarked for off-budget projects. Moreover, the whole fund is meant to provide long-term support to the overstretched pension system, which faces a growing hole.

In December, the Kommersant newspaper published what it said were leaked Finance Ministry projections, based on an average of $60 per barrel in 2015, under which 70 percent of the Reserve Fund would need to be spent this year.

Siluanov has said he expects a fiscal deficit of up to 3 percent of gross domestic product this year, which suggests the fund could run out in about two years if there is no oil price rebound.

That raises the question of how Russia would fund the shortfall if oil prices remained low for several years, or how it would cope with further budgetary shocks.

German Gref, head of the state's biggest bank, Sberbank, has called for a "radical turn" in policy and set out a plan for doing so. Some others appear to have given up hope on the government's ability to come up with a coherent crisis plan.

"In these conditions what can the government do?" asked Nemtsov. "They will start printing money right away and do it regularly, so as to economize on the reserves."

"The Kremlin has nothing left except to pray that oil prices will rise."

A leadership shuffle at Russia's United Aircraft Corporation has paved the way for greater domination of the defense industry by another state-owned...
news

Russia to Cut All Spending by 10 Percent, Except on Defense

Russia must cut expenditure to cover what could be a more than $45 billion drop in revenues this year if the average oil price is $50 a barrel, Finance...
JAIL TORTURE

Authorities have launched an investigation into a prison riot involving at least 200 inmates.
FOURTH WAVE

Only 31% of Russians have been vaccinated against the coronavirus.