Chechen leader Ramzan Kadyrov has embarked in recent days on a marathon of threat-laden spats with prominent public figures, making statements so brazen they would be unimaginable coming from any other regional leader.

Analysts interviewed by The Moscow Times attributed Kadyrov's recent bout of brashness to the unyielding trust President Vladimir Putin seems to have had in the Chechen strongman since his clan began helping Russian forces bring the republic back under Moscow's control after the start of the Second Chechen War in 1999.

A recent terrorist attack targeting a French satirical weekly has fueled Kadyrov's recently emboldened rhetoric. On Wednesday, gunmen stormed the Parisian headquarters of Charlie Hebdo, a publication well known for its offensive depictions of the prophet Mohammed. Twelve people were killed in the attack.

The virtually non-existent reaction of Muslim officials in Russia appears to have given Kadyrov a window of opportunity to assert his role as a strong Muslim leader in a country with many millions of Muslims.

In the aftermath of the Paris massacre, mourners and activists took to social media in a bid to urge newspapers worldwide to publish Hebdo cartoons in solidarity with the slain cartoonists. Kadyrov was quick to voice his disapproval. In comments made Monday via Instagram — his preferred method of mass communication — the Chechen leader vowed to mobilize Muslim protesters en masse if any Russian media outlets opted to reprint the cartoons that had provoked the attackers' ire.

"We have often forgiven even those guilty of the deaths of loved ones. But we will not allow anyone to insult the prophet, even if it will cost us our lives," Kadyrov wrote. "And if we're still staying quiet, that doesn't mean we can't bring millions of people to their feet across the world to march in protest of those who repeat the insults against Muslims' religious sentiments."

Last week he lashed out at exiled tycoon Mikhail Khodorkovsky, who had been among those calling on media outlets to reprint the cartoons. Kadyrov also railed against the head of the liberal Ekho Moskvy radio station, Alexei Venediktov, over the news outlet's decision to poll readers on whether newspapers should publish the offensive cartoons.

"There will be those who will call Venediktov to account" for insulting Muslims across the world, Kadyrov wrote via Instagram on Jan. 9.

Kadyrov referred to the radio station as "the main anti-Islamic mouthpiece," saying Venediktov had knowingly insulted millions of Muslims.

Venediktov denied in a blog entry that the poll had been motivated by anti-Islamic sentiment, and said he would appeal to law enforcement authorities as he takes "threats made by Ramzan Kadyrov very seriously."

Russia's poor track record with press freedom is widely recognized. It ranked 148th of 179 countries in Reporters Without Borders' 2014 World Press Freedom Index. But the Chechen republic has had a particularly dark reputation in this arena since the murders of journalists Anna Politkovskaya (2006) and Natalya Estemirova (2009), both of whom were killed after having extensively covered human rights issues in Chechnya. 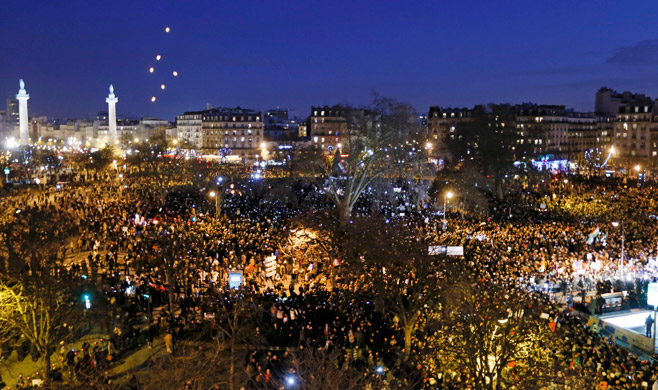 As hundreds of thousands mourned the loss of the Charlie Hebdo cartoonists, Kadyrov heightened his rhetoric.

The Paris massacre followed on the heels of an attack in the Chechen capital of Grozny on Dec. 4, which left 14 police officers dead and dozens of others injured during a nighttime battle between security forces and militants.

In the aftermath of both deadly massacres, the question of where the Kremlin draws the line for Kadyrov is increasingly unclear.

After the offices of several human rights activists working in Grozny were hit by an arson attack in mid-December following Kadyrov's accusations that they had collaborated with terrorists, Mikhail Fedotov, the head of the Kremlin's human rights council, warned that "it would be incredibly stupid if anything happens to these activists."

The attack happened after the activists had reported that the homes of people believed to be tied to militants involved in the Dec. 4 assault had been burnt down by masked men — an attack they linked to Kadyrov's earlier remarks calling for the families of militants to be punished.

When asked about the apparently fiery fallout of Kadyrov's claims at his annual press conference in December, Putin offered a gentle reprimand: "As a rule, the relatives of people who commit terrorist attacks are aware of it at least in the vast majority of cases … But this does not give anybody, including the leader of Chechnya, the right to any kind of extrajudicial settling of scores," Putin said.

Beyond those remarks, however, there has been no official backlash against Kadyrov's behavior, and the recurring question of whether it's Kadyrov who answers to the Kremlin — or the Kremlin to Kadyrov — has again gained traction.

Several analysts have said that Kadyrov has a license to act offensively because he holds a special place in the Kremlin's heart.

He "earned their trust by suppressing the armed opposition in Chechnya," said Mairbek Vatchagaev, a regional analyst with the Jamestown Foundation, a U.S.-based research institute.

"Ramzan Kadyrov has an unlimited supply of trust from [President] Vladimir Putin. He will not say anything that would be harmful to Putin, or that wouldn't be in agreement with the personal opinion of the Russian president," Vatchagaev said.

Carnegie Moscow Center analyst Dmitry Trenin agreed with this assessment, saying "Kadyrov has a license to say and do things no one else has. He is Putin's 'irregular' fighter, and his mission is to take on Russia's — and Putin's — enemies."

Trenin ruled out any possibility of Kremlin officials encouraging Kadyrov to make such loaded statements, however, noting that Kadyrov is allowed to say and do things "without having to clear them with anyone in advance."

Through his public statements and adoring Instagram posts, Kadyrov has repeatedly made clear that his allegiance is to Putin.

According to Georgy Engelhardt, an independent analyst on Islam,"fear of religious and/or ethnic conflict" may also play a role in the Kremlin's tolerance for Kadyrov's remarks.

"Kadyrov's unique position is based on the perception that he is the key person pacifying rebellious Chechnya. So, especially during a period of crisis, the government basically prefers to tolerate his actions rather than open a Pandora's box by restructuring the elite in the Caucasus," Engelhardt said.

Kadyrov Says Islamic State Not a Threat to Russia

He instead blamed Western sanctions imposed on Russia.