An online crowd-funding campaign has raised more than $27,000 to have memorial plaques installed on the former homes of the victims of Josef Stalin's purges.

The first palm-sized plaques were installed on a building on Dolgorukovskaya Ulitsa in central Moscow on Wednesday, and gave the name of the victim, the date of birth and arrest, and, in many cases, the date of execution by firing squad, according to photographs and accounts posted online.

The plaques also list the date of official rehabilitation — the day a given victim had his or her name cleared for their supposed crimes, as part of the Soviet government's attempts to make amends after Stalin's death.

“At least 65 people left this building [on Dolgorukovskaya] never to come back,” a councilman in Moscow's Shchukino district administration, Maxim Kats, said in his blog on the Ekho Moskvy website Wednesday, adding that only four plaques had been installed so far.

The project, called the “Last Address,” draws on a vast database of repression victims compiled by Memorial Human Rights Society, and has been funded exclusively by private donations through online contributions, according to the project's website.

Almost 1.5 million rubles ($27,000) had been raised as of Thursday, the crowd-funding platform Planeta.ru showed.

Most of the victims' relatives who have applied to have a plaque installed were asked to contribute no more than 4,000 rubles ($73) themselves, organizers said.

“There is no state participation in this project,” Kats said in his blog, adding: “Thank God they don't interfere.” 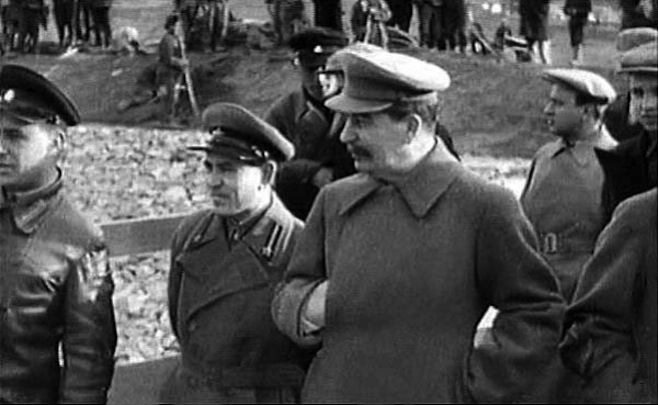 Soviet dictator Josef Stalin on the building site of the Moscow-Volga canal, built by gulag prisoners.

Millions perished during the Stalinist Great Terror, when an estimated 20 million prisoners were sent to the gulag, where many died. The number of those executed by firing squads exceeds a million, according to many historians.

One of the organizers of the memorial project, journalist Grigory Revzin, said in a video posted on the crowd-funding website that the Stalinist era of repression has not been forgotten, though opinion polls show there is continuing support for Soviet leaders among the Russian population.

“Sometimes we say that nobody remembers anything, that all those victims are unimportant to us, that people love Stalin,” Revzin said. “This is not true. People completely remember it."

Memorial group, an NGO that emerged as Russia's leading human rights organization after the collapse of the Soviet Union, has compiled extensive records of the Stalin-era purges and their victims.

This fall, the Justice Ministry said it had appealed to the Supreme Court to have the NGO shut down for violating Russian law.

More Russians blame the collapse of the Soviet Union on a "conspiracy" of hostile Western forces than seven years ago, in a sign the wave of anti-Western...
russia's response

Eight Ukrainian servicemen have been killed since mid-February in clashes that Kiev blames on Moscow and separatist leaders.