In the aftermath of last week's attack on Grozny, Chechen leader Ramzan Kadyrov announced that families of terrorists in the republic will be deported and their houses will be razed to the ground.

"I officially declare that the time when parents don't answer for the actions of their sons or daughters has ended. In Chechnya, they will answer for them! If a father sees that his son has gone down the path of terror and Wahhabism, let him give up his son to authorities or stop the spilling of blood in another way," Kadyrov wrote on his Instagram page Friday.

The comments came a day after Islamic insurgents launched a major attack on the capital, killing 14 policemen as well as several militants, and injuring 36 people, by Kadyrov's count. 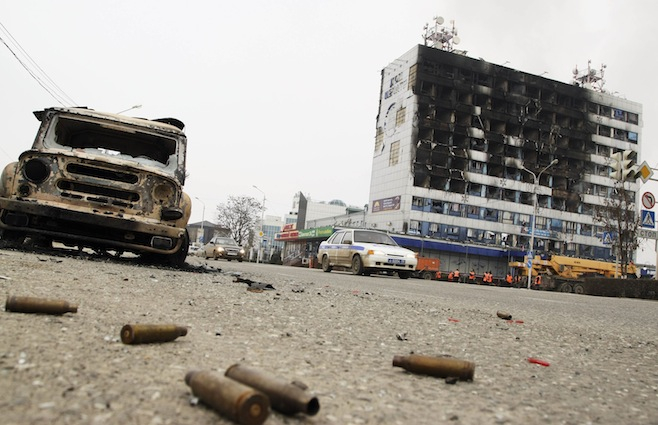 A burnt-out car is seen near the Press House building, a local media agency, in the Chechen capital Grozny on Dec. 4, 2014.

"If a militant in Chechnya murders a policeman or another person, the family of the militant will immediately be deported from Chechnya without the right to return, and their home will be torn down to the ground," Kadyrov wrote on Instagram.

"Everyone should know this before aiming a weapon at a police officer or another person. I will not allow anyone to spill blood here!" the Chechen leader said.

He also said he had met with ministers, judges and the heads of police departments to put in place "exceptionally strict but fair conditions" that such officials would resign if any people residing in their district took up arms and joined the militants.

"Let them work day and night so that this doesn't occur," Kadyrov wrote.

It was unclear how Kadyrov would be able to secure the deportation of militants' relatives, as this is forbidden under the Russian Constitution. In November 2013, however, President Vladimir Putin signed a law making terrorists' relatives liable for the damages caused during attacks.

That law, which was largely seen as a pre-emptive measure to deter any attacks ahead of the Sochi Winter Olympics, requires that relatives of militants provide compensation for any material and moral damages.

Security forces in the capital of Russia's North Caucasus republic of Chechnya stormed two buildings, including a school, in fierce gun battles with militants...
apology wanted

Just 48 kilometers from the shore, Snake Island was a key battleground between Ukrainian and Russian forces.