By Maeve Shearlaw for the Guardian New East Network

On a crisp autumn night in central London a group have gathered to discuss an age-old Russian affair: A shared love of mayonnaise.

The crowd is dominated by Russian expats living in London. The venue is Pushkin House, set up in the 1950s as meeting place for all of those interested in the country's culture.

So is the ubiquitous condiment really that popular? An emphatic yes from (almost) everyone present.

Mayonnaise was introduced to imperialist Russia at the turn of the 20th century and it remained a stalwart throughout Soviet times. Mass-produced and durable, it was everywhere — from workers canteens to households that didn't have an abundance of fresh food. Today the average Russian consumes 2.5 kilograms a year, using it as everything from a salad dressing to a bread spread.

The evening is chaired by Karina Baldry, who says she loves "everything to do with emulsified eggs." Baldry explains that culinary life when she was growing up was all about tins and jars with an occasional bit of salami. You could only get certain foods if you had the right connections. Mayonnaise was only "randomly available in the 1990s, so I bought up all the stock I could find." Did anyone ever make it? No, they really liked the jars, she says.

Baldry only realized how zealous she was when she married a British man who failed to share her passion — although she insists that her food is never "swimming in it" just "lightly dressed."

Her co-chair, Jennifer Eremeyeva, is an American who married a Russian while living in Moscow in the 1990s. She say she became interested in food because "it was one of the only things about Russia I could control." She now runs a blog about Russian life, majoring on food and culture.

Eremeyeva went to Russia in 1978 and witnessed the food scene change after the fall of the Soviet Union. There was excitement about grapefruits and Baskin Robbins. More recently sushi became the rage, now even low-fat products are widely available, she says.

She's not so sure about the need for mayonnaise with everything.

"I like it but it has its places, in sandwiches ... not to hide flavors or as a dish lubricant," she says. Egg mayonnaise, tuna sandwiches or potato salad — OK. In soup, on fried eggs, or as a marinade — not OK, she writes on her blog.

"Food is great way in to a culture," says Eremeyeva, paying tribute to the "Slavic soul of hospitality." When someone cooks you a dish "it's like someone is inviting you into their house and asking you to put on their slippers," she adds. 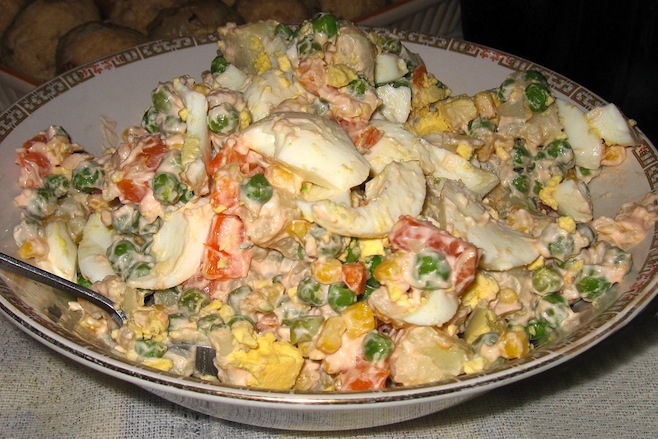 The evening, organized by post-Soviet food enthusiasts Russian Revels, explores many aspects of Russian life — just not politics. The discussion briefly touches on the sanctions imposed by the Kremlin in August in responses to international sanctions over Russia's role in the violence in Ukraine: There is talk of supermarket shelves stocked with "Belarussian mussels" — despite the country being landlocked — and "Siberian mozzarella". Some think sanctions will be the death knell for the foodie culture, others think they will allow Russian producers to come into their own.

Eremeyeva denounces the dish as "a culinary crime … a metaphor for everything that's wrong with Russia," triggering a round of (lighthearted) boos. "Beets and herring shouldn't go together," she says. But she is very much in the minority.

This prompts others to share their mayonnaise crimes: Kate Chernyshov, a Brit who lived in Russia in the early 90s, described going to friend and being served a meal od Brussels sprouts and mayonnaise. Eremeyeva shared her mother-in-law's specialty dish— "French meat"— which involved slathering meat in mayo and baking it for hours.

But for every crime someone claims a culinary triumph. Alexei Evstafiev, a Russian who has lived in London for eight years, outlines his mother's recipe for spit roasted chicken. The secret? A coating of mayonnaise. Baldry adds it when baking biscuits or chocolate cake; she also puts it in soup. Ukrainian Oksana Dmitriyeva, who has been in living in Britain for 14 years, says she likes to mix mayonnaise with sour cream as a dressing or add to fried liver to soften it up.

Mayonnaise is not the only fixture of Russian cuisine under discussion. Soup is also a highly protected craft which, according to tradition, should only be blended if the person eating it is ill. And of course there's dill — which Russians seem to love above all else.

Expats living in Russia have suffered so severely from its overuse that they have set up a Facebook group, DillWatch, which has more than 1,000 members who share pictures of "inappropriate" uses of dill.

Following a sweeping ban on food imports from the U.S. and EU, Russians are frantically leafing through their cook books in search of recipes without...
moving pictures