A tit-for-tat round of sanctions between the United States and Europe and Moscow over Russia's involvement in eastern Ukraine has seen capital raised by Russian companies forced to a virtual halt. Just $10 billion was issued in new debt for instance, a fraction of what was sold last year.

As a result, investment banks' income from syndicating Russian debt sales and share listings in 2014 stands at just over $100 million, a quarter of 2013 earnings and the lowest since 2004.

Adding fees from loans and merger/acquisition deals, they have made around $350 million — less than half last year's total as the following graphic shows: 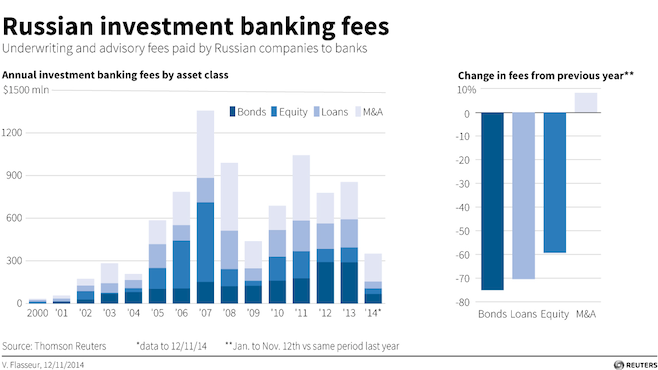 Those sums might look like small change for global banks. But every dime counts these days for lenders slammed by multibillion dollar fines from regulators, an increasingly tight leash on once-booming forex markets and slow European growth.

The Russian deals business earned banks over $8 billion in fees over the past decade, nearly a tenth of their total emerging market business relating to capital raising or mergers and acquisitions.

But now sanctions prohibit Western investment banks from helping Russian companies deemed to be complicit in the Kremlin's Ukraine policy to raise capital and investors from the United States, EU and several other countries are not allowed to buy new securities from those firms.

Last week's $700 million issue by Gazprom, led by JPMorgan, was the first Russian Eurobond since July. Gazprom is not on a list of Russian companies banned from raising new capital on a range of Western markets — its omission largely attributed to the fact that it supplies a third of Europe's gas needs.

"Everyone is feeling the impact a bit from Russia not issuing so much this year," said Jean-Marc Mercier, global head of syndicate at HSBC. "But we have other areas of business which are making up for it."

"We are seeing the reemergence of China as an issuer and that's overshadowing the subdued state of Russian issuance."

Fees from China have jumped 48 percent, more than offsetting the 43 percent drop in eastern Europe, TR data shows. Banks' deal making fees in emerging markets for 2014 have risen past $10 billion, or 9 percent more than last year.

Bankers are also confident the Russian lull is temporary, noting for instance that Gulf markets have overcome the hiatus caused by Dubai's 2009 debt crisis.

Hopes are rising that non-sanctioned Russian companies will offer business opportunities after privately owned banks Alfa and Otkritie this week raised small amounts via a bond and loan respectively.

"Clearly for some of the Russian (borrowers), there are issuance opportunities. If issuers are content to pay the new issue premiums, banks will continue to discuss opportunities for new deals," said Peter Charles, head of syndicate at Citi, which was in the top five banks last year in terms of Russia fees.

Funds and syndicate banks will also be keen on the extra yield Russian borrowers will be forced to pay — Gazprom for instance paid a significant yield premium to its existing bonds.

"Intermediaries will want to position themselves for the market regularizing but without taking any risks with regulators and the Gazprom issue captures this," Christopher Granville, managing director of consultancy Trusted Sources, said.

Another investment banker interviewed for this article said there was continued "dialogue" with Russian companies, adding that the latter were "understanding" of Western banks' inability to do deals for sanctioned companies.

Nor is it likely Russian companies will be able to bypass U.S. and European capital markets in future in favor of Asia. Analysts note the small size of the latter and also the example of RusAl, a steel firm which listed in Hong Kong in 2010 but faced heavy scrutiny and restrictions due to high debt levels.

When JPMorgan Chase & Co agreed to lead a $700 million bond offering for Russian natural gas producer Gazprom, it was doing business that some U.S. banks...
news

U.S. to Sanction Sberbank and Other Russian Banks, Report Says

The U.S. will take new steps on Friday to limit the access of major Russian banks, including Sberbank, to U.S. debt and equity markets to punish...
news

Police are investigating a range of Russian banks suspected of illegally moving nearly 700 billion rubles (about $18 billion) out of the country into offshore...
news

Shut out from international markets, with few new deposits while bad loans multiply and funding costs spike, the new reality is a shock for Russian...