A slump in the ruble has made Russian exports more competitive and punished importing companies but, combined with Western sanctions, the weaker currency has complicated life for dozens of the companies which should benefit.

Those companies which took out foreign currency loans are now struggling to refinance the debt, unable to access Western capital markets because of U.S. and EU sanctions over the Ukraine crisis, while those which have relied on domestic production are sitting comfortable.

Here is a factbox outlining which sectors are winning or losing from a weaker ruble, which has lost a third of its value against the dollar since the beginning of the year.

Surgutneftegas, Russia's third largest oil producer, has emerged as a winner from the weaker ruble after amassing 1.3 trillion rubles in cash reserves, some held in foreign currencies on banking deposits.

The slump in the ruble and easing competition from Ukraine are compensating for lower domestic steel demand, said Severstal, Russia's second-biggest steel producer. It narrowed a third-quarter net loss to $45 million due to lower non-cash write-offs. 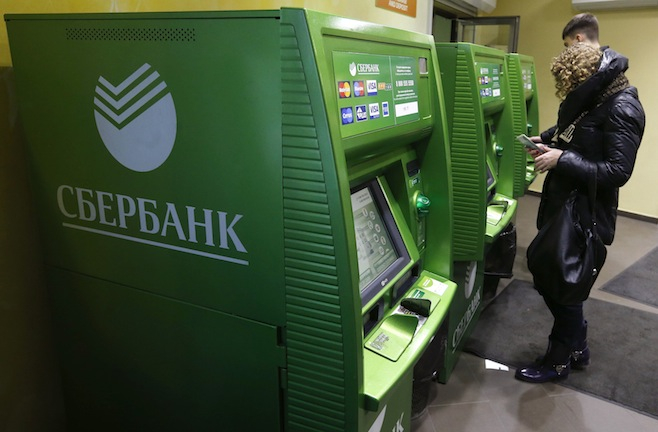 People use an automated teller machine inside a branch of Sberbank in St. Petersburg.

Some Russians are closing accounts, preferring to keep their money in safety deposit boxes or to convert rubles into foreign currencies.

Both Sberbank and VTB, Russia's largest banks, are yet to report Q3 results under international standards.

Sberbank, whose RAS results are pretty much in line with IFRS, said that in nine months it issued 17 percent more in corporate loans, year-on-year, with its corporate loan portfolio adding 218 billion rubles in September alone.

The growth was supported by new loans as well as gains from the revaluation of outstanding loans issued in foreign currencies, Sberbank said.

Still, banks are facing a shortage of foreign currency — U.S. dollars in particular — as Western markets are largely closed to Russian firms due to sanctions and the banks are forced to raise rates to attract both ruble and foreign currency deposits.

VTB 24, a retail banking arm of Russia's second largest bank VTB, which accounts for around 10 percent of retail deposits, saw its forex deposits growing to 38 percent from 33 percent at the beginning of the year, CEO Mikhail Zadornov said last week.

Higher loan demand along with closed capital markets are also squeezing banking capital, forcing some state-controlled banks to ask the state for help.

VTB is seeking up to 200 billion rubles in state support to beef up its capital after already receiving 214 billion to meet local demand and cover losses from Ukraine crisis, Vedomosti daily newspaper said last week.

VTB declined a request for comment on the report.

In a recent report, Fitch said Russian banks were likely to be under pressure in the near-to-medium term due to tighter liquidity because of foreign debt repayments and a slower inflow of customer funding, as well as weaker asset quality and profitability because of the economic slowdown.

"The burden of supporting the sector for the sovereign will increase," Fitch added. 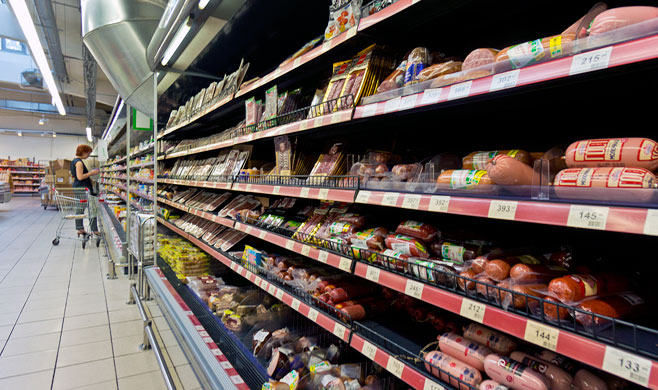 Shoppers browsing for food in a Moscow supermarket.

In early August, Russia banned Western food imports worth about $9 billion in its strongest reaction to Western sanctions so far.

The move triggered a rise in domestic pork and poultry prices, benefiting domestic producers like Cherkizovo.

Rising prices are also pushing up revenues for the country's grocery stores, with X5 Retail Group, Russia's second biggest food retailer, revising upwards its 2014 sales growth guidance to between 17 and 19 percent from 10 to 12 percent.

It saw a strong performance at its low-cost Pyaterochka stores, where customers flocked as the Russian economy weakened.

The big hypermarkets, though, are suffering, unable to switch products quickly after the food import ban.

O'Key cut its 2014 revenues forecast after suggesting that it had been hurt by falling supplies of fruit, vegetables, fish, cheese and other dairy products.

The local currency slump has supported grain exports and boosted the revenues of farmers who are enjoying a near-record crops this year. Russia is one of the world's largest wheat exporters.

Mobile phone operators are taking a hit from spending on capital investments, mainly foreign equipment, as well as from their debts.

MegaFon, Russia's second largest mobile phone operator, saw net profit falling in the third quarter to 12.8 billion rubles from 15.3 billion a year ago because of a revaluation of the company's dollar-denominated obligations.

The company is hoping consumers will not cut spending on telecoms services despite the economic downturn because it accounts for a small portion of their expenses.

The weaker ruble and higher inflation are limiting consumer spending and hitting sales of non-essential goods like cars.

In general, Russian car sales fell 20.1 percent year-on-year in September, after a 26 percent decline in the previous month, according to the Association of European Businesses lobby group.

The Russian car market was once considered among the fastest growing in the world, followed by China. Many global car makers like Nissan, Volkswagen, Toyota, Ford, General Motors and others have production sites in Russia.

Rising demand for foreign currency meant U.S. dollars and euros were unavailable at some Russian banks and exchange points late last week as the ruble...
news

Russian wheat has returned to export markets after several weeks of absence thanks to a weak ruble and higher world prices, offering a bright spot...
news

Russia's cheap but often-derided Lada car is enjoying a modest turnaround from sliding sales, perhaps thanks more to a state scheme designed to counter...
unclear cause