Although information technology was once the darling of Russia's innovation sector, a sanctions-flecked economic slowdown is pushing manufacturing and biomedicine startups to the fore — and thankfully the results are more "Star Trek" than "Star Wars."

At a startup contest at last week's Open Innovations Forum organized by the Russian Venture Company and Moscow's Center for Innovative Development, inventors of robotized industrial solutions and new biomedical products took most of the top prizes, entitling them to a million rubles ($25,000) each in cash and the active interest of venture investors.

This is a big switcheroo: A sudden slump in economic growth rates to near zero this year is culling ventures in the fast-paced and competitive IT sector, but the longer development cycle of manufacturing and biomedicine means it is better placed to whether the slump and promise reliable payoffs, according to Anton Abashkin, director of the Center for Technology and Innovation at PricewaterhouseCoopers.

"For every 10 startups in the IT sector, there might be only one in biomedicine. The latter requires more time and investment, but the returns are higher," he explained.

The Moscow Times interviewed the heads of three project development teams in the field of biomedicine and robotics that earned top marks in the startup competition.

But first, a disclaimer: Many Russian startups do not use completely new technology. Most of the items on show at the forum have been developed already by U.S., European, Japanese and Israeli companies. The novelty is that the technicians have learned to either make, assemble or program them in Russia.

And with depreciation of the ruble — which has lost more than 20 percent of its value against the U.S. dollar this year — inflating the cost of imports, domestic production has suddenly become much more viable.

Using a 3-D printer and their own software and funds, W.E.A.S. Robotics has developed an active robotic arm to replace lost limbs. Existing models of artificial limb replacements are either very expensive or are more about Captain Hook cosmetics than functionality, said Ilya Chekh, the project's founder. Feeling dead to their owners, most are either abandoned or just worn as a cover-up for the disability.

"Our arm has feedback: When the fingers touch something, the motors inside it vibrate, indicating contact," he said, demonstrating an arm that looks like a strapped-on glove with mechanical fingers that clench and unclench in response to muscle movements in the lower arm.

The next step, Chekh said, would be to develop an arm that responds not just to a few limited signals but to the whole muscle group from the shoulder down. 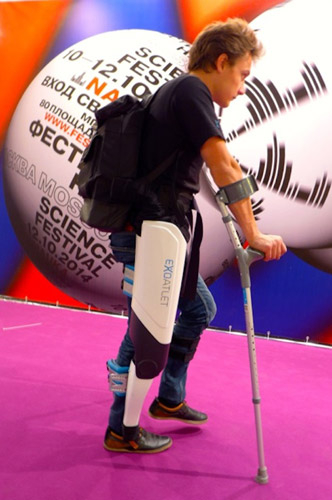 A man demonstrating how to use the ExoAtlet exoskeleton for walking.

Cost: $50,000 with plans to gradually decrease as production allows

The ExoAtlet company has developed a robotic exoskeleton for the lower body that is able to help patients with leg muscle deficiency get into an upright position unaided — a simpler version of models set to revolutionize the United States' and other militaries.

"The exoskeleton is designed to help rehabilitate people who have temporarily lost the ability to stand up and walk as the result of a severe accident, brain hemorrhage or spine surgery," said the project's leader, Yekaterina Berezy.

With motors set in the place of joints, the skeleton — together with a pair of crutches — enables a person to regain mobility, which Berezy says is essential for a person's interior systems to work properly.

The idea is not new: Exoskeletons have been in the works since the late 1960s, but only recently have motors and batteries become powerful, compact and affordable enough to encourage production. Once the necessary parts became available, the ExoAtlet was developed in just one year with the help of a grant from the government, Berezy said. 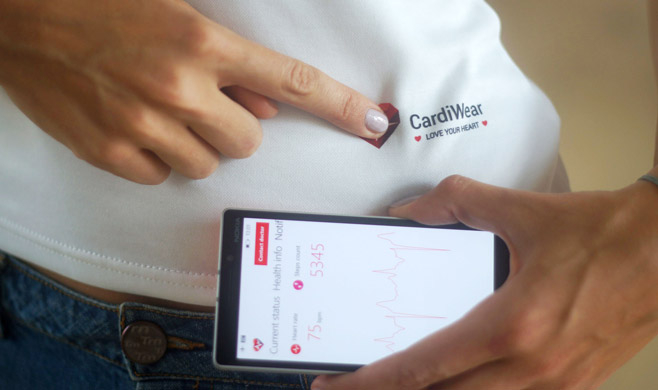 A woman displaying the CardiWear shirt alongside its mobile application.

The idea to create a T-shirt that would record heart performance and analyze the results online — potentially an invaluable tool for anyone from athletes to train drivers — came to four students at Moscow State Technical University this summer. Two of them designed elements of the product as part of their diplomas.

"And then at an event for computer programmers we met a marketing director of CISCO Russia and decided to take it to the masses, to create a T-shirt that would make a cardiogram, send it to a mobile phone and then run an analysis on the results," said Daniil Gromov, one of the students working on the project.

Existing cardio monitoring systems involve a lot of wires and a bulky record box worn on a belt. The idea was to come up with a design that would be comfortable and suitable for sports training, Gromov said.

They took an ordinary close-fitting sports shirt and hooked it up with three insulated wires connected to a reading device the size of a matchbox. Unplug the wires from the box and you can put it in the washing machine.

While practicing, an athlete would get a warning if there was any danger to his heart because of overstrain via a monitoring system connected to the internet through his mobile phone.

But the utility doesn't end there, Gromov said: "We are now in negotiations with Russian Railways to have their train drivers wear these and monitor their health condition," he said, adding that hospitals have expressed interest in the shirt as well.

The commander-in-chief of Russia's Navy said Tuesday that the country's new fifth-generation submarines would be armed with military robots.
news

Despite the fact that Russia went down 11 positions to 62nd place in the 2013 Global Innovation Index, Skolkovo Foundation executives said Thursday...
in the shadows