Iva Nova, a St. Petersburg all-women folk-punk band, may have shrunk to a quartet, but its music has become more diverse and inventive, drifting further away from the typical three-minute song format. The band recently launched its fourth studio album "Krutila Pila," its first in four years, at a concert at Zal Ozhidaniya.

When guitarist Inna Lishenkevich quit in 2012, the band chose not to look for a replacement. "It is always difficult to replace a person, so we thought that we'd try to do without the guitar," said drummer Yekaterina Fyodorova, who formed the band in 2002.

"Guitar is a very obtrusive instrument, it's everywhere; it either plays solo or strums all the time. When you take the guitar out, there emerges emptiness. So it was interesting to fill it with some other little sounds. It became a new turn for us. I bought a sampler, which I have by my side so that I can add some sounds that I like, such as industrial sounds, noises, creaks. There is also more piano and drums now. The sound has become richer and more interesting for us."

"Krutila Pila" was recorded during a short stint in early April with St. Petersburg-based Austrian musician Richard Deutsch, best known for his work with the Czech-Austrian-Turkish band Metamorphosis, as a recording engineer and producer. The recordings were then mastered by Gregor "Keks" Streng at Soundbakery in Vienna, Austria.

The release date was set for September after Iva Nova's return from its summer European tour.

The songs were written over two years since Lishenkevich left. "We kept some to use on the album but played some at the concerts, so they might be not be new for those who were at shows," Fyodorova said.

Of the album's 12 tracks, three are instrumental with some vocals used as a musical instrument.

"With the guitar and Lishenkevich, who was song-oriented, it was more classic songs, but when we started performing without guitar, and everybody bought some devices and processors, it became more about sound. For example, the accordion sounds different at different instances. The album turned out to be more about music than about songs."

Iva Nova's interest in electronic instruments does not dominate their sound, with the band's recent concerts including Fyodorova performing on wooden spoons, which are used as instruments in Russian traditional music.

"I've taught myself to play on spoons and I now have a spoon solo during concerts, which surprises people in Europe because no one plays on wooden spoons there. Audience members come to me and ask questions all the time," she said.

According to Fyodorova, the album was recorded live at the Terminal studios in St. Petersburg, with the band playing together rather than with musicians recording their tracks separately. 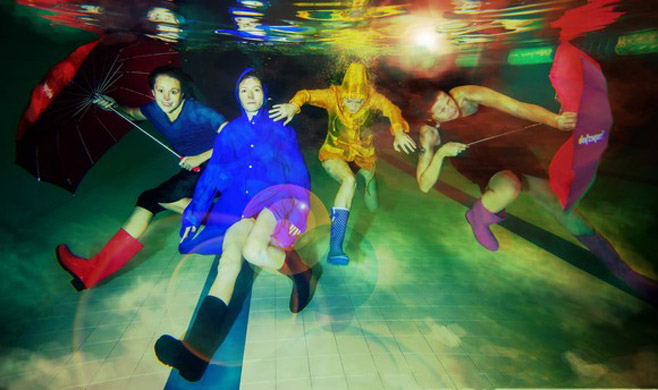 The group Iva Nova mix different styles from electronic to blues to folk.

"This is the first album where we did not invite any guest musicians; everything sounds on the album as it does in concert," she said.

"The only thing that was added is probably backing vocals here and there to make it sound nicer, but that's all. Previously there were friends constantly coming and adding instruments [to the recording]. This time we decided to do everything differently. It resulted in livelier sound."

The notable exception was Albert Kuvezin from the Tuvan ethno-rock band Yat-Kha, who was taken by Iva Nova to the studio while on a passing visit in the city to add some Tuvan throat singing to the song called "Factory 76."

The band's friends were also invited to contribute to the album's closing song, "Waltz of the Deaf Under the Bridges," where about 18 musicians took part by giving input from across Russia and the rest of the world, with Deutsch arranging the sounds into the final track to accompany singer Postnikova reciting her poem. As well as musical instruments, the track features sounds recorded in the streets of Paris and in Pulkovo Airport as well as door, teapot and bathtub noises, while Estonian contemporary composer Ülo Krigul sent a recording of himself playing on an old Soviet-era Krasny Oktyabr piano in Tallinn.

"It turned out to be very St. Petersburg in spirit," Fyodorova said.

Most of the lyrics on the album were written by Postnikova with two songs written to the poems by other people. A song called "Crested Larks" is based on a poem by Russian ego-futurist poet Vasilisk Gnedov, while "Salomea" is based on a poem by actor and director Oleg Zhukovsky, best-known for his work with Anton Adasinsky's avant-garde theater Derevo.

"He came to our concert and recited it while dancing," Fyodorova said.

"We recorded it on a camera and returned to it when working on the album. It was almost impromptu and ended up becoming a strong song."

Apart from Iva Nova's own material, the album also features the band's arrangement "Not a Branch Swayed by a Wind Blow," a Russian folk-based song written by composer Alexander Varlamov and poet Semyon Stromilov that dates back to the 1840s.

"Before, we were sold as an a la Russe, Balkan folk-type of collective, which we weren't," she said.

"Sometimes it was awkward when people came to what they thought was a Balkan disco and had us playing something mournful, some dark blues — we didn't really fit in. Tino presents the band differently and we have started to play at big folk and ethno festivals as well as jazz clubs, as he presents us as an interesting, original collective that experiments and blends different music styles."