ST. PETERSBURG — Zakhar May is an unmatched figure on the Russian music scene. Born in Kharkiv, Ukraine, in 1969, the singer-songwriter with a penchant for unlikely Russian pop covers gained a Russian-language cult following while he was a programmer and blogger living in the United States in the late 1990s and early 2000s.

May, whose music blends rock 'n' roll, reggae and folk punk, released his only full-fledged studio album, "Black Helicopters," with a group of St. Petersburg musicians in 2003, with the rest of his recorded work being mostly live albums and home recordings available on his website, Baza.com.

In 1988, when he was 19 years old, May moved to the U.S. with his parents after the Soviet Union allowed Jewish people to leave during Gorbachev's liberalization in the late 1980s.

He lived in Baltimore, New York, Chicago and San Francisco until 2002, when he came back to Kharkiv after his songs gained underground popularity in his homeland. He then spent several years living in St. Petersburg and Moscow.

Currently based in Kharkiv again, May now performs solo, reaching his Russian-speaking audiences by touring permanently in Ukraine, Russia, Germany, Israel and the U.S.

"I'm a Russian musician and have always been one!" May said in an interview with The St. Petersburg Times ahead of a concert last week at the new installment of the underground club Zoccolo, which moved to Ligovsky Prospekt earlier this year.

"I lived my first 20 years in Kharkiv, then another 15 years in different cities in the [U.S.], then about seven years in Russia. Now I live in Kharkiv again, and I hope to die there as well."

During his stint in St. Petersburg in the early 2000s, May met some of the best-known local rock musicians, such as blues rocker Sergei "Chizh" Chigrakov, as well as some former and then-current members of the rock band DDT, to record "Black Helicopters" under the moniker Zakhar May & Shiva.

With Shiva — which did not have a fixed lineup — May performed around Russia, at music clubs and outdoor rock festivals.

"My younger friends once presented me with a whole box of tapes by Khimera [a pioneering hardcore punk band in St. Petersburg], perhaps to teach me everything at once, without any words. I am still very grateful to St. Petersburg for this."

Last year, May took part in a high-profile outdoor concert in Moscow in support of leading Russian opposition activist Alexei Navalny, who was hit with several criminal cases in the aftermath of the mass anti-Kremlin protests in 2011 and 2012.

"I often write songs live on Twitter," he said, referring to his manner of posting a new line on his Twitter account as soon as it comes into his mind.

"For instance, I wrote the song 'Navalny,' for which I was invited to perform at that concert live, on Twitter about a week earlier, but actually I have loved, respected and promoted Alexei Anatolyevich [Navalny] since the early days of the Russian Internet."

A supporter of the Maidan protests in Kiev and an opponent of Russia's intervention in Ukraine, beginning with the annexation of Crimea in March, he said though that he was not in Ukraine when the protests began late last year.

"I spent that winter in the [U.S.] and supported [the Maidan protests] with everybody from there," he said. 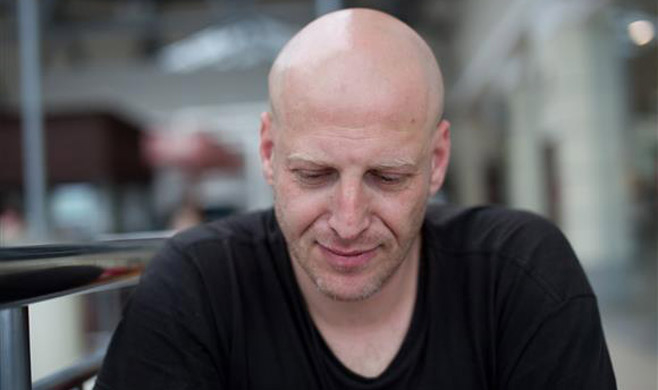 St. Petersburg hardcore punk group Khimera was a big influence on May.

May dismissed the common Russian idea about art and music being outside politics. "As with many things that they talk about in Russia now, this idea has no roots, no history, no sense."

Living in Ukraine, singing in Russian and having U.S. citizenship, May described himself as a Russian, even if only ironically.

"I feel I am a Russian, just as an American Jew in Ukraine should," he said.

Despite Russian polls allegedly showing ever-growing support for Putin over his actions in Ukraine, May noted that his Russian audience has continued to grow.

"My audience in Russia constantly grows, while I am liberal enough to allow it to have a broad liberty of political views," he said.

In 2012, May recorded two songs for "Limonoff," a tribute album to author and political leader Eduard Limonov, whose political parties — the National-Bolshevik Party (NBP) and its successor, the Other Russia, formed after the NBP was banned for extremism — were instrumental in the Russian protest movement of the 2000s.

Even though Limonov and the Other Russia supported the intervention in Ukraine earlier this year, May, who had spoken sympathetically about the National-Bolsheviks in interviews, still abstained from criticizing them.

"They are weird, but they have always been weird," he said.

But May reserved some harsh criticism for liberal-minded rock musicians like Mashina Vremeni's Andrei Makarevich and DDT's Yury Shevchuk, who first spoke out against Russia's intervention in Ukraine but have recently said they were involved in collecting humanitarian aid for people in eastern Ukrainian regions controlled by pro-Russian insurgents.

"I usually explain the confusion in the heads of Shevchuk and Makarevich to myself by their total mental disability, as well as their obvious helplessness in songwriting — no disrespect intended, as polite Americans say," May said.

Still, May spoke out against the cultural boycott of Russia in light of continued hostilities in Ukraine and Russians' alleged support of Putin's actions.

"God forbid," he said. "A permanent and comprehensive exchange is necessary."