The centenary of the Great War is upon us and so too are the innumerable events, publications and reminders of its significance. One recent article in The New Republic listed the "most moving, enlightening novels about World War I." It captured much of the way Russia's experiences have not factored in the cultural memory of the Great War. The list included moving works that ranged from Erich Maria Remarque's "All Quiet on the Western Front" to Virginia Woolf's "Mrs. Dalloway." Yet every book on the list is about the Western Front.

For a variety of reasons, the Eastern Front has not captured the popular imagination. Karen Petrone, in her award-winning book "The Great War in Russian Memory," has argued that the Soviet Union "was unique among the combatants in the virtual absence of public commemoration of World War I at the level of the state, community and civic organizations, or even individual mourning." Lenin and the Bolsheviks declared the Great War to be an imperialist one and instead commemorated their victory in the subsequent Civil War. The lack of official commemoration of the Great War, as Petrone rightly notes, does not mean "the absence of war memory itself." More than 18 million soldiers fought for the Russian Empire, 2 million died, and 5 million suffered injuries: The Great War certainly left its mark on Russia. Because the Bolsheviks did not commemorate these losses and make these connections, however, one must look for memory traces in unfamiliar places. 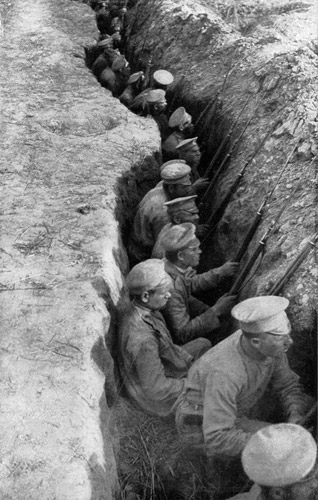 Russians in the trenches awaiting an attack from the Germans in 1917.

The New Republic list indicates that no single work of literature from Russia has entered into the pantheon of memorable Great War novels. It is time to start including some, starting with Boris Pasternak's "Doctor Zhivago," which is often understood in the West as a love story, due in no small part to the influence of David Lean's film adaptation.

Five other Russian books about World War I

Mikhail Sholokhov, "And Quiet Flows the Don" (1934). Much like Pasternak's novel, Sholokhov's is also widely seen as a Civil War tale. Yet the novel itself tells a sweeping history of the Melekhovs, a Cossack family, and starts before 1914 before turning to their experiences in war, revolution and war again. In her recent book "The Great War in Russian Memory," the historian Karen Petrone convincingly demonstrates just how much Sholokhov's epic is a significant contribution to Great War literature. She's right.

S. Ansky, "The Enemy at His Pleasure: A Journey Through the Jewish Pale of Settlement During World War I" (English Translation 2002). In 1914, the Russian-Jewish author S. Ansky [pen name of Shloyme Rappoport] traveled behind the front lines to see for himself how the Jewish residents of the Pale of Settlement had dealt with the war's outbreak. In this gripping account, he details the rumors, the upheaval, and the violence that swept across the Eastern Front. Ansky's descriptions of "one of the darkest periods in Jewish history," a war that "ruined thousands of families," is essential reading.

Maria Bochkareva, "Yashka: My Life as Peasant, Exile, and Soldier" (1919). Born into a peasant family in the Novgorod region, Bochkareva became famous during the Great War first as a front line soldier who received medals for valor and then as the founder of the Women's Battalion of Death, the first women's battalion created in 1917 to fight in the war. Her memoir recounts this fascinating history.
Alexander Solzhenitsyn, "August 1914" (1972). The first volume in the writer's massive Red Wheel series, August 1914 focuses primarily on the Battle of Tannenberg, which was fought between Russian and German forces. Solzhenitsyn packs a lot into his dense narrative, which captures the Russian unpreparedness for war and the mindset of Russian commander Alexander Samsonov, who committed suicide after the Russian defeat.

Konstantin Fedin, "Cities and Years" (1924). Fedin's novel jumps back and forth in time and tells the story of an intellectual, Andrei Startsov, through the tumultuous years of the Great War, revolutions of 1917, and civil war. Startsov is in Germany as the war opens, and Fedin recounts how he is arrested as an enemy. Although the novel is both experimental in its structure and reflects the Bolshevik ideas about the Great War's meaning, its exposure of the war's hypocrisies make it a worthy addition to any reading list.

Yet the novel is mostly about the experience of an everyman through the upheavals of the early 20th century. It is a story framed by wars and their legacies, from the Russo-Japanese War through the Civil War. The Great War and its immediate effects form the central component to Parts 4, 5 and 6. In them, Yury Zhivago serves as a doctor at the front. Much like novels set in the Western Front, Zhivago's war is one filled with confusion, death and senseless violence. Zhivago tells a colleague at the front lines "how hard it was to get used to the bloody logic of mutual destruction, to the sight of the wounded, especially to the horrors of some modern wounds, to the mutilated survivors that present-day technology turned into hunks of disfigured flesh." In one moving scene, we are confronted with a mutilated soldier, whose face has been split open by a shell, "turning his tongue and teeth into a bloody gruel, but without killing him." These are descriptions that could just have easily been lifted from the pages of Remarque, Henri Barbusse or any of the other classic Great War novels. In its description of the violence inflicted on men's bodies, "Doctor Zhivago" is very much a Great War work.

Pasternak also recounts the war behind the front lines. Zhivago witnesses a Cossack mock a Jewish resident in a village. After he orders the soldier to stop, Zhivago subsequently tells a colleague that "you can hardly imagine what cup of suffering the unfortunate Jewish populace has drunk during this war," correctly noting that "it is being conducted right within the pale of their forced settlement." To add insult to injury, Zhivago ironically states that Russia's Jewish population has endured the "added reward of pogroms, taunts and the accusation that these people lack patriotism." "Doctor Zhivago" poignantly captures the upheaval of the war, the movement of peoples during it, and the effects violence has on the noncombatants unlucky enough to live in war zones. The fictional town of Meliuzeevo is described as a place where the "black dust raised by the troops and wagon trains that kept pouring into it" hang over the roofs "like a swarm of locusts." For the townspeople, the troops "moved from morning to evening in both directions, from the war and to the war, and it was impossible to say exactly whether it was still going on or was already over." Just as he captures the violence the war inflicted upon individual soldiers, Pasternak also eloquently writes about the harm done to noncombatants.

Zhivago is wounded by shrapnel just as he is evacuating his frontline hospital. He finds himself in the care of Lara, the third time he has encountered her. As she cares for the wounded, Lara muses that "not long ago there was a sacred duty to the motherland, military valor, lofty social feelings," but that now the war is lost and these ideals seem foolish. Zhivago witnesses the effects of the February Revolution and the provisional government's continued attempts to wage the war during his time of convalescence. A representative of the new government, Gintz, comes to the front where Zhivago is recuperating. The young commissar spouts empty patriotic rhetoric and is eventually lynched by the soldiers. As this violent episode is reaching its end, Zhivago contemplates what the war has brought to his homeland: "Think, the roof over the whole of Russia has been torn off, and we and all the people find ourselves under the open sky." The end result, at least temporarily, is that the war brought unexpected freedom to Russia. "The war did half of it," Zhivago remarks to Lara, "the rest was completed by the revolution. The war was an artificial interruption of life," while the revolution meant that "everyone revived, was reborn, in everyone there are transformations, upheavals. You might say that everyone went through two revolutions, one his own, personal, the other general." For the doctor, the experience of the front and the subsequent February Revolution has produced a change within him, one that leads to his declaration that "in these days, one longs so much to live honestly and productively!" 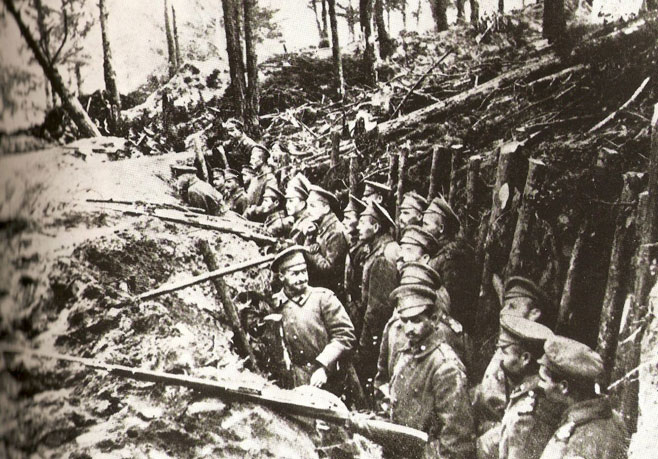 A Russian forest trench in the Battle of Sarikamish in the Caucasus front.

When he returns to Moscow, Zhivago, like so many other fictional protagonists from Great War novels, figures out just how difficult this wish is. His family does not know him anymore. The chaos unleashed by the war brings another violent conflict. This civil war and the subsequent relationship that develops between Yury and Lara are aspects from Pasternak's novel that are more well-known. Yet they make little sense without grasping the transformation Zhivago has gone through because of his experiences in the Great War. The greatest Russian novel of the 20th century, in short, is also a great novel about the Great War. Perhaps future list-makers will begin to treat it as such.

Stephen M. Norris is professor of history and assistant director of Havighurst Center for Russian and Post-Soviet Studies at Miami University (Ohio).