Fans of legendary British film director Alfred Hitchcock are in for a treat this week, as the British Council's "Hitchcock 9" festival is due to run until Saturday at the Strelka Institute for Media, Architecture and Design. Part of the U.K.-Russia "Year of Culture," the festival will show nine of Hitchcock's lesser-known silent movies from the 1920s that have been lovingly restored by the British Film Institute (BFI).

At the glittering opening event in Strelka on Friday evening, Muscovites in black-and-white attire mingled with British film experts, sipping martinis in the evening heat. The festival kicked off with a showing of "The Ring," a 1927 film about a love triangle between two boxers and a woman, accompanied by British jazz musician Soweto Kinch and his band. Paul de Quincey of the British Council invited all present to attend the events taking place throughout the week, including more film screenings; lectures and workshops by well-known British and Russian film experts; and even a treasure hunt nearby, around the former Red October chocolate factory.

Robin Baker of the BFI told The Moscow Times about the restoration process that brought these films, many of which were badly damaged, back to life. The process took four years and was the largest restoration project ever undertaken by the BFI. Many of the films were rescored for musical accompaniment, and all films shown during the festival will be accompanied by accomplished musicians, including British pianist John Sweeney, who regularly plays for silent films at the National Film Theater in London. All the films have been "completely transformed," according to Baker, who recommends "The Pleasure Garden" (1925), his favorite of the nine. When asked whether Hitchcock's silent films could compare to his later work in Hollywood, Baker responded simply: "If you haven't seen the silent films, you don't know Hitchcock."

The "Hitchcock 9" festival has already been seen by audiences in more than 30 countries around the world, from Shanghai to Rio de Janeiro. Hitchcock can still pull in the crowds: "Blackmail" (1929) was recently screened in Odessa as part of the festival, and it drew an audience of 25,000. The events in Moscow seem to be just as popular: Strelka described the festival as their "key event of the summer" and said there was "enormous interest" in the educational program in particular.

That program includes guest speakers such as film critic and journalist Ian Hadyn Smith. At the opening event, Smith praised Hitchcock's constant level of invention and humor, and called his silent films "incredibly accomplished." He jokingly conceded that he was somewhat of a "Hitchcock stalker," as Russia is the fifth country he has followed the "Hitchcock 9" festival to since it has opened. Smith is due to give two lectures during the festival, one which will deal with Hitchcock's life and his "brand," and the other about how he created the notion of suspense, for which he was famous. 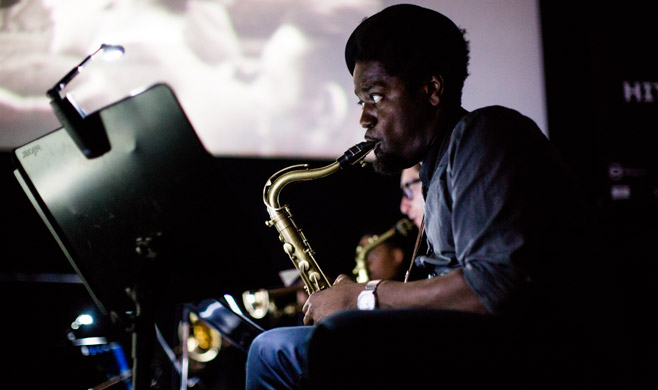 Soweto Kinch wrote the score to the restored version of "The Ring."

Professor Charles Barr from the University of East Anglia, who helped set up one of the first British academic programs in film theory and history, will also give a lecture during the festival. "If we had to pick a single person to represent the 20th-century medium of cinema, Hitchcock would be a good choice," Barr said. "He appeals equally to the general public and to the film theorist." This will be Barr's first time in Russia, and his lecture "Untold Stories" will focus on unfamiliar areas of Hitchcock's life and work, "because he was so secretive and careful in controlling his own image and the narrative of his career, there are still aspects of his life that are unfamiliar."

Both Smith and Barr stressed the importance of the U.K.-Russia "Year of Culture" in the current political climate. "Such initiatives must be very important indeed, especially at times of political tensions. The silent Hitchcock event is an excellent initiative, and I look forward to finding out more about other such exchanges," Barr said.

"Culture is an absolutely essential component of human discourse. Hitchcock's work is an excellent example of this. His main themes — desire, love, envy and pain — are feelings that aren't limited to one nation and culture. They speak of the human condition. Nothing is more universal than that," Smith said.

The British Council also remained optimistic, saying the "Year of Culture" would still go ahead even though the British government recently said officials would not attend such events. "We're naturally concerned about the situation in Ukraine and the current political tensions. When political or diplomatic relations become difficult, we believe that cultural exchange helps to maintain open dialogue," said a spokeswoman from the British Council. "The British Council is a non-political organization committed to people-to-people engagement, and we hope that exhibitions, shows and performances in Russia will go ahead as planned."

As Smith mentioned, Hitchcock made his films to be seen by an audience, preferably in movie theaters. Silent films, accompanied by live music, are like theater and should be seen with other people. So grab your sparkliest flapper dress and check out the movies. If you need some inspiration, head to the "Fashion and Cinema in the Roaring 1920s" lecture on Monday at 7:30 p.m. But most of all, enjoy the privilege of seeing a cinematic master's works restored in all their glory. Forget about the political tensions for a while. Sit back and enjoy the movies with friends, preferably with a cold cocktail.

The "Hitchcock 9" festival runs till Aug. 9 at the Strelka Institute for Media, Architecture and Design. Sign up for all events on the British Council website: www.britishcouncil.ru.

Upcycling and sustainable fashion were among the top trends on the runway.
obituary

Rogozhkin was a master of both comedy and drama, television and film.
long read

How to make three kinds of savory stuffed pastries that even a Russian husband will love.