Contribute Today
By Ivan Nechepurenko
May 6, 2014

Residents of Slovyansk were likely shocked to hear from Ukraine's Deputy Interior Minister in early April that an order had been given to pro-Russian separatists to seize kindergartens in the ongoing conflict in Ukraine.

They must have been equally baffled later in April to hear that the leaflets being dropped by helicopter by the Ukrainian military were a trick — and that anybody picking them up would be shot on sight.

But these reports, later denied and debunked, are part of what analysts say is common practice in any conflict — a propaganda tool meant to dehumanize the enemy that has been used frequently during the conflict in Ukraine, on both sides of the political spectrum.

Mikhail Pogrebinsky, a political scientist at Kiev's Center for Political Research and Conflictology, said such a method of distorting reality could be used to justify violence.

"If you call people insects then it means you can step over them and kill them without any remorse," Pogrebinsky said.

"What happens is that white is called black and vice versa, and people are portrayed as not human, which then warrants violence against them," Pogrebinsky said.

From kindergartens under siege to poisoned water and tea and concentration camps, The Moscow Times has compiled a list of some of the most bogus horror stories that have emerged during the Ukraine crisis.

By now, everyone and their mother has heard the tale of the unsuspecting visitor to Kiev accepting a cup of tea from a kind stranger on Independence Square during last fall's protests — only to find that the drink had been drugged in an elaborate ploy to recruit unruly protesters for the Maidan movement. Rumors of drugged tea made the rounds throughout social media, with many warning their friends against falling for such a trick. There has not been confirmation that such a thing was taking place, but — fortunately for those who enjoy such tall tales — the large quantity of tea being handed out in those turbulent months makes it nearly impossible to refute the myth.

In early April, Ukrainian media and Ukraine's Deputy Interior Minister Nikolai Velikovich warned that the self-proclaimed people's mayor of Slovyansk, Vyacheslav Ponomaryov, had given an order to pro-Russian militants to capture all kindergartens in the city. The move was meant to protect the pro-Russian separatists from attack by the Ukrainian military, as the military would be reluctant to strike women and children. Ponomaryov later refuted this rumor.

Ponomaryov was the center of another rumor weeks later, which said he had threatened to shoot anyone cooperating with Ukrainian soldiers and anyone who picked up and read the leaflets that the Ukrainian Army had been dropping from helicopters. Ponomaryov later refuted this rumor as well. 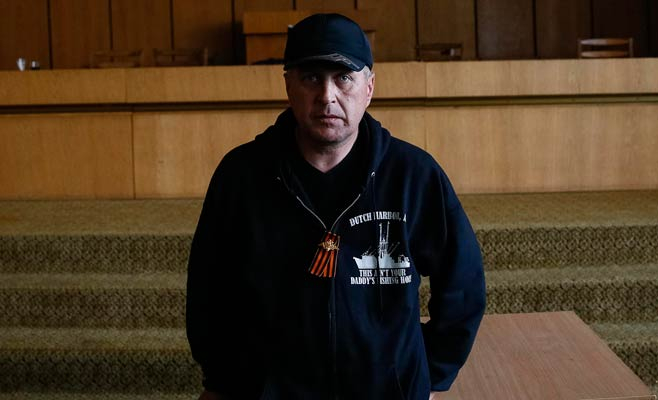 Crimean Tatars were terrified in mid-April by a document purporting to show that they were soon going to be deported from the peninsula to the Kostroma, Rostov and Nizhny Novgorod regions of Russia. A counterfeit document detailing the procedure allegedly issued by the Federal Migration Service was published on Russia's parliamentary newspaper's website on April 13. The paper later published a statement saying that the document had appeared on its website as the result of an attack by hackers.

The Ukrainian Security Service, or SBU, said late last week that separatists in Donetsk planned to blow up a water reservoir that feeds the region to deprive the population of water. Ukraine's top law enforcement agency said the militants intended to use explosives stolen from Donetsk's mines. The facility's security was tightened as a result of the report, and the rumors forced Donetsk Mayor Alexander Lukianchenko to issue a statement reassuring that the city would not be cut off from water, and that the water would not be poisoned.

"My official claim is that water in Donetsk is in line with all requirements, and is checked every hour," Lukianchenko said in a statement posted on his website on Monday.

While many were afraid that pro-Russian militants had been behind plans to contaminate the water, others said that it was actually members of the radical Right Sector group — a clear sign that both sides of the conflict are resorting to such propaganda tactics.

Despite Lukianchenko's reassurances on Monday, the rumor had its desired effect and prompted residents to panic. People were so concerned that they formed massive lines to stock up on bottled water and food products in case of the rumored catastrophe.

Last Monday, Ukraine's counterintelligence unit published an alarming report: the agency said it had seized 1.5 kilograms of a substance that it said might be the uranium-235 isotope, which can be used to make a dirty nuclear bomb. According to the agency's report, nine people were also detained in connection with the substance, one of them a Russian citizen. Those detained were allegedly transporting the substance from the neighboring self-proclaimed Transdnestr republic. On Tuesday, Transdnestr's authorities denied the claim, however, saying that there are no facilities on its territory capable of producing the fissile material.

Rumors about the ultranationalist Right Sector group have figured prominently in many myths in the conflict and served as one of the main catalysts for popular unrest in Ukraine's east, as well as for the swift organization of the referendum in Crimea in March.

A rumor about  Right Sector being on its way to besiege the town of Rovenki in the Luhansk region nearly caused mass hysteria in April, when it prompted people of all sides of the political spectrum to take to the streets and nearly caused clashes between them.

Russia's Foreign Ministry has also issued statements that have led to panic.  On April 28, the ministry published a statement in which it expressed "grave concern" over the alleged construction of "fascist concentration camps" in Ukraine under the guise of migrant detention centers. The rumor spread throughout multiple media publications and caused an uproar among Ukrainians in the east. Ukraine's Foreign Affairs ministry quickly issued a refutation.

Perhaps the most far-fetched report, however, came from a Ukrainian journalist, Roman Burko, who said in April that Russia was developing a mobile weapon capable of suppressing an individual's psychological free will — in short, a tool to turn someone into a zombie. The weapon  would also allow people's thoughts to be read from a distance, according to Burko.

There has been no confirmation of such a phenomenon.

Do Russians support the war in Ukraine? This question has been discussed intensely since the invasion in February. According to surveys from major Russian...
police attacked

Police in Russia's Rostov region are searching for a suspected deserter from the Russian army who shot at police officers in the southern Russian city...
bare shelves

Russian bookstores have started removing LGBT-themed works from their catalogues after President Vladimir Putin signed a wide-reaching ban on expressions...
BEHIND THE LINES