LVIV — The marginal ultranationalist group so despised in Russia for its dalliance with anti-Semitism and violent role in toppling the legitimate government in Ukraine two months ago has traded in its body armor and ski masks for aprons and paintbrushes in Lviv.

Street fighters known for their confrontational stance and open militancy, Right Sector has opened a cafe and art gallery in the country's heartland of Ukrainian nationalism.

Tourists and locals drink and dine alongside each other under Right Sector's distinctive black and red banners. The inside of the cafe is full of kitsch paintings by local artists — as well as Molotov cocktails, body armor and other trophies acquired during months of battles with riot police in Kiev.

The waiters, mostly teenage boys, are dressed in traditional embroidered shirts, wear their hair in Ukrainian topknots and refuse to speak in Russian.

Even in Lviv such an open, or rather, militant display of nationalist identity would have been impossible just a few months ago. 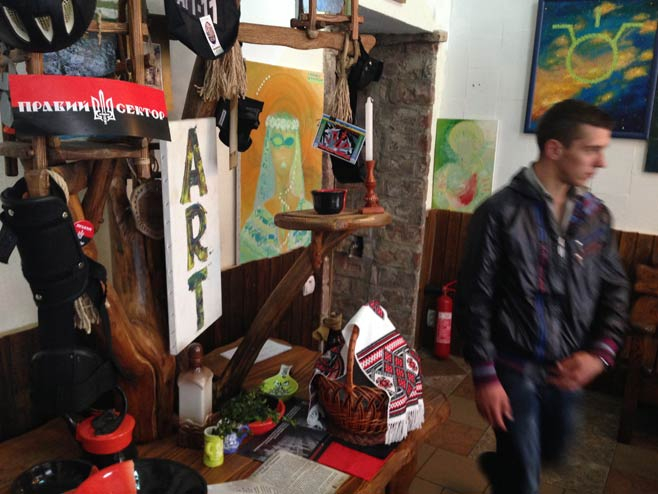 Body armour and mugs on sale in the Right Sector cafe in Lviv.

"It is a very good time [for Right Sector and other extremists] because we have a common enemy in Russia," said Father Stepan Sus, a priest at the Greek Catholic Church of Peter and Paul in Lviv.

For centuries, western Ukraine was part of Poland and then the Austro-Hungarian Empire until the latter collapsed in World War I.

During the chaos that followed the Russian Revolution in 1917, Ukrainian nationalists fought Poles, Germans, and both White and Red Russian armies.

Lviv only became part of the Soviet Union in 1944 as the advancing Red Army wrested Eastern Europe from the Nazis. 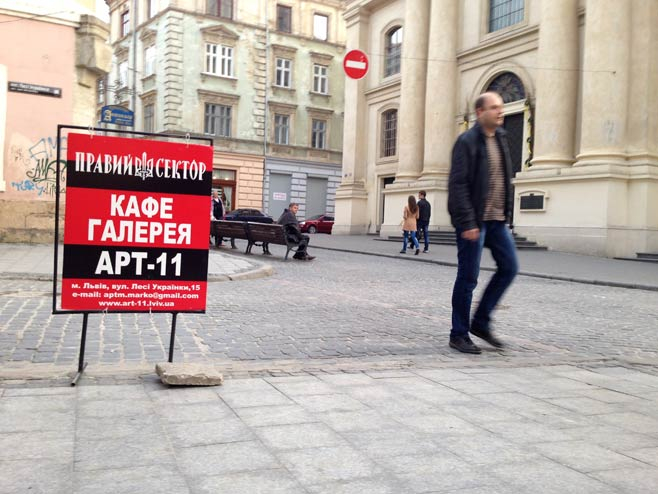 A sign advertising the Right Sector cafe and gallery in central Lviv.

Today there is no confusion in the minds of most Ukrainian nationalists about the nation that poses the greatest threat to their country's independence.

President Vladimir Putin has done nothing to quell these fears.

In a live question and answer session on April 17, Putin said that Ukrainian nationalism in the west of the country was nothing more than resentment at being treated like second-class citizens for hundreds of years.

Putin has also publicly spoken of "Novorossia" — a piece of historical territory that stretches from Russia's western border to the Black Sea city of Odessa. It is resurrection would split modern Ukraine in two.

Antipathy toward Putin is hard to escape in Lviv. T-shirts reading "Putin Kiss My [Expletive]" and "Thank God I am not a Moskal [a derogatory term for a Russian]" are easily found on Lviv's streets. Doormats with Putin's face on them are on sale at tourist stalls. 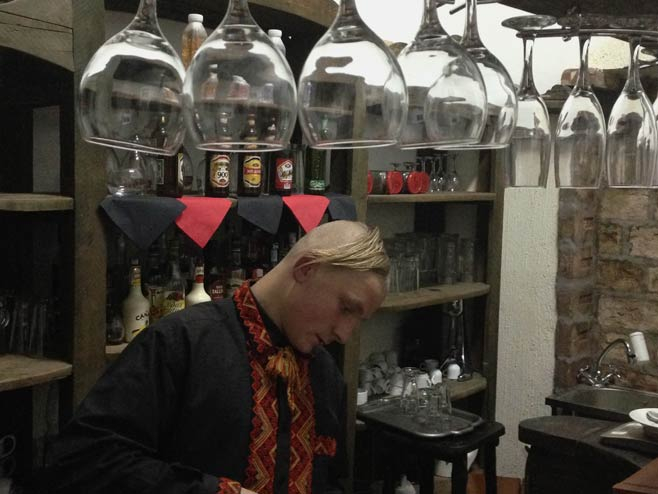 A general boycott of Russian goods is also gathering pace, and organizers have even developed android apps to identify Russian-produced items.

For many Russians, Bandera's brief alliance with Hitler's Germany and the collusion of Ukrainian nationalists under his command in the killings of Jews makes him nothing more than a fascist traitor and an anti-Semite.

But he is venerated in western Ukraine as a freedom fighter, and his image is displayed prominently on government buildings across the region.

Bandera's legacy played an important role in the uprising against ousted President Viktor Yanukovych. In one notable moment, nationalists paraded through the streets of Kiev carrying flaming torches on Jan. 1 — Bandera's birthday.

Lviv has a large statue of Bandera, which was unveiled despite opposition in 2007. 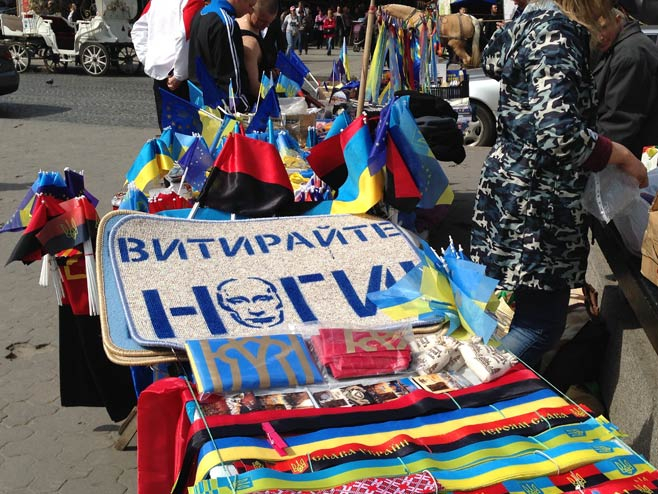 Souvenir doormats on sale in Lviv asking visitors to wipe their feet on Putin's face.

Taras Boblik, a former police officer, was standing by the statue on a recent mild evening, watching his son ride his bike.

"I am for Bandera and anyone who is for the independence of their country," he said. "Not for people who raise the flag of another country on Ukrainian soil."

Right Sector's transformation from a fringe group to a power player in Kiev has been rapid and dramatic.

The organization was set up last year as protests against Yanukovych gained momentum, and until a few months ago, it did not even have a website. While not expected to gather significant support, its once-secretive leader, Dmytro Yarosh, is a credible candidate in presidential elections scheduled for May 25.

Key parts of the group's appeal are its anti-Russian rhetoric and hunger for violent confrontation. Yarosh announced last week that he was forming an 800-strong paramilitary unit to counter potential Russian aggression in the east. 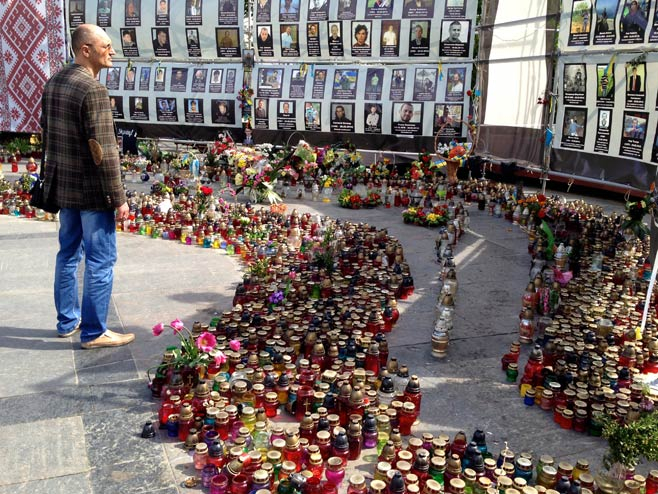 A memorial in Lviv to anti-government protesters killed in Kiev.

"The Russians are right to be afraid of us," said Oksana Macheus, who set up the Right Sector cafe in Lviv with her brother less than a month ago.

But Right Sector's draw also lies in a growing disillusionment with the new regime in Kiev, which is seen to have failed to parry Russian aggression.

Katerina Moisiyenko, who was drinking beer with a friend outside the cafe in Lviv, said she was a supporter of the radical group.

"The government in Kiev only talks, they do not actually do anything," she said.