Editor's Note: This is the third article in a series that focuses on three sites of memory in the new Ukraine. The three articles examine connections between memory and national identity and discuss the ways that perceptions of the past have produced debates connected to the ongoing crisis. Read the previous articles: Ukraine's New Sites of Memory: A Candle in Kiev; Ukraine's Sites of Memory: Chernobyl in the Heart

On Jan. 22, 2010, then-President Viktor Yushchenko awarded Stepan Bandera the title "Hero of Ukraine." The decision met with official anger from the Russian government, the Simon Wiesenthal Center and other organizations. It also angered the many Ukrainians who viewed Bandera as a traitor.

Just a year later, the new president of Ukraine, Viktor Yanukovych, rescinded the honor. Given that Stepan Bandera had been dead for more than 50 years when this reversal took place, the controversy reflects the ways that historical memory has developed over the previous half-century, and how it remains divisive.

This memory work has produced at least two Banderas, both fought over in the "Hero of Ukraine" controversy, and yet both constructions ignore inconvenient facts. These Banderas of memory tell us a great deal about the cultures of remembrance that have evolved in Russia and Ukraine since the end of World War II. "Stepan Bandera" is therefore a very particular site of memory that captures multivalent interpretations. His name alone functions as a metaphoric weapon in the ongoing conflict between the two neighboring states.

The first Bandera of memory, and the dominant one constructed after 1945 by the Soviet state, was to link his name with fascism, collaboration with the Nazis, and anti-Soviet activities. The name "Bandera" or "Banderists" served as shorthand for these topics. This first Bandera of memory focused on the man who grew up an ethnic Ukrainian in post-World War I Poland and who began to gravitate toward fascist politics in the 1920s.

This is the Bandera who joined the Organization of Ukrainian Nationalists, or OUN, and who viewed Nazi Germany as an ally to create an independent Ukraine. Bandera was held in German concentration camps during the early stages of World War II, but his followers collaborated with the Nazis. Although the OUN broke into different units, one of them, the Ukrainian Insurgent Army, UPA, engaged in resistance to the Red Army as the war turned against Nazi Germany.  When Bandera was released from prison in 1944, he did not return to Ukraine, but served as a symbol for these forces. Bandera remained in Germany after the war and those who fought in his name did so to bring about a Ukraine independent of the Soviet Union.

This is the Bandera condemned first by Soviet and then by Russian governments. In his Feb. 18 speech announcing the annexation of Crimea, President Vladimir Putin was quick to divide the Maidan protestors between those who wanted peaceful change and the "nationalists, neo-Nazis, Russophobes, and anti-Semites" who supposedly led an illegal coup against Viktor Yanukovych.  This second group consisted of "the ideological heirs of Bandera, Hitler's accomplice during World War II." 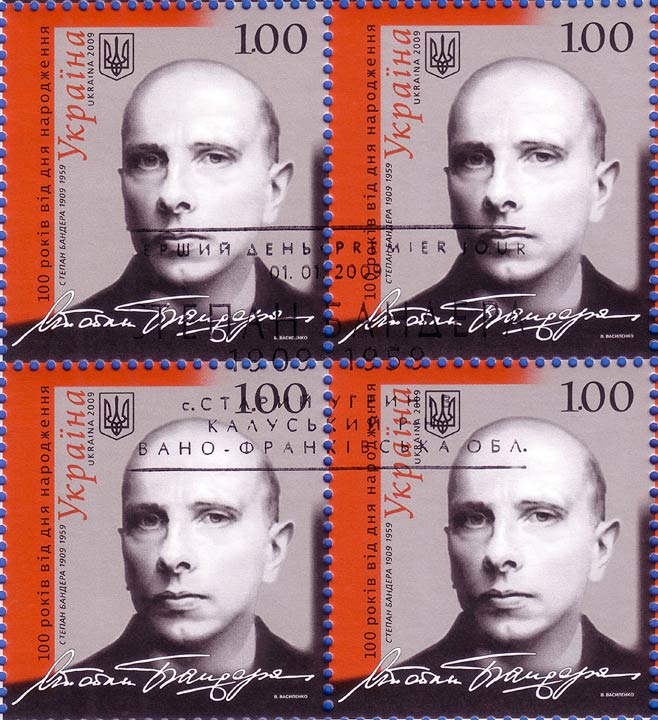 As a follow-up to this branding of present-day Ukrainian nationalists as Bandera's heirs, the Russian Defense Ministry declassified and widely disseminated a series of documents on April 3 that demonstrated the ties between Ukrainian guerillas fighting under Bandera's name and the Nazis. Bandera, in other words, continues to be a Nazi collaborator more than 65 years after the war. In Putin's vision, so too is any Ukrainian nationalist.

The second Bandera is one that invokes some of the same years and activities as the first, but with a different interpretation of their meanings. This is the Bandera promoted as a Hero of Ukraine in 2010 and the one seen in statues, street names, posters, banners and graffiti throughout western Ukraine. "Bandera is Our Hero" is a popular inscription today in the parts of the country that the actual Bandera lived.

In this historical memory work, Stepan Bandera was first and foremost a Ukrainian patriot working to bring about an independent nation. His gravitation toward fascism and the Nazis was, in this view, a necessary one in order to bring about the larger goal of independence. More importantly, the heroic Bandera of memory is the person who continued the fight after the war and who was martyred for it: in 1959, KGB agents assassinated him in Munich.

If the first Bandera of memory tends to downplay the real Bandera's attempts to bring about Ukrainian independence in favor of viewing him solely as Hitler's ally, this second Bandera ignores the real fact that Bandera's forces engaged in massive violence during and after the war in order to depict him solely as a freedom fighter who always fought against Soviet oppression.

These first two Banderas function as sites of memory used to argue about the legacies of World War II and subsequent incorporation of western Ukrainian lands within the U.S.S.R. "Bandera" becomes shorthand for either seeing the Soviet project in these lands as a liberation — one Bandera resisted — or a subjugation — one Bandera aimed to prevent, depending on your viewpoint in these battles. This memory war tends to obscure or downplay the role Bandera and his supporters had in the ethnic cleansing of western Ukraine. UPA partisans, as Timothy Snyder has written, "murdered tens of thousands of Poles, most of them women and children," during and immediately after the war. They also murdered thousands of Ukrainians who did not share their vision of an ethnically pure, independent Ukraine. Still more of Bandera's supporters participated in murders of the Jewish population in the region, doing their part to make western Ukraine more ethnically homogenous after 1945.

Of course, the Banderas of memory are all constituent parts of the one real Stepan Bandera. He and his followers did ally with the Nazis, they did seek to bring about an independent Ukraine, and they did engage in mass violence. As long as the battles over his name and his legacies continue to separate out inconvenient facts of his life and the lives of his followers in order to depict Bandera as either a pure hero or pure villain, his name will continue to be a divisive weapon.

Stephen M. Norris is professor of History and assistant director of the Havighurst Center for Russian and Post-Soviet Studies at Miami University (OH). Contact him at artsreporter@imedia.ru.