A week after President Vladimir Putin declared Crimea a new region of Russia, the peninsula has begun its Russian makeover.

Ukrainian flags have been replaced by Russian tricolors on government buildings, military installations and public property. The ruble is now being used in daily transactions. Crimean residents are applying for Russian passports and will be adjusting their clocks to Moscow time later this week.

But along with these prominent changes is an array of more complex and often fraught transformations involved in joining the Russian Federation.

Among the more subtle changes is the adoption of Russian health and drug control regulations, which do not all correspond to those in Ukraine despite decades of common Soviet practices. One group in Crimea whose treatment will be particularly affected is the roughly 14,000 users of intravenous drugs, according to the International HIV/AIDS Alliance.

Some 800 patients are currently undergoing opioid substitution therapy, or OST, in Crimea, a treatment that helps wean them off illegal narcotics with substitutes like methadone and buprenorphine. The method is largely viewed as a way to tackle HIV and other diseases linked to drug injections.

OST is legal in Ukraine but is banned in Russia, and Russia's Federal Drug Control Service head Viktor Ivanov announced last week that the practice would soon be prohibited in Crimea as well.

Karen Madoian, the senior communications manager of the Ukrainian branch of the International HIV/AIDS Alliance, told The Moscow Times that the organization was currently trying to negotiate the delivery of a methadone shipment to Crimea with the Ukrainian Health Ministry, after having received the consent of Crimean authorities.

"We received a letter from the Ministry of Health of Crimea that said we could continue OST a little longer during the transition period," Madoian said by telephone from Kiev. "We now are focusing our efforts on getting a shipment of methadone to our patients in Crimea."

Not all the new beginnings for Crimea residents are quite so traumatic.

Frequent fliers will have to spend more time in the sky — the Aeroflot flight between Moscow and Simferopol is now 2 1/2 hours, an hour longer than before Russia's takeover of Crimea, because the flight does not travel through Ukrainian airspace. Football fans might have to become more familiar with the Russian Premier League, which Crimea's two clubs, Tavria and Sevastopol, may join.

At schools, teachers and administrators are starting to contemplate the transition to the Russian education system as of Sept. 1. Education and Science Minister Dmitry Livanov has given assurances that Crimea's 200,000 schoolchildren will be eased into the new system as smoothly as possible, but Crimean education professionals are still in the dark about the impending changes to their curricula. 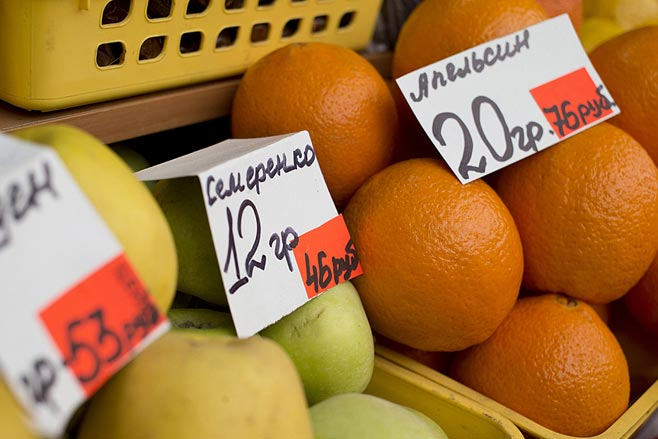 Apples and oranges in Crimea shown with prices in rubles and hryvnias.

Olga Skrebets, the principal of Simferopol's General Education School No. 31, said the current school year would end in accordance with the Ukrainian program. She said she remained uncertain about the parameters of her school's transition into the Russian education system.

"Right now there are more questions than answers," Skrebets said in a telephone interview. "It would have been impossible to adopt the Russian program now and throw everything else away at a time when students are already preparing for end-of-year exams. But come Sept. 1, we will be adopting the full Russian education program. We are still waiting to find out more about how this will happen."

Skrebets also expressed concern about her school's Ukrainian students, who are now studying in a foreign country.

"We have 200 Ukrainian children from cities including Kharkiv and Donetsk studying at our school," Skrebets said. "We are in contact with their parents about whether they will receive a Russian education, or return to Ukraine to follow the Ukrainian program. In the new program,  Ukrainian history and literature will no longer be mandatory."

"I think that these students' parents like our school and that their children will probably stay here, but things are still up in the air at this point."

The Education and Science Ministry nonetheless opened testing facilities in the Crimean cities of Simferopol, Sevastopol, Feodosia and Kerch for high school students who wanted to take the Russian exams.

Uncertainty and unanswered questions also remain in other state services, including at the peninsula's post offices.

"They do not tell us anything," said Svetlana Otashkova, a postal worker from Yalta's post office No. 7, in a telephone interview, shouting over the racket of rowdy customers. "I do not know whether we now belong to the Russian postal services or if we are still in the Ukrainian one. We have not started working in rubles yet, and work has been the same as usual. We do not really know what is going on."

Russian Post announced that domestic tariffs would apply to Crimea starting on March 25. But on the morning of March 26, the cost of a stamp to send a letter to Crimea was still a mystery at one Moscow post office.

"I do not know how much sending a letter to Crimea would cost now," said Olga Ilyukhina, a postal service worker in southeastern Moscow. "It was 25 rubles before, the price for sending letters abroad. I guess we would use a domestic stamp now. But I honestly do not know."