The West warned Tuesday that sanctions against Russia could be introduced as early as this week unless the Kremlin changes its position on the Crimea crisis.

As international tensions escalated over the occupation of Crimea by forces widely believed to be Russian, ousted Ukrainian President Viktor Yanukovych held a second news conference in the Russian city of Rostov-on-Don in which he lashed out at the West and the current Ukrainian authorities and vowed to return to Kiev, reassuring the audience that he was still the legitimate head of state.

Western countries have described Russia's involvement in Crimea as an act of aggression and argued that the peninsula's bid to become independent and join Russia was illegitimate and possibly orchestrated by the Kremlin.

The Kremlin, for its part, has said the troops that have occupied Crimea are not Russian forces but local self-defense units, and that the peninsula's bid to join Russia was legitimate.

So far, measures taken by the West to resolve the crisis have focused on possible sanctions against Russia, and the threat of sanctions has gained momentum as the Crimean referendum set for Sunday approaches.

French Foreign Minister Laurent Fabius said on Tuesday that European Union sanctions against Russia could be imposed as early as this week if Moscow failed to make concessions, Reuters reported.

Fabius also said that Crimea's referendum on independence was illegitimate and that the annexation of the region by Russia would be illegal.

"We cannot accept something that is illegal and which would also have very serious consequences," Fabius said.

German Foreign Minister Frank-Walter Steinmeier shared this sentiment, saying that the EU would start preparing further responses to Russia's actions in Ukraine if Moscow did not change its stance by the weekend.

"If the weekend passes without a visible change in Russia's conduct, then on Monday in the European [foreign affairs] council we will have to discuss a next stage of measures," he said. "We do not want confrontation but the action of the Russian side, unfortunately, makes it necessary for us to prepare, as I have just outlined to you."

Last week the U.S. said that it would impose visa restrictions and asset freezes on Russian officials linked to the invasion of Crimea, while the EU said it would halt visa negotiations with Moscow and suspend its attendance of the Group of Eight summit in Sochi in June. Subsequently, the U.S. and EU authorities also said a second set of sanctions was being planned.

British Prime Minister David Cameron also chastised Russia on Tuesday, saying that it could lose its G8 membership because of its position on the Crimean crisis.

Echoing the tough talk of other Western leaders, U.S. Secretary of State John Kerry said he would hold talks with Russian Foreign Minister Sergei Lavrov only after Russia proved that it was ready for dialogue, a representative of the State Department said Tuesday, Interfax reported.

As the West criticized Russia's involvement in Ukraine, overthrown Ukrainian leader Yanukovych turned the tables by blaming the West and the current Ukrainian authorities for escalating tensions in Crimea.

He twice repeated that he was "still alive," apparently refuting media rumors that he had died from a heart attack.

"I would like to say that I am alive, though I cannot say I am in good health," he said.

Referring to his opponents as "dark forces," he said the current government in Kiev was fascist and chided the West for not recognizing this fact. 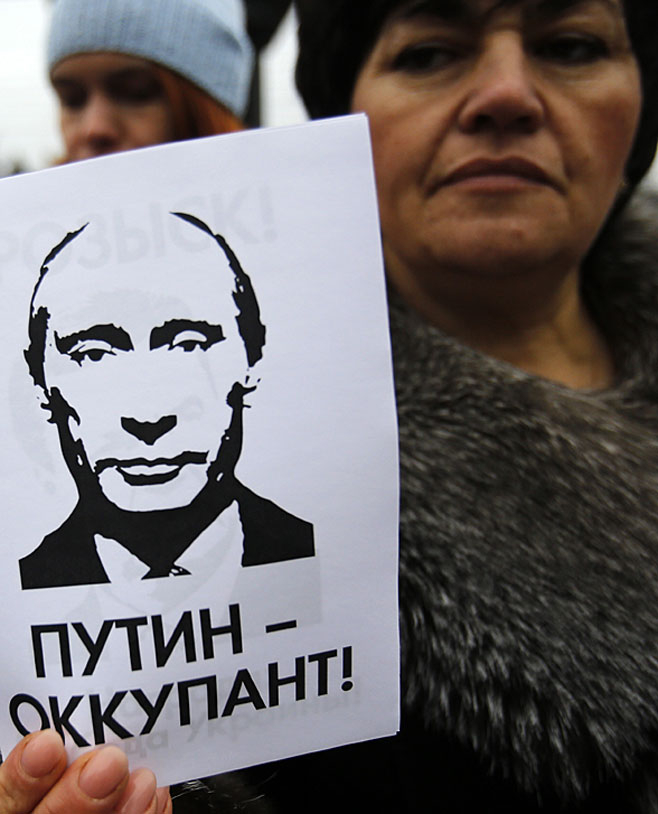 A woman holding a sign that reads, "Putin is an occupier" in Simferopol.

"Just think about it, they want to rally the armed forces under the banner of [nationalist leader Stepan] Bandera and launch a civil war," he said. "They want to include nationalist militants into the armed forces. … Behind the facade of an allegedly legitimate government, a gang of ultranationalists and neo-fascists is operating in the country."

Yanukovych blamed the current economic crisis in Ukraine on the incumbent government, saying that he "had nothing to do" with the economic problems.

He reiterated that he believed his overthrow was an unconstitutional coup, that Ukraine's presidential election set for May would be illegitimate and that federal law prohibited U.S. authorities from giving aid to illegitimately elected governments. Taking it a step further, he said he would ask the U.S. Congress and Supreme Court to address this issue.

Yanukovych's opponents are unlikely to be moved by his argument. They have maintained that his removal in February was legitimate because he was impeached by the Supreme Rada for dereliction of duty and gross human rights violations.

"He just wants to show that he is still alive," he said by phone.

Further complicating the situation in Ukraine, the Crimean parliament on Tuesday adopted a declaration of independence.

"If at the referendum scheduled for March 16, 2014, the peoples of Crimea will decide to join the Autonomous Republic of Crimea and the city of Sevastopol to Russia, Crimea shall be declared an independent and sovereign state with a republican form of government," the declaration read, highlighting the fact that Sevastopol is administratively separate from the rest of Crimea.

After becoming independent, Crimea is expected to formally join Russia, the parliament said.

The Supreme Rada of Ukraine on Tuesday urged the Crimean parliament to reconsider its position on the referendum, saying that it violated Ukraine's constitution and that it would ask the Council of Europe's Venice Commission to assess the referendum's legitimacy.

Opponents of Crimea's current authorities have argued that the referendum was illegitimate because it contradicted Ukrainian and international law. They also say the decision on the referendum was made under pressure from Russia, in violation of procedural rules, and also in violation of the 1994 Budapest Memorandum on Security Assurances, under which Russia pledged to respect Ukraine's sovereignty and borders.

Alexander Kostin, a lawyer specializing in international law at Khrenov and Partners, said by e-mail that the self-determination of nations was a subject of "heated scholarly debate" and therefore it was "almost impossible to determine the scope" of this right. However, in 2010 The Hague-based International Court of Justice issued a non-binding resolution stating that a nation's unilateral declaration of independence was consistent with international law, he said.

"Considering the approach taken by the International Court of Justice, it is safe to assume that the Crimean declaration falls within a nation's right to self-determination," he said.

Addressing the argument that the Crimean parliament's decisions could have been made under duress, he said that according to the principle of the sovereign equality of nations, no country had a right to impose its will on another one.