For months, Kiev's central Independence Square was the center of a struggle between protesters and the Ukrainian government, with Russian authorities watching the events unfold in their neighbor to the west with unease.

Over a warm Women's Day weekend, however, caricatures of President Vladimir Putin multiplied next to posters denouncing ousted Ukrainian President Viktor Yanukovych, as the crowds in central Kiev have become preoccupied with actions being taken by Russian authorities.

With soldiers believed to be Russian controlling the southern Ukrainian region of Crimea, Kiev residents chatted eagerly about relations with Russia on a weekend that, for protesters, began with a picket of the Russian Embassy in Kiev on Friday.

"Putin is a devil" said Viktor, a middle-aged cab driver who did not give his last name. "But people in Moscow are quiet, aren't they?"

A prominent Russian visitor to Kiev — Putin critic and formerly jailed oil tycoon Mikhail Khodorkovsky — received a warm welcome, however. Khodorkovsky arrived at the Euromaidan protest camp and held back tears when speaking to crowds on Sunday as part of a lineup of speakers who marked the 200th anniversary of the birth of Ukrainian-language author Taras Shevchenko.

Khodorkovsky's speech focused less on poetry and more on Russia, which he said was complicit in violence against demonstrators in Ukraine during protests that followed Yanukovych's rejection of an association agreement with the European Union. As the crowd chanted "Thank you" and "Russia stand up," Khodorkovsky said: "This is not my power. I want you to know that there is a completely other Russia."

The former oligarch also gave a lecture to a packed hall at Kiev Polytechnic Institute on Monday, in which he repeatedly called for Russian-Ukrainian friendship, something that he said could be at risk given the tensions in Crimea. Following the speech he took questions from students in a rowdy audience that saw one unidentified man climb up to the speaker's podium and attempt to hand Khodorkovsky a small red book before being escorted offstage. 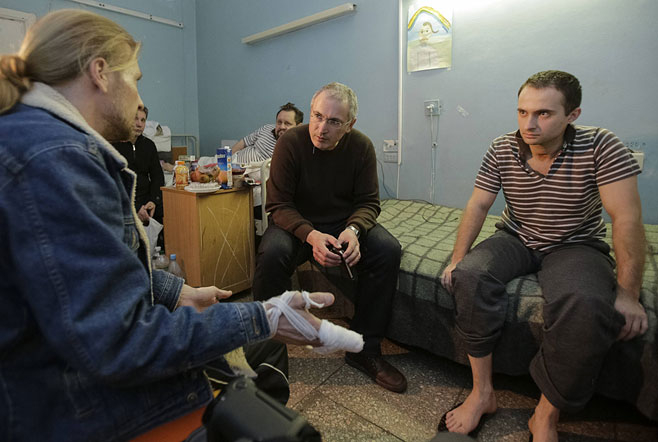 Khodorkovsky urged dialogue between Russian and Ukrainian speakers, saying that Ukrainian citizens should all speak two languages, as people in Switzerland do. The diplomatic tact did not resonate with all the students and other people in the crowd, which shouted out questions asking for more specific opinions on Crimea's Tatar Muslim minority and Ukrainian fascists. Khodorkovsky said that fascists — whom Russian authorities have cited as posing a particularly dangerous threat to stability in Ukraine following the ouster of Yanukovych — were no more populous on Maidan than in Moscow or St. Petersburg.

Sasha Kirichenko, 21, a lightly bearded student of information technology who attended rallies on Maidan, said he disagreed with Khodorkovsky about the impact of the far right on the protests but added that he is "a positive figure in the eyes of Ukrainians because the majority of Ukrainians hate Putin."

Talia Kiraska, an 18-year-old physics student, said about Khodorkovsky: "He is not the most honest person they have in Russia, but nevertheless everyone who is a political prisoner in their country is always considered more pure in our country."

Despite the animosity expressed toward the Russian government, some in downtown Kiev described a feeling of solidarity between Russians and Ukrainians.

"My mother is a Russian citizen. My father is a citizen of Finland. I see us Slavs, we are all brothers," said Alexander, a part-time street musician who sells souvenir magnets near Maidan. He held up one magnet with a Ukrainian flag and the words "United Country" in Ukrainian and Russian.

While many Kiev residents are opposed to the presence of pro-Russian troops in Crimea, they are divided as to the future of a region that has seen increasing separatist tensions and will hold a referendum on joining Russia next week.

Kirichenko, the IT student, said "everything would be fine" without the southern peninsula as part of Ukraine. Viktoria, a waitress in a pub next to Maidan said, "I do not understand people who live in Ukraine and say I also support the Russians. If you want to be in Russia just go there and live there."

Alexander, the souvenir salesman, said he held high hopes for the future of Ukraine: "We are growing up. We are ready to be a nation. We do not want a war. We do not want anything like that."