SOCHI — With the Winter Olympic Games under way in Sochi, sports have taken over the city completely, and even the Fine Arts Museum is hosting exhibitions dedicated to athletics.

But not everyone is happy about what impact the Games have had on the city.

"I am against the Olympics in our city," said Irina Prokhorenko, the museum's administrator.

"On the one hand, Sochi has got a new transportation system and has become more beautiful and clean. But in reality only the city center is clean, and beyond that, garbage is not even being collected."

The main problem, she said, is that prices of food, transportation, housing and utilities have skyrocketed because of the Olympics and continue to grow even now. 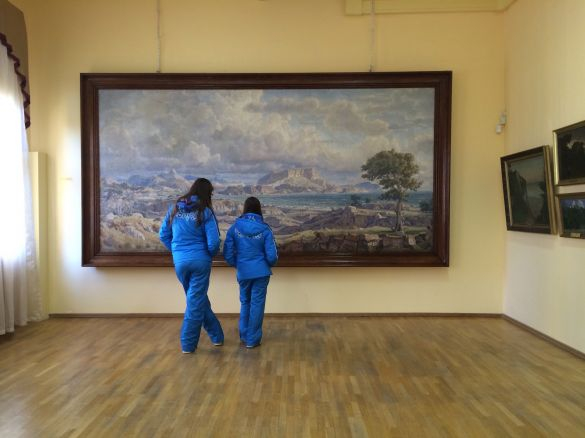 Olympic volunteers studying one of the works on display at the museum.

"It is not right to fund the Olympics by means of ordinary people; most Sochi residents are not that well-off," she said.

However, she also said there had been some improvements in the museum — where she has been working for the last 20 years — with a number of repair works completed there recently and special equipment for athletes coming to Sochi for the Paralympic games set up.

The museum has a small permanent collection, consisting mostly of works by local artists from the 19th and 20th century. It also has two works by famous Russian marine artist Ivan Aivazovsky and a work by landscape painter Ivan Shishkin.

Prokhorenko, a Sochi-native, said while everyone liked Aivazovsky, she preferred local Sochi artists. 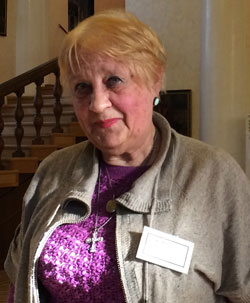 An exhibition telling the story of what role sports played in the lives of the Romanov family was organized especially for the Olympics. Nineteenth-century tennis rackets, bicycles and sports uniforms previously owned by the Russian Imperial family are currently on display there.

In the run-up to the games, officials from the local culture committee and the Culture Ministry visited the museum frequently, but officials do not really care about culture in the city, Prokhorenko said.

"Our new mayor, Anatoly Pakhomov, has never been to our museum," she said.

No additional funds were allocated for the museum's future development, according to Prokhorenko, and the museum can afford to have only one person to restore paintings, even though the number of works that require restoration is significant.

The entire museum staff, which consists mostly of older people, receive low salaries, she said, while the restoration master has to buy brushes, oils and other instruments with her own money. She added that most of the artists in the city also lived in poor conditions.

During the Olympics, entrance to the museum is free of charge, Prokhorenko said, and this has had a negative impact on its functioning.

"We have no money for office materials and cleaning products; I believe people coming to the Olympics can afford to pay at least 50 rubles to enter," she said.

"But we have to follow the authorities' orders and work without days off as well. I am not even sure we will be paid for that," she said.

Renewed fighting near the Zaporizhzhia plant has raised fears of a nuclear disaster.
one man's truth

The pro-Kremlin actor was shown around Russian-occupied eastern Ukraine and the site of a strike that killed Ukrainian prisoners.