SOCHI - Friday's opening ceremony of the Winter Olympics marked a particularly special occasion for Sochi residents, who have spent the past 6 1/2 years experiencing the excitement and upheaval of preparations for the Games. But not everyone in the city was able to celebrate the evening as they had hoped.

Thousands of Sochi residents and visitors came Friday night to a venue in the city center to watch a broadcast of the ceremony, but security was tight and many people could not get in. Only three metal detectors stood at the entrance and a bottleneck formed, pushing people into a tight crowd.

"It's hot like in summer, so they've chosen the right slogan for the Olympics," a young man said, referring to the official Sochi 2014 slogan: "Hot. Cool. Yours."

Some people had Russian flags with them and some had the Russian flag painted on their cheeks. But shouts of "Go Russia" were addressed not so much to Russian athletes but to the security guards who worked slowly to help people enter the venue.

The procession did not go without a fight in the crowd. People had to stand so close to each other that one man thought another man standing near his wife had tried to harass her. He attacked the man and police had to intervene to stop the fight. 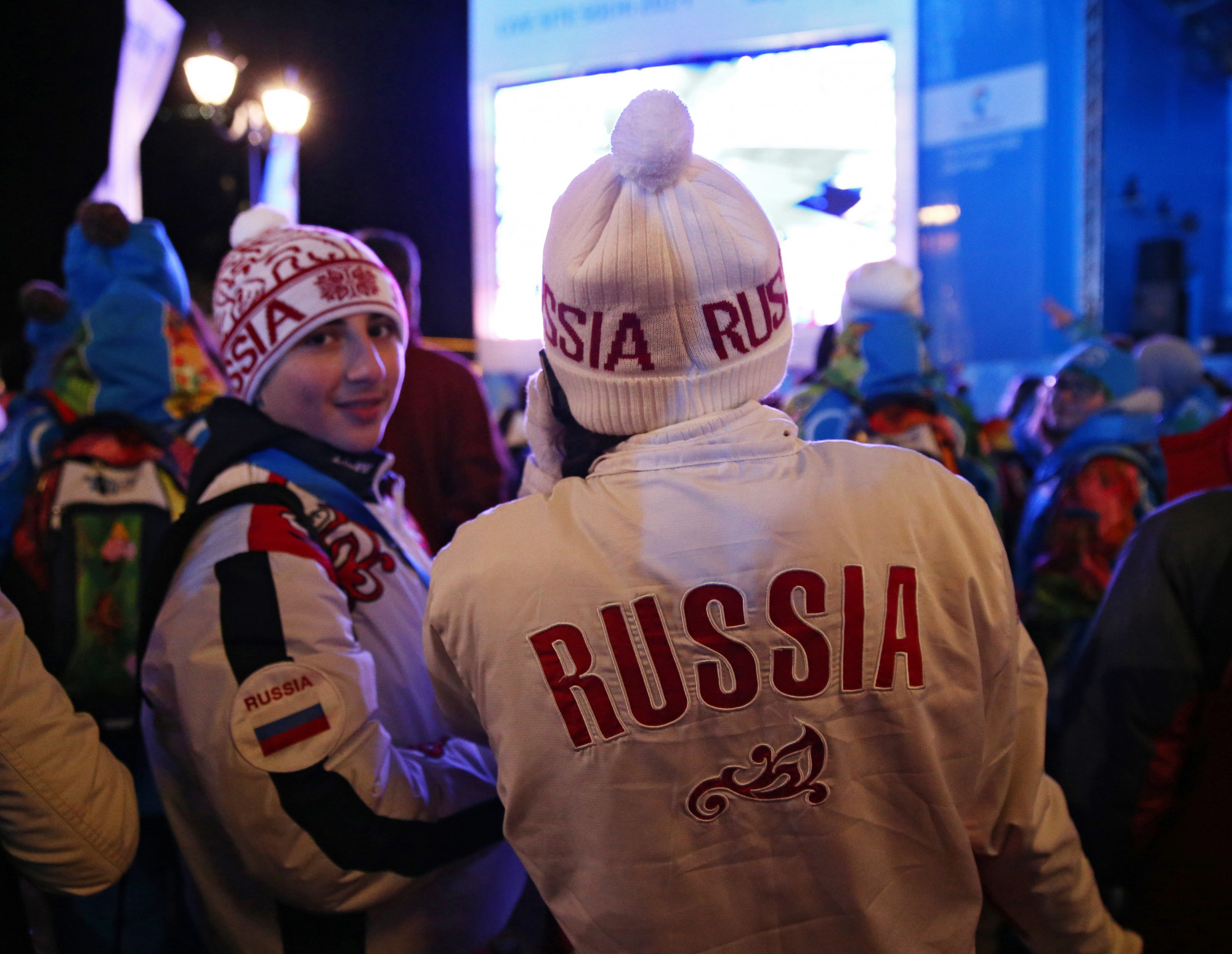 Once inside, the mood was little improved. After standing for more than 40 minutes to get in, one could see that the venue was mostly empty and that those in attendance were not thrilled with the setup.

"I expected there would be free Russian flags distributed here, but you have to pay for everything," said Nikita Anufriyev, an unemployed 24-year old Sochi resident. "And what excitement could I feel after all the Sochi residents had to go through during these years of construction? We are breathing construction dust here and so many people have been ousted from their homes due to the need for land for Olympic construction."

His friend, 26-year old Yevgeny Kuznetsov, said that he worked as a technical specialist at Fisht Olympic Stadium, where the ceremony was taking place, but that he was not able to attend since not all the employees were given tickets.

"I came here because I thought the organization would be better, but it is horrible," Kuznetsov said. He added that he was not satisfied with his work at Fisht stadium, but he declined to elaborate.

At the nearby Bankir cafe, the atmosphere was more festive, with people watching the ceremony with glasses of beer. They shouted "hoorah" and "Russia" after the Russian national anthem was sung and applauded loudly when the Russian Olympic team appeared on the screen.

When President Vladimir Putin was shown, a voice in the cafe shouted: "Let's go, Volodya!"

After the Olympic flame was lit, the atmosphere elsewhere in the city also seemed to change. Whistles and shouts of "Russia" and "Sochi" rang out, and people interviewed while leaving the outdoor broadcast site were energized, saying they were fully satisfied with the ceremony and proud of Russia. 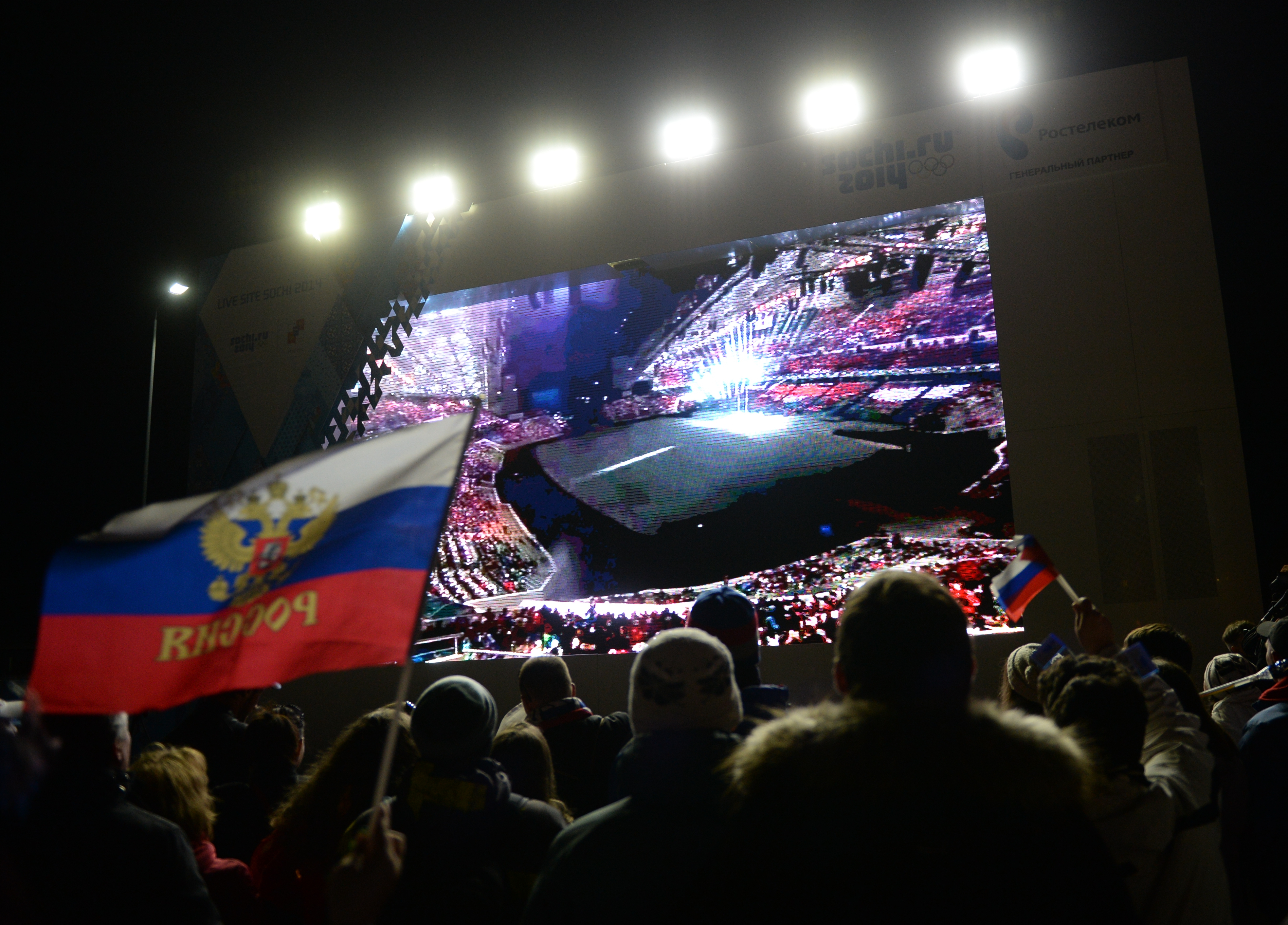 Thousands of Sochi residents followed the ceremony from a big screen in the center of the city. ( Pavel Lisitsin / Ria Novosti)

"Finally it has happened," said Irina Zuyeva, 30, a Sochi resident and a police officer who was not on duty on Friday night.

"It was very impressive and inspiring. We liked absolutely everything about the ceremony and hope our athletes will get lots of medals," said her husband, Svyatoslav, 32, also a police officer.

Alina, 52, an engineer who came to Sochi from Pyatigorsk, a city in the nearby Stavropol region, to support the Russian athletes, shared the Zuyevs' sentiments.

"I have never seen anything like that before," she said. "It exceeded all my expectations. I am so proud of my country."