SOCHI – President Vladimir Putin declared the 2014 Sochi Olympics officially open on Friday night after a grandiose 2 1/2-hour show that told the history of modern Russia with dazzling lights, giant installations and hundreds of dancers, in an event that marked the end of more than six years of fevered preparations by the Russian government.

In the midst of an economic downturn and largely negative international media attention on Russia, the Olympics were envisioned by the Kremlin as a demonstration to the world of the country’s transformation into an advanced nation.

The opening ceremony, viewed by tens of thousands of spectators in Fisht Olympic Stadium and millions more around the world, showed that transformation in song and dance numbers that featured enormous inflatable samovars, a ballet scene from Leo Tolstoy’s iconic “War and Peace,” machines illustrating the start of the Soviet era, and cosmonauts and hipster dancers from the hopeful period after the death of Josef Stalin. Classical music by famed Russian composers from Tchaikovsky to Stravinsky provided the soundtrack.

Viewers were on the alert for political symbolism in the proceedings. Social media users noted the fact that World War II, a watershed moment in Russian history, was not depicted in detail, and some saw significance in the playing of a mash-up song by faux-lesbian duo t.A.T.u. and the band Queen, whose lead singer was gay, when the Russian Olympians filed into the stadium, arguing that it could be a pro-gay gesture amid international criticism of Russia’s anti-gay propaganda law.

Many found fault with the choice of one of the final Olympic torch bearers, Irina Rodnina, a former Olympic figure skating champion and current State Duma Deputy, who jogged with Soviet hockey legend Vladislav Tretyak to light the main torch and conclude the ceremony. Rodnina became embroiled in scandal last year when she tweeted an allegedly racist photo of U.S. President Barack Obama and his wife Michelle with a banana.

The appearance of former Olympic champion gymnast Alina Kabayeva, who has been widely rumored to be Putin’s lover, as a torch bearer provoked shock among Internet commentators.

But many quickly declared the ceremony a booming success — even prominent detractors of the Olympic project, such as opposition leader Alexei Navalny, who has accused the government of wasting billions of dollars to host the Games.

“Well I don’t know. I like everything. And the music too,” Navalny tweeted.

The only major glitch noticed in the ceremony came when one of five snowflakes that appeared above the central field did not transform with the other snowflakes into the Olympic Rings. On the television broadcast, footage from one of the rehearsals was used to cover the mistake.

Putin played a minor role in the ceremony compared to his oversized part in bringing the Olympics to Russia. His arrival to a seat next to International Olympic Committee head Thomas Bach was shown at the start of the event, and he appeared to be nervous, fidgeting with his hands. His only participation in the ceremony was later to declare the Games officially open.

Seated nearby the president was Prime Minister Dmitry Medvedev, who was caught by television cameras apparently dozing off, to the great amusement of online commentators.

The opening was also attended by more than 40 heads of state and international delegations, although Obama and some European leaders skipped the event, in some cases citing Russia’s human and LGBT rights record as the reason for their absence. Chinese President Xi Jinping, Japanese Prime Minister Shinzo Abe and embattled Ukrainian President Viktor Yanukovych were among those on hand for Friday’s ceremony.

Speaking to a reporter afterwards, attendees gave largely positive reviews of the event. Timofei Krasnoshtan, who has been involved in organizing the Games, said the ceremony was like a rock concert.

"The drive and the energy was immense," he said.

Kseniya Ponomaryova, a Sochi resident who also attended, called the show captivating. "I came with my two-year-old child and he did not cry and could not fall asleep right until the lighting of the flame," she said. 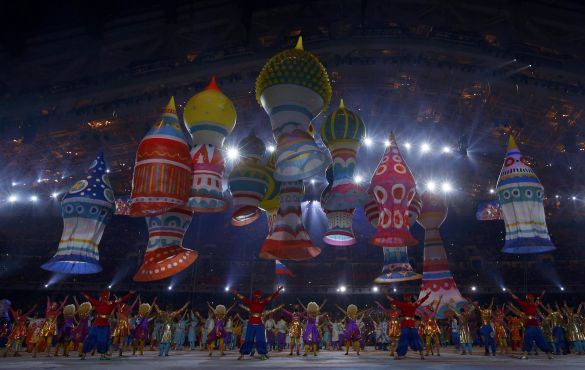 Dancers performing during the opening ceremony of the 2014 Sochi Winter Games in Fisht Stadium on Friday.

The ceremony kicked off what both critics and government supporters have described as a pivotal moment in Russia’s post-Soviet history, with critics predicting that economic problems and a tightening of the political screws will follow and Kremlin supporters viewing Russia’s hosting of the Olympics as a sign of Russia’s economic and political resurgence on the world arena.

Russian opposition leaders have said the Games cost more than $50 billion and that much of that money was siphoned off in acts of theft and corruption. Government officials, led by Deputy Prime Minister Dmitry Kozak, have dismissed that claim, saying the state spent only $3 billion on Olympic venues, with the rest invested in Sochi’s overall infrastructure.

The ceremony definitely marked a turning point for Sochi residents, whose everyday lives have been dominated by Olympic preparations for the last 6 1/2 years. Over this period, the city has been transformed by numerous new high-rise apartment buildings and hotels, as well as roads and other infrastructure.

Locals and visitors poured into sunny and warm central Sochi on Friday afternoon, cheering and enjoying the last few hours of the pre-Olympic period, some with sighs of relief and some with glee and joy. Increased security measures were enforced with a police officer always in sight and manhole covers glued with special protective plastic to prevent a bomb from being placed in the sewage system.

Dozens of motorcades with top government officials, foreign dignitaries and IOC members cruised down Kurortny Prospekt, Sochi’s main thoroughfare, over the course of the day. Two hours before the event, the street was closed for regular drivers to let a long motorcade of buses and cars drive toward Adler, the district of Sochi where the majority of Olympic facilities are located.

But then the city suddenly became quiet, as though mesmerized with anticipation, with only birds breaking the silence. Shortly before the ceremony began, cars rushed from the clogged streets around Kurortny Prospekt, hurriedly trying to reach their destinations. The ceremony started at 8:14 p.m., or 20:14 in military time, matching the year of the Games.

Those without a coveted ticket to the ceremony had the option of watching it on screens at a venue in central Sochi, although problems at the entrance due to tight security ruined the experience for some. Only three metal detectors were installed, creating a bottleneck as thousands of people attempted to make their way in.

"This is horrible," many people in the crowd could be heard saying, along with complaints that the security had spoiled the celebration for them. Some said they regretted that they hadn’t stayed home to watch the ceremony on television, and some abandoned the line.

“I’m not sure if my clothes have been torn, but I will definitely not be able to wear my shoes again after that," said Nikita Anufriyev, a 24-year-old Sochi resident.

"I don’t know what to expect from the opening ceremony after this, but this is Russia, nothing is made for people here," he said. 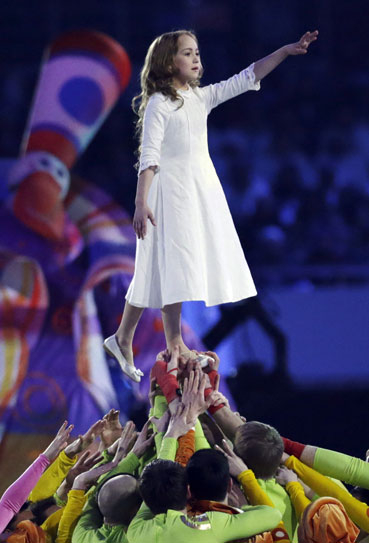 Artists surrounding Lyubov, the star of the ceremony’s opening spectacle.

The ceremony marked the first public use of Fisht Olympic Stadium, which was built specially for the Games and experienced chronic delays, having to be redesigned at the last minute with a temporary roof and two additional pavilions added.

The roof was a key element of the ceremony, with numerous ceiling racks carrying heavy decorations, such as a gargantuan locomotive that apparently represented the boisterous movement of Russian history at the beginning of the 20th century, from one pavilion to the other.

The ceremony was produced by Konstantin Ernst, head of state-owned Channel One television and one of Russia’s most prominent media executives, who acknowledged the importance of the event. “We realized that the opening ceremony carries the name of the country,” he said at a news conference on Friday afternoon. “This is why, as the main motif for the ceremony, we selected our message on behalf of the country, how we see the country, what Russia is all about.”

Judging by the content and style of the ceremony, the message was to emphasize Russia’s conservative values while reminding the world of the country’s famed cultural heritage and hinting at its technological inventiveness.

An opening video montage took viewers through the Russian alphabet, listing the names of significant Russian artists (Kandinsky, Malevich, Chagall), writers (Pushkin, Tolstoy, Chekhov), technology (the periodic table, sputnik) and more. Various parts of the vast Russian landscape, from a wooden village to a Kamchatka volcano, were then depicted in the stadium, with a young actress floating above them.

The athletes from each country filed in from a ramp in the center of the stadium near the beginning of the ceremony, after which animatronic versions of the Olympic mascots—a bear, rabbit and leopard—glided in, waving and bowing to spectators. Following that came the historical episodes, which skipped over huge periods, including most of the 19th century and the fall of the Soviet Union.

Sochi Organizing Committee head Dmitry Chernyshenko welcomed the crowd with a speech on a stage shaped like Russia.

“Our city [Sochi] is unique, just as Russia is, the biggest country in the world … a country of great accomplishments,” Chernyshenko said in Russian. “We are proud to host the Olympic Games.”

“The Games in Sochi is our chance to show the whole world the best Russia has to offer,” he said, proceeding to make other comments in both English and French. IOC head Bach then spoke, thanking organizers and congratulating the athletes, and Putin followed him, declaring the Games open. The Olympic anthem was sung by Anna Netrebko, Russia’s famous opera diva who is also a native of Krasnodar, near Sochi.

The event concluded with the Olympic flame being run into the stadium by Russian tennis star Maria Sharapova, who passed the torch to pole vaulter and former Olympic champion Yelena Isinbayeva. Other torch bearers included wrestler Alexander Karelin and Kabayeva.

Soviet-era Olympians Rodnina and Tretyak took the flame its final few dozen meters to a spot just outside the stadium, where they lit a gas jet that carried the flame to the top of the main torch, after which celebratory fireworks exploded across the sky above the Black Sea.