On Thursday, the ruble-­dollar exchange rate was at 35.4, while the buying rate of the euro was 48.2 rubles. That means the ruble has dropped almost 8 percent against the dollar and lost just more than 6 percent against the euro since the start of the year. Over the past 12 months, the picture is even worse, with the ruble having lost 16 percent against the dollar and 20 percent against the euro. The current ruble-euro rate represents a new record low for the Russian currency against that of its main trading partner, the eurozone. That means the cost of imported consumer goods will rise further, thus boosting the inflation rate. Russian tourists can expect to pay a lot more for foreign holidays this year, while expatriates will find their ruble-denominated salaries will not go as far in their home countries.

The old formula of a strong oil plus positive growth equaling strong ruble is not working.

In February 2009, when the ruble posted its record low of 36.7 against the dollar and recorded its previous record low of 47.25 against the euro, the price of Urals crude had collapsed from the record high of near $140 per barrel, set in June 2008, to only $40 per barrel. During the 2009 recession, gross domestic product declined by 7.8 percent and the Central Bank burned through more than one-third of the country's foreign exchange reserves. Today the price of Urals crude is at $105 per barrel, a level it has been close to for most of the past three years. While economic growth has been disappointing, the trend is still positive.

So, what is going on?

The old formula of a strong oil plus positive growth equaling strong ruble is not working. There is clearly a new dynamic at work. For companies needing to pay for imported goods and services and individuals with savings, the critical question is: "Is it too late to panic, or might we see a further steep fall in the value of the ruble?"

I started this year with a forecast that the ruble would slowly slide ahead of the Central Bank's plan for a fully free-floating ruble in early 2015. I set an end-year forecast of 36 for the ruble against the dollar. I certainly did not expect to see that target almost reached over the first month.

Looking purely at the economics, the worst of the slide should nearly be over. The problem is that fear of further weakness coupled with external contagion may, regardless of the economics, cause a steeper slide than warranted in the short-term. The immediate short-term risk factor is external contagion and whether the rising concerns over a full blown crisis in emerging markets will continue to spook investors into cutting exposure to all assets in that category. So while the current downward spiral across most emerging markets currencies may force a new record low for the ruble-dollar rate and pull the ruble-euro rate toward 50, I believe it is too late to start switching out of the ruble. The economics do not justify it, and the Central Bank has enough firepower to stabilize the situation once the rest of the world settles down. That unpredictable latter bit is the risk, of course. 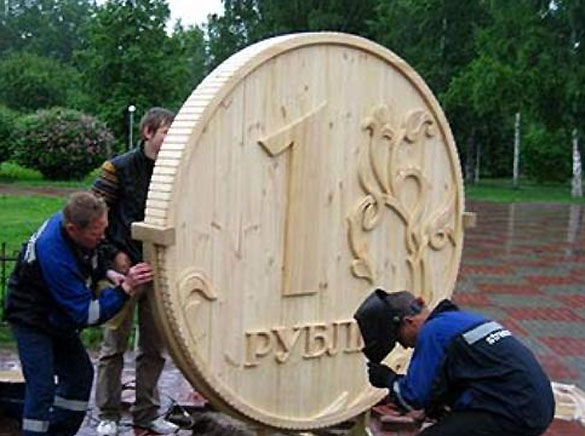 When trying to understand the reasons for the weakness in the ruble, it is useful to take a step back and look at the context. The downward spiral in the value of emerging market currencies started last summer when the chairman of the U.S. Federal Reserve first muted the probability of unwinding the quantitative easing. or QE, program. That news led to the specific concern that capital would start to flow out of emerging economies and back into dollar assets. The presumption being that a significant amount of the QE cash made available by the Federal Reserve since 2009 had found its way into these economies. The Federal Reserve's latest decision to accelerate QE unwinding, which was made at Ben Bernanke's last meeting as chairman on Wednesday, is the reason why the ruble and other emerging market currencies fell further yesterday. Over the past 12 months, as the ruble lost 16 percent against the dollar, Brazil's currency has fallen 21 percent, South African's rand is down 23 percent and Turkey's lira fell 32 percent before its central bank intervened aggressively with a near doubling of interest rates earlier this week. All of this looks relatively good compared to the more than 60 percent hammering suffered by Argentina's peso.

The problem is that the ruble should not be in the same at-risk category as the currencies of Brazil, South Africa, Turkey, Argentina and many other big emerging economies. In contrast to those countries that are running sizeable current account and budget deficits, Russia has a current account surplus, and last year's budget deficit was less than 0.5 percent of GDP. To a large extent, it is a case of throwing out the baby with the bathwater. When calmer conditions prevail, the safer balance sheet currencies should stabilize or recover some of the recent losses.

So contagion is only part of the story, of course. Part of the explanation for why the stronger balance sheet has not protected the ruble is because of the actions of the Central Bank itself. Though 2013, the bank was actively intervening in the foreign exchange market in support of the ruble so that it would not fall as much as peers in other emerging markets.

But as the focus of greater concern has shifted to the weakening growth indictors in the economy in recent months, the Central Bank started to inject ruble liquidity to boost the banking sector. This was an attempt to cut customer lending rates and to ensure there are no liquidity issues in the banking system as the Central Bank accelerates the program of closing more small banks. Up to 400 licenses may be withdrawn, a long-held government objective, over the next 12 to18 months. But that daily routine has contributed to ruble weakness. As it continues, the expectation that there will be more weakness to come has grown among traders, thus exacerbating the situation. Many economists have recently started to highlight this combination as a major cause for ruble weakness and have called on the Central Bank to cease or change its interventions policy. That would at least ease one of the factors forcing the ruble lower.

While external contagion is the major short-term risk and the major unknown at this point, the more fundamental problem for Russia continues to be the slowing economic performance and the concern that a further weak result in 2014 would start to unravel the positive financial indicators. For example, Russia's current account surplus was $33 billion last year, of which only $5.3 billion was reported in the second half-year. There is a real fear that we may see a deficit in the 2nd or 3rd quarter this year  —  something Russia has not seen since the 1998 default. In that case, the ruble will face further downward pressure.

Despite the deteriorating current account, Russia, unlike many emerging market peers, faces no major debt or financing issues. And given the outlook for crude oil over the next 12 months, none should arise. There is also an optimistic side to the ruble weakness: It may force greater import substitution as consumers switch to cheaper domestic alternatives. The cheap ruble should also provide a competitive boost to the country's admittedly small export manufacturers. It is here that those who believe in silver linings wrapped around dark clouds will be looking.