Sochi may be a great place to holiday as a couple, but for children it is purely heaven. There are more amusement rides, aquariums and ice-cream lots than you can count, not to mention the sea, which will not leave any youngster disappointed. Children tend to depart from Sochi as the Soviet resort complex expected them to — tanned, fit, rested and well-versed in local history and botanical life. Some of the ways to achieve a similar outcome in the 21st century are described below. 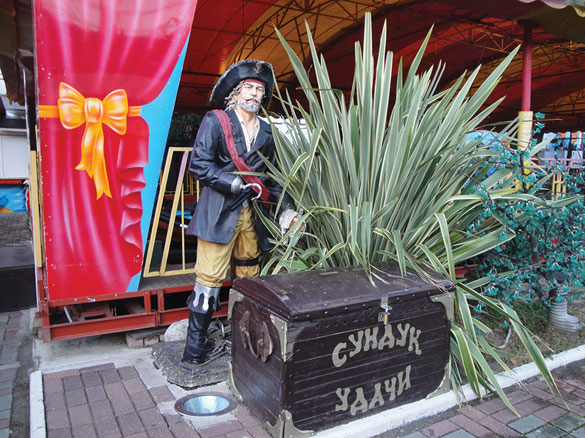 The Riviera Park is a one-stop destination for many of the children's activities that Sochi has to offer. There is little chance that, among all the amusement rides, gardens and the oceanarium, anyone in your family will leave without finding something they like. There is even a beach adjacent to the park in case the kids cry out for sea water.

The park is not just a place where the children's tour of Sochi can start off with a bang. Some argue that it could also be considered the birthplace of Sochi as a resort. That moment dates back to 1898 when a famous entrepreneur Vasily Khludov built his dacha in the area and founded a park around it. Khludov did not get to enjoy the park for too long as he sold it to the city a few years later, but now he is a constant presence, albeit as a monument, that you can find near the entrance. His fancy dacha also still stands in the middle of the park, spectacular in its sunny yellow tones.

Different amusement rides and attractions were set up in the park over the years, and now there are more than 56 of them, satisfying all ages and fantasies. You can hop from trains to boats, play air hockey and try to win a plush toy at one of the numerous shooting ranges, all while being cheered on by the upbeat Soviet children's tunes.

For the curious, the Riviera Park offers a butterfly museum and an oceanarium. The oceanarium, located in the heart of the park along one of its busiest walkways, is worthy of a separate note. Fish are brought here from around the world. You will see menacing sharks and mysterious moray eels as well as venomous red lionfish, which release poison when touched. There is no antidote for their poison in Sochi so they would be unpleasant companions if you ever met them outside their tank.

The Friendship Meadow is another great place to visit.

A tradition was started in 1960 for notable city guests to plant magnolia trees here. In most cases notability equated to being a cosmonaut, so this meadow could just as fittingly be given some grand galactic title. There are 45 trees planted here by Russian and American space legends, including German Titov, Valentina Tereshkova, Aleksei Leonov, Vitaly Sevostyanov, Thomas Stafford and Deke Sleyton.

While here, take a look at the small artificial pond with the swan sculpture in the middle and test your kids on their geographical knowledge. If the shape of the pond looks vaguely familiar, that's because it was designed to represent the Black Sea in miniature.

There are multiple water parks across the Sochi coast but, in terms of location, Mayak just cannot be beat. It is easily found on the bustling Sochi promenade, just a short walk from the seaport, and as a bonus leads out directly to the sea. The water park has its own beach where parents can seek refuge while children create havoc on the waterslides. The beach is equipped with all the essentials, such as lounges and umbrellas, and also offers rental services for scooters and water bikes.

But as relaxing as the private beach is, Mayak is still best known for its waterslides. There are seven of them in total, ranging in terms of thrill factor. To keep things simple, just remember that the Kamikaze slide is for the hopelessly fearless and should be approached with caution. Meanwhile, the youngest visitors can calmly paddle to the magical pirate ship or splash around in "Dyetsky Gorodok," a miniature city set in a heated pool.

Wrap up your visit to Mayak with a slow turn around the lazy river atop an inflatable raft. Make sure to climb out of the pool fashionably and order something to cool off at one of the cafes that are located on the premises.

The Riviera Park can be an overwhelming experience considering how many families flock there every day. Fortunately, Luna Park offers a soothing alternative without compromising on the quality of the fun activities it offers. The year-round amusement park has fewer rides than Riviera, but all the standard offerings are here, including a children's railroad, bumper cars and trampoline, brought together in a compact and cozy setting.

You can walk directly through Luna Park coming up from the sea promenade or vice versa. This short tour is bound to make kids happy but will not take as much time as you are likely to spend exploring the many nooks and crannies at Riviera. 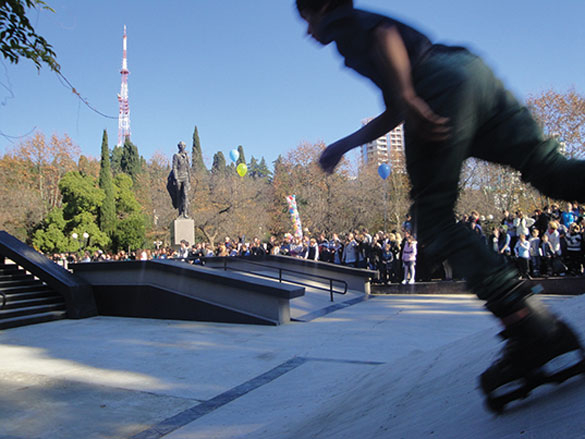 Boardak is one of the newest additions to Sochi's transformation for the Olympics. The city's youth used to come to this small section of Park Kultury to practice skateboarding and BMX tricks in an old fun-box. But this platform quickly got too small — and elementary — for the skilled amateurs. They got their Christmas wish a month early, at the end of November 2013, when a full skate park was officially opened in the same location. Boardak has quarter pipes, stairs, rails and ramps, among other features, and enthusiasts can be seen practicing here at all times, seemingly oblivious to whether it is light or dark outside.

West of the skate park, you will see the former site of Stereo cinema, now headquarters for the state corporation Olympstroy, which was tasked with building and reconstructing infrastructure for the Olympic and Paralympic Games. This columned building was constructed in the 1950s as a gift to the city from then-General Secretary Josef Stalin.

If you walk to the Olympstroy headquarters, you will see a curious sculpture to one of Sochi's most respected social classes: the tourists. This depiction of a standard tourist is somewhat unflattering, but arguably realistic. The male, pudgy figure is clad in flip-flops, belted with a fanny pack and has a photo camera dangling around his neck. An almost exact copy of this statue can be seen in the lobby of the pop-star favorite Zhemchuzhina hotel, which another route will take you to, except this tourist has a bigger wallet and a better camera. 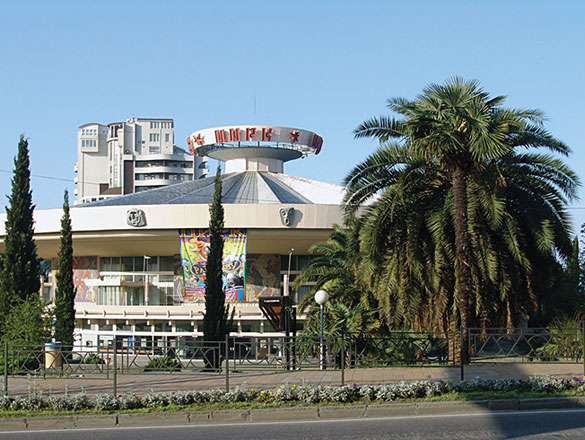 The circular dome of the Sochi State Circus is one of the best recognized sights of the city, but it is still preferable to be sitting on one of the 2,000 seats inside when a show is on. And what a show it promises to be! The circus has welcomed some of the best Russian and foreign performers since the beloved Soviet clown and actor Yuri Nikulin laid the first blocks for its foundation in the 1970s. The hall has also been used to showcase the works from the Kinotavr film festival and host the long-running humor competition KVN.

Sochi residents are proud of this venue and are defensive about any plans to change it. Officials once proposed transforming the site into a year-round, 24-hour entertainment complex in which the dome would be covered up by a metal fixture and the territory in front of the building would become a pool. There was also supposed to be a hotel, concert hall, spa center and restaurants, but the project faced strong public opposition and was never carried out. Architects were among those who deemed the reconstruction plans a threat to the building's historical facets.

The Sochi Aquarium holds the biggest collection of fish and mammals on the Black Sea Coast. There are foreign guests from Africa, including the hippopotamus and Nile crocodile, and some from South America, such as the Humboldt penguins, pythons, piranhas, arapaimas and spectacled caiman. You can also catch a glimpse of sharks, otters, seals, iguanas and sea urchins here. The aquarium offers shows during feeding times, which are spread throughout the day for different species so there is a good chance you will get to see at least one of them.

A walrus called Gavryusha cheerfully welcomes guests at the aquarium but secretly hopes to get a pat or a present for his efforts. Gavryusha is particularly fond of festive hats, so keep that in mind when you pay him a visit.