Sochi has traditionally been a draw not only for tourists from the Russian north who pined to see palm trees and bathe in salt water, but also artists who came here to entertain them or soak up some sunshine themselves. Some of these artists went on to settle in Sochi and write their best works here. The luckier ones, such as party favorites writer Nikolai Ostrovsky and opera singer Valeria Barsova, received local housing as a gift. Other artists might not have had the same fortune, but stayed in the area anyway and probably did not regret their decision.

Actors and singers who came to Sochi performed at some of the country's best venues in front of welcoming and adoring audiences. Writers and painters could easily find inspiration in the local lifestyles and exotic scenery. Admittedly, there were a few mishaps when artists would lose their voices because of the coast's high humidity, but overall the southern resort was a destination that few would be dramatic enough to turn down. 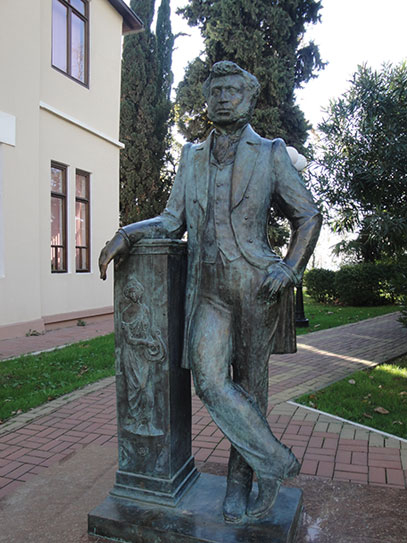 The small Pushkin Library may seem cramped and insignificant at first glance, but in reality it is a fantastic symbol of how devoted the locals are to the arts.

It was the first public library to be built in Sochi. And what is even more impressive, the library was built on public donations. Nowadays, it might appear that the locals would have had other priorities in 1912 when construction ended. After all, revolutionary activity had already started its course, the prime minister had been assassinated a year prior, and a European war was looming. Despite these less-than-perfect conditions, people eagerly responded to the local intelligentsia's call for donations. Workers, peasants and people from all walks of life contributed a total of 8,376 rubles to the project, and the best Sochi architect designed the building for no charge.

The library was immediately named in honor of the great Russian poet Alexander Pushkin, fatally wounded when he was 37 years old in a duel with a French officer who was trying to seduce the poet's wife. 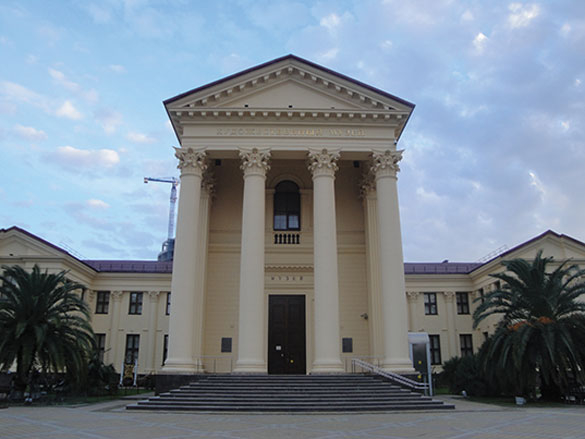 The Sochi Art Museum is the perfect place from which to start your acquaintance with legendary as well as modern Russian artists. Its collection originally consisted of artworks that hung in Soviet sanatoria, but over the years the museum has gathered more than 5,054 items in a variety of genres. Here you will find antique silver, weapons, ancient icons, traditional crafts and art from the 19th to the 21st centuries. Among the many paintings are gems by the renowned Ivan Aivazovsky, Ivan Shishkin, Vasily Polenov, Valentin Serov and Boris Kustodiyev.

The museum also hosts 25 to 30 visiting exhibitions every year from Russian cities and Europe where you can examine modern-day talent.

Do not rush to leave the area when you have looked at the exhibits, but take a short tour of the Art Square on which the museum is located. This was the traditional gathering place for city events during Soviet times, as the statue of communist leader Vladimir Lenin would suggest, and it preserves its coveted status to this day.

The museum's building itself has an interesting history. It was built in 1936 as an administration building for the All-Russian Central Executive Committee, the highest legislative and administrative body of the Russian Soviet Federative Socialist Republic from the Civil War until 1937. It was later the headquarters for the city's committee of the Soviet Union's Communist Party and was turned into a museum only in 1988.

Around the museum you will see several statues of strange objects, including pumpkins, nonhuman tourists and lizards. The statues are made from water pipes. One of the most creative ones is of the Bremen Town Musicians, which is found near the museum's fountain.

Hall of Organ and Chamber Music 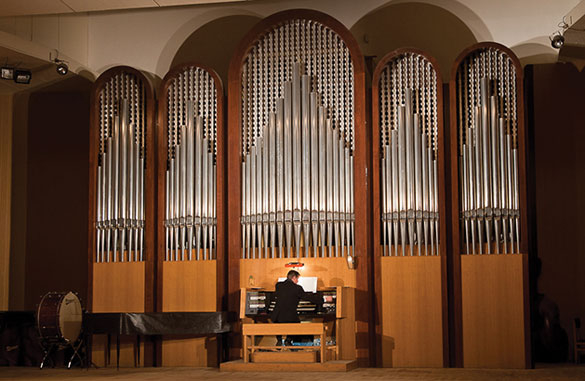 Sochi music lovers got their first pipe organ, the Czech Rieger-Kloss, in 1985. It was installed in a children's musical school where the stage was reconstructed and the interiors altered in an effort to improve the acoustics. So many tourists and locals wanted to hear the organ played that the government decided to build a specialized organ hall a few years later.

Now the Hall of Organ and Chamber Music hosts concerts by Russian and foreign artists, cultural evenings and festivals. Some of its biggest hosting duties include the International Organ Music Festival, with performers from Sochi's sister cities, and the jazz festival "Chernoye More."

The hall's lobby displays rotational exhibits by painters, sculptors and photographers, which is a nice bonus to hearing the melodies of an organ that has more than 2,500 pipes. 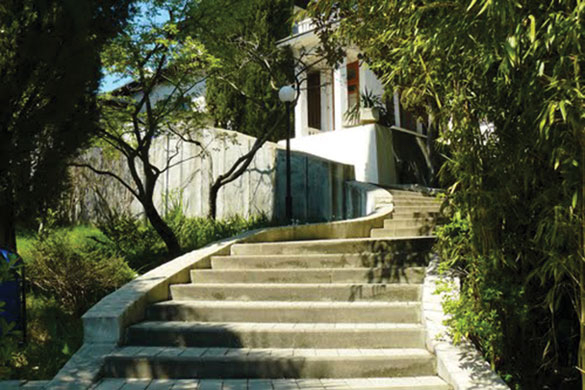 The Nikolai Ostrovsky Museum is housed in a building where the revolutionary Soviet writer completed his most famous novel, "How the Steel was Tempered," despite being severely sick, immobile and blind.

Nikolai Ostrovsky attended church school as a child, but later developed revolutionary views and went on to volunteer for the Civil War where he got severely wounded in the back. He was virtually immobile from 1927 until his death in 1936, and moved to Sochi to feel better. In 1930, the writer started working on his famous novel, which chronicles the Civil War and the making of a revolutionary spirit with a stencil of his own invention. At least 19 people also helped him to complete it — their handwriting can be seen on the novel's drafts.

"How the Steel was Tempered" became hugely popular in the Soviet Union and was even studied as part of the school curriculum, while streets were named in Ostrovsky's honor across the country. There is a monument to Ostrovsky on Kurotny Prospekt, close to the museum, which quotes a memorable phrase from the novel.

The interiors of the house that Ostrovsky got from the Soviet government as a present, and where he lived from May to October 1936, remain the same as they did immediately after his death. The writer's final abode in Sochi was transformed into a museum in 1937 and visited by 65,000 people during World War II. Most of them were wounded soldiers sent to recover in Sochi hospitals.

The museum has more than 37,000 showpieces including rare books, documents, icons, paintings and personal items. In addition to Ostrovsky, there are exhibits on other Sochi-related writers, including Boris Pasternak, Vladimir Mayakovsky, Vassily Grossman, Yevgeny Shvarts and Mikhail Zoshchenko. 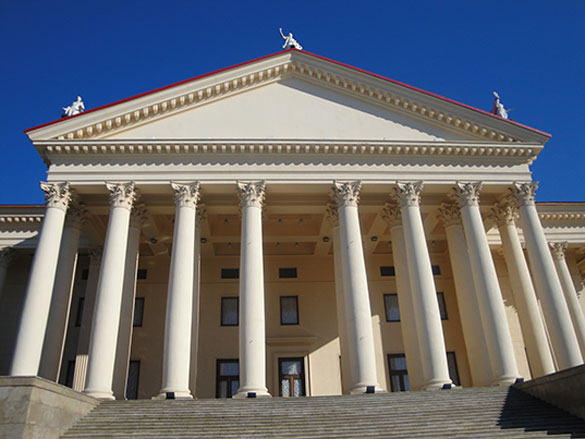 The towering Winter Theater is hard to miss. According to local legend, Josef Stalin, who is known for his affinity for imposing structures, chose the theater's architectural sketches himself. Stalin's personal box is located to the right of the stage and is built in such a way that others cannot see the person inside while the viewer can easily watch over everyone in the audience. One historian even claimed that the box had its own communications system and underground tunnel leading to it. Today, however, it is used to store set decorations and the tunnel, if there is one, is likely out of use.

Stalin's vision materialized in a spacious 970-seat theater that is surrounded by 88 columns and crowned with a giant crystal chandelier. The portico features the figures of three Greek muses that symbolize art, architecture and sculpture. The figures were created by one of the Soviet Union's most celebrated artists, Vera Mukhina, who won five Stalin Prizes during her life and is the author of the landmark Worker and Kolkhoz Woman monument in Moscow that became a symbol of the country's socialist epoch.

The Winter Theater was built within three years and opened to audiences in 1938 with Nikolai Rimsky-Korsakov's "The Tsar's Bride" opera about Ivan the Terrible's brief marriage to his third wife, who died days after their wedding.

The theater quickly became a coveted performance destination for artists and has hosted numerous prestigious festivals, international seminars and film extravaganzas, including the Kinotavr. Soviet tourists had considered it their duty to attend a show here and pack the program in their luggage. 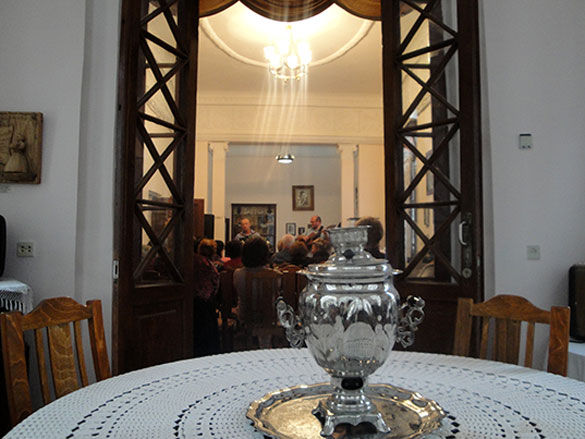 Valeria Barsova was a successful opera singer with a memorable coloratura soprano voice. She began her career by singing with the famous Russian bass singer Fyodor Shalyapin in Moscow's Hermitage Garden and a year later, in 1920, was already performing onstage at the Bolshoi Theater.

Josef Stalin was one of Barsova's powerful fans, and arguably it is thanks to his efforts that the Sochi deputies bestowed the opera diva with a land plot within a short walking distance of the Summer Theater where she loved to perform. The singer built a dacha in Sochi and lived there for 20 years until her death in 1967.

In her will, Barsova handed her beloved dacha over to the city, and it was turned into a children's art school. Now it is a museum that showcases more than 1,000 of the singer's personal items and her opera recordings. The museum has a cozy audience hall and regularly hosts chamber concerts and poetry evenings. 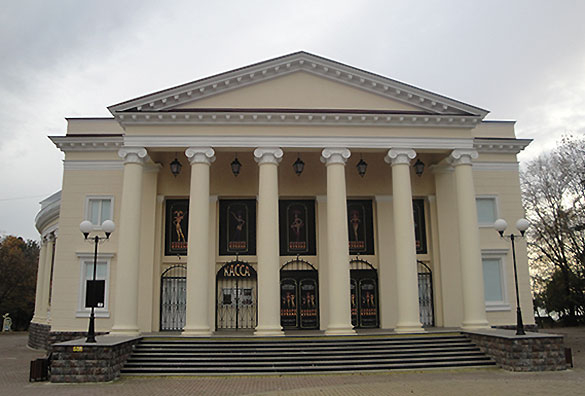 If it seems strange that a quiet and melancholic park would be named in honor of a tireless Red Army commander, that's because it was not the original intention. The Frunze Park, one of the oldest in Sochi, dates back to the start of the 20th century and originally had less menacing names, including Vereshaginsky and Yermolovsky. There were tennis courts set up as well as areas where people could practice gymnastics or play croquet. The park got its current name in the 1930s after Mikhail Frunze's mysterious death following surgery.

The open-sky Summer Theater was built in the park in 1937 and was a popular performance venue, hosting symphonic orchestras, dance collectives and jazz bands.

The theater came into severe disrepair at the end of the 1990s and was restored only in 2013, though some city residents who had welcomed the repairs work were left bewildered when it reopened as a Cuban cabaret and occasional cinema for live martial arts fights. The theater's new administration has tried to reassure them by voicing plans to invite foreign artists and symphonies to perform there.

The reconstruction has given the Summer Theater new heating and ventilation systems, which allows it to work year-round, more comfortable seats and a catering service so you can have meals served to you during the shows.