WASHINGTON — Russia is not cooperating enough in sharing intelligence with the U.S. about possible threats by militants to attack participants at the Winter Olympics in Sochi, U.S. security officials say.

"I would say that Russia has not been forthcoming in sharing specific threat information," said a senior U.S. official.

A second U.S. official said the U.S. believed Russia has established effective "ironclad" security measures in and around Sochi, but affirmed that Washington is concerned about Moscow's reluctance to share threat information.

After two suicide bombings killed 34 people in the southern city of Volgograd last month, Russia has been keen to assure athletes and spectators that the Olympics in Sochi, in the turbulent North Caucasus region, will be safe.

Islamist militants in the North Caucasus have threatened to attack the Games. On Saturday, a militant group that claimed responsibility for last month's bombings in Volgograd told Russians to rebel against President Vladimir Putin or face further attacks.

In a statement posted on its website, the North Caucasus-based group Vilayat Dagestan said the two Volgograd bombings, of a train station and a trolleybus, were a response to "atrocities carried out by the disbelievers on the ground of the Caucasus."

"Gone are the days when it was possible to destroy Muslims gratuitously," it said. "Today, one mujahed could destroy dozens or even hundreds of people in your cities. And do not think that these are isolated cases and that you will not feel the losses. The number of such bombings will only grow, and they will overtake many of you."

"The Kremlin gang leaders make cannon fodder of you and your children, while they themselves accumulate billions in this war," said the group. "If you do not decapitate this hydra, you will not see a quiet life."

A U.S. official said that given the formidable security in Sochi, the most likely targets for attacks are other places, including Moscow. 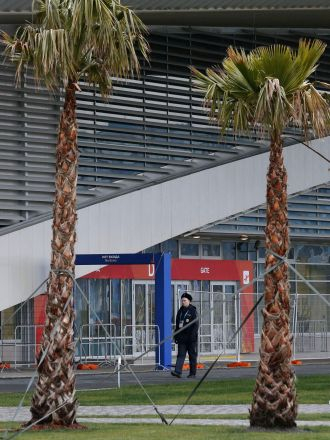 A police officer patrolling outside a venue at the Olympic Park on Friday.

The U.S. officials did not give details of possible threats. Their expression of concern came despite a phone conversation last week between Putin and President Barack Obama, during which security in Sochi was discussed.

White House press secretary Jay Carney said the U.S. had "offered its full support, and any assistance to the Russian government in its security preparations for the Sochi games." He added that FBI and U.S. diplomatic security personnel would be sent to Sochi to work with Russian authorities.

The U.S. is offering American technology used to thwart roadside bombs in places like Afghanistan to bolster Russia's security during the Olympics and the U.S. military is making two ships deployed in the Black Sea available if needed during the Games.

On Friday, U.S. Defense Secretary Chuck Hagel said that he and General Martin Dempsey, chairman of the Joint Chiefs of Staff, have talked to their Russian counterparts about security for the Olympics, including the need to ensure the protections of U.S. citizens.

"If we need to extract our citizens, we will have appropriate arrangements with the Russians to do this," Hagel said, noting that the U.S. will have two warships in the Black Sea during the Games.

"As of right now, the Russians have not requested any specific assistance or technology. We want them to know that if they need our help, we want to help," Hagel told Pentagon reporters.

French Defense Minister Jean-Yves Le Drian, who was alongside Hagel for a Pentagon briefing, said France also has received no request for assistance from the Russians and added: "If the question is do we have the intention to ensure the protection of your citizens that might have problems in Sochi, the answer is yes."

Pentagon spokesman Rear Admiral John Kirby said the U.S. military was conducting "prudent" planning in case any American assets might be required during the Games. But he added that security was up to Russia.

"The U.S. has made clear very early on [to Russia] that we are willing to assist in any way that we can. There has been no request for such assistance," Kirby told a news conference.

"And I believe they are applying as much energy as possible to providing security for the Games," he said.

Dmitry Peskov, Putin's chief spokesman, affirmed Russia's view that decisions about how to safeguard the Olympics are the host country's responsibility.