A resilience gene in German chemical giant Bayer's corporate DNA has not only helped it to become a world leader in its 150 years of existence, but also made it a durable player on Russia's not-always-level field of commerce.

Despite the nationalization of its assets by the Bolsheviks, setbacks following World War II and challenges of climate and bureaucracy in Russia, the company's health care division is in 4th place on the local pharmaceuticals market. It plans to sell 910 million euros ($1.3 billion) worth of health care products here annually by 2017.

"Whoever has the best nose to enter early, to be in the right place at the right time, gains the advantage," said Vera Nehoda-Hahn, managing director of Bayer Russia, referring to emerging markets in general.

Bayer has found that its culture of innovation has been a key element in helping it to survive and thrive in this market, where it has learned to adjust chemical formulae to compensate for extreme weather and muster reserves of patience for getting the paperwork necessary to set up and operate complex manufacturing facilities here.

Innovation from the Start

Before the company's founding in 1863 in Barmen — now Wuppertal — Germany, the textile industry counted on rare snails and other hard-to-catch organisms for producing dyes, making any article of clothing with bright colors an expensive and rare item.

The partnership between dye salesman Frederich Bayer and master dyer Johann Weskott capitalized on the only recently discovered technologies for the commercial production of industrial dyes from coal tar — considered a seminal moment in the birth of the petrochemical industry.

Russia was where Bayer's multinational experience started. After getting on its feet at home, in 1876 the company turned its gaze on the empire to the east and began dye-making operations in a rented cellar in Moscow with one hand operated mixer. Seven years later Bayer built a full-scale plant.

By 1913, Bayer in Russia became the country's biggest dyestuffs manufacturers and the most important foreign holding of the German dyestuffs industry. It employed 414 people, produced 2,300 metric tons of dyestuffs annually and had a property value of 8.3 million marks.

This was an approximate equivalent of $2 million — at the time when an average car in the U.S. cost about $6,000.

But following Germany's defeat in World War I and the rise to power of the Bolsheviks, Bayer's assets in Soviet Russia were nationalized.

Thanks to the addition of a chemist to its team, Bayer began mass production of the pain reliever acetylsalicylic acid 1899. Popularized with the trade name Aspirin, the company's unique innovation was to sell it not in the usual powder form, but as a tablet, and emboss it with the cross logo that is still there today. It was this healthcare division, along with a burgeoning chemical business, that would be part of company's return to Russia and subsequent success here.

In 1971, Bayer subsidiary Maschinenfabrik started producing polyurethane foam moldings for export to the Soviet Union. And in 1978 Bayer opened a representative office in Moscow and re-established its strong presence in the country step-by-step. 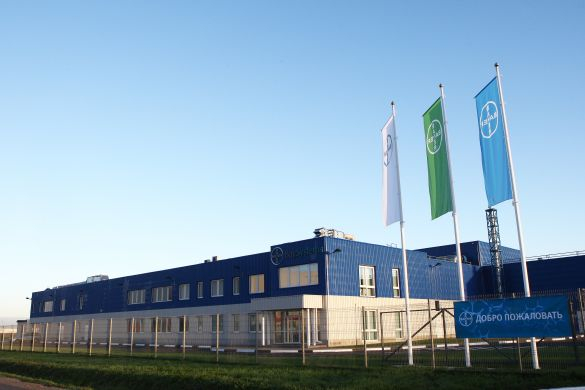 The Noginsk facility is a key part of Bayer's localization efforts in Russia.

Opening an office in Russia shortens communication lines with customers, as the local market was and is seen to be of significant importance, said Bayer's chief for Russia.

Localization of production, which came next, had the same goal of improving market reaction time.

In 2010 the company opened a polyurethane production facility in the Noginsk industrial park, east of Moscow. Even by Bayer's own high standards, the factory is considered to be one of the most advanced of its kind in the world.

The location was chosen based on its ability to satisfy logistical requirements, which Nehoda-Hand said are especially challenging in a country like Russia with underdeveloped infrastructure and vast territory.

"Logistics is very important for us. Noginsk is nicely located and has good eastbound connections. And the industrial park is professionally managed so it generally matched our requirements," Nehoda-Hahn said.

Another reason why Bayer material science is localizing here is the need to be close to the customer and adapt formulae very quickly, especially considering the climate zones Russia has, she said.

"The chemistry that is working in St. Petersburg will not work in Norilsk. You need to heat up the system and have different ingredients to make that happen. If you think that one formula fits all needs, you are completely wrong," Nehoda-Hahn said. "Also, if you are producing something locally, although facing the existing challenges of production, you can get to the market much faster versus when you are importing into the country," she added.

Besides logistics, the company has also been challenged by slow registration procedures when creating new products.

"Current pesticide registration procedures in Russia leads to modern solutions being introduced here much later than in many other countries, including neighboring ones," Nehoda-Hahn said.

Another drawback of the pesticide regulation is that the company cannot test products under development here that are not registered in Russia.

This leads to a combination of ingredients that does not necessarily fit local needs or desired product specifications because there is no chance to test and adjust them in advance, the executive said.

This has had a negative impact on the competitiveness of the Russian agricultural sector because local farmers have fewer plant protection products to choose from in comparison with rivals from other countries.

But despite the hurdles, the company is bullish enough to have localized elements of its health care business as well.

In 2012, Bayer health care and local drug manufacturer Medsintez set up a strategic partnership to jointly manufacture and commercialize diagnostic imaging products as well as antibiotics. The venture started with full cycle manufacturing of the antibiotics at the existing production line of Medsintez in Novouralsk, in Sverdlovsk region.

"In October we successfully produced a test batch of high quality. We are planning to start production with our partner in the second quarter of 2014," Nehoda-Hahn said.

The main reason why production could be set up so quickly was because our partner is very successful and goal-oriented, she added.

Russia's accession last year to the World Trade Organization is a factor that Bayer is counting on to help its localization efforts flourish.

"We have already seen the first results — lowered customs duties since September — which is making the country more competitive," the executive said.

The overall key to success for any country, she said, is all about building up industry that is competitive globally and not just focused on the local market, which is too small.

Global management is convinced of the long-term potential. Russia has all the signs of becoming one of the company's top 10 priority markets in the world by 2022, said Bayer CEO Marijn Dekkers.

The Russian market has many opportunities and great potential for further development, Nehoda-Hahn said.

"The economy is growing nicely for many years," she said. "Though the crisis has had its effect on Russia, if you compare what we are having here with mature markets in Europe — there is zero percent growth in countries like France, Italy, Greece — of course there is an opportunity."