Foreign Minister Sergei Lavrov met in Paris on Monday with U.S. Secretary of State John Kerry to discuss the long-awaited Syrian peace conference, which is scheduled for next week in Switzerland but still does not have the confirmed participation of Syrian opposition groups.

Topics such as exchange of captives, humanitarian aid and a ceasefire will also be discussed, Lavrov said, adding that Russia, the U.S. and the United Nations had urged the Syrian government and opposition to agree on a ceasefire and exchanging captives by the beginning of the peace talks.

Russia and the U.S. have sparred over how to seek a resolution to the civil war in Syria, but Lavrov and Kerry have managed to reach agreement on certain steps toward peace, including  convincing the Syrian government to destroy its chemical weapons stockpiles and to participate in the planned talks with the opposition.

In recent months, the two countries' positions on the situation in Syria also seem to have grown closer, with the U.S. becoming more concerned about extremist groups operating in the country, a trend that Russia has frequently spoken out about. In December, the U.S. and Britain suspended delivery of some units of humanitarian aid to rebels, worrying that they could be commandeered by extremist groups linked to al-Qaida.

At Monday's meeting, Kerry said Russia and the U.S. had common views on many issues relating to Syria, including the fact that they both have insisted on seeking a peaceful resolution to the conflict.

Emphasizing the chummy personal relationship Kerry and Lavrov have developed, Kerry opened the meeting by handing Lavrov a gift of two Idaho potatoes, to Lavrov's apparent delight. The Russian side reciprocated with a present of a pink fur cap to the U.S. delegation.

The peace talks, known as the Geneva II conference and first scheduled to take place last year, are now set for Jan. 22. The conference will bring together the Syrian government and the opposition, as well as delegations from some 30 states, the UN, the European Union, the Arab League and Organization of Islamic Cooperation.

"We expressed our concerns and urged the Syria National Coalition to determine its position as soon as possible and to cooperate with other opposition groups in order to make the opposition delegation as representative as is required by last year's Geneva Communique," Lavrov said after meeting with Kerry and UN and Arab League Special Envoy to Syria, Lakhdar Brahimi, in Paris, Interfax reported. 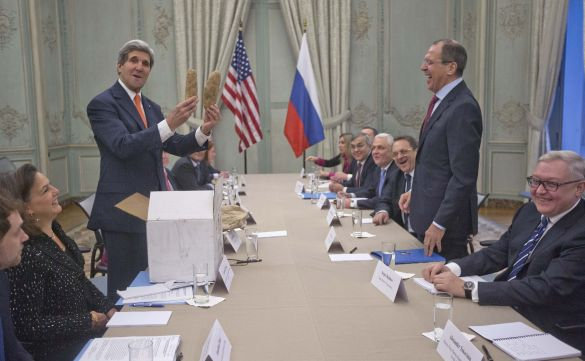 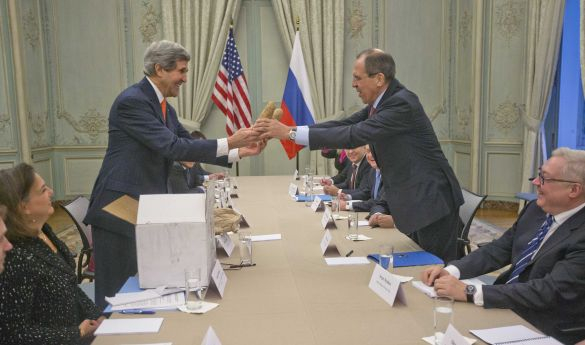 U.S. Secretary of State John Kerry presenting Russian Foreign Minister Sergei Lavrov with two Idaho potatoes in Paris on Monday. The gift may have lightened the mood ahead of talks on resolving the Syria crisis.

Lavrov also met in Paris with Ahmad al-Jarba, president of the Syria National Coalition — an opposition group that Russia has long criticized — and asked him to ensure that the entire Syrian opposition would take part in the peace talks. The group is expected to announce its decision on participation by Friday.

Although Syrian President Bashar Assad is not expected to attend the Geneva talks, Syria's Deputy Foreign Minister Faisal al-Mekdad said Sunday that his delegation would adhere to the president's wishes.

Disagreements on how a political transition should be made in Syria and whether Iran should participate in the peace talks still linger.

In a statement released Sunday, 11 Western states calling themselves the Friends of Syria — including the U.S., Britain, France and Gulf powers such as Saudi Arabia — said the goal of Geneva II was to "put an end to the current despotic regime through a genuine political transition." Russia earlier said the current regime was legitimate.

In Paris, Lavrov and Kerry also discussed the role of Iran in the peace talks, a topic that Russia and the U.S. have had trouble agreeing on. The U.S. sees Iran as a a military backer of Assad. Similarly, UN Secretary General Ban Ki-moon invited more than 30 countries to the talks but excluded Iran.

"For us, the participation of Iran and Saudi Arabia is necessary," Lavrov said, without specifying whether he and Kerry were able to reach an agreement on the matter on Monday.

Yevgeny Satanovsky, head of the Middle East Institute, a think tank specializing in Middle East studies, said that the U.S. and Russia  on the Syria conflict would probably not be long-lasting.

"The U.S. changes its position all the time. I would not be surprised if once chemical weapons in Syria were eliminated, the U.S. position would flip-flop 180 degrees," Satanovsky said by phone.

He also said that it was entirely possible that the peace talks would not take place at all, and that even if they did there would be no result.

"The result of this conference is zero by definition; everyone in Russia understands this. The conference is needed not to find a solution but to talk, that is what diplomats are paid for," he said.

Japan has warned against its interests in the project being "undermined."