Cossacks in their traditional lamb's wool hats and coats with epaulettes will be patrolling the resort of Sochi for next month's Winter Olympics.

Russia has imposed a security clampdown in Sochi to try to ensure the safety of the Games, which are a sworn target of Moscow's most wanted man, the Islamic insurgency leader Doku Umarov.

The Games are a prestige project for President Vladimir Putin, meant to showcase Russia's modern face more than two decades after the collapse of the Soviet Union, and the Cossacks bring with them their own stamp of national pride.

Cossacks traditionally served the Russian tsars on the borders of their empire and lived in relative freedom but were persecuted in the Soviet era.

Neither part of the police nor the military, they have enjoyed a rapid revival since the collapse of the Soviet Union in 1991, becoming a staunchly conservative social force invited by local officials to join security efforts.

Their brand of Russian Orthodox patriotism has won public praise from Putin.

But critics accuse them of fierce nationalism and their presence can add to the tension between ethnic Russians and minorities, especially in cities such as Moscow, where many migrants are Muslims from the North Caucasus and ex-Soviet republics in Central Asia. 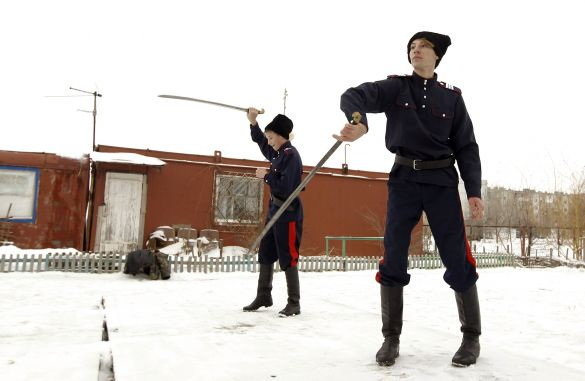 They will join the massive security operation in Sochi, located a few hundred kilometers from the North Caucasus, where Islamist separatists are fighting to carve out their own state.

"A total of 410 Cossacks will be on duty on train stations, the airport, as well as Olympic venues to carry out patrols together with the police," said Konstantin Perenizhko, a deputy to the regional Cossack military leader.

They were due to start work Friday, four weeks before the Games start on Feb. 7.

Cossacks have also been patrolling streets, transport networks and shopping malls in Russia's southern city of Volgograd after two deadly suicide bomb attacks there in December.

Alexander Tkachyov, the governor of the Krasnodar region, which includes Sochi, first launched Cossack patrols with some 1,000 men in 2012.

"We ran surveys among the inhabitants of our region and some 80 percent of them approve of such activity by the Cossacks because it led to a visible decrease in street crime," Perenizhko said, adding that the men on patrols will not be armed.