Floods, armies, space travel, dreams of Eurasian integration and the prosperity of the Far East all dragged President Vladimir Putin from the comfort of Moscow in 2013.

But a review of the catalog of Putin's travels around Russia this year, indicates that international sporting events caused him by far the most anxiety.

Judging by the number of trips he made to Sochi to inspect the preparation for the Olympic Games and the meetings held with domestic and international authorities on the subject, this event, due to commence in just over 40 days' time, worries the head of the state the most.

In second place on the list of priorities outside Moscow was the Universiade held in July in Kazan, which Mr. Putin visited three times this year.

In total, Putin took 38 official trips to 28 different regions in Russia this year. Most of them were ranged along the country's vast border.

The Moscow Times recapped the most significant of Putin's journeys in 2013.

1. Jan. 11 — Visit to Krymsk, Krasnodar region, where Putin toured a new settlement built to house victims of a flash flood that devastated the area in summer 2012. 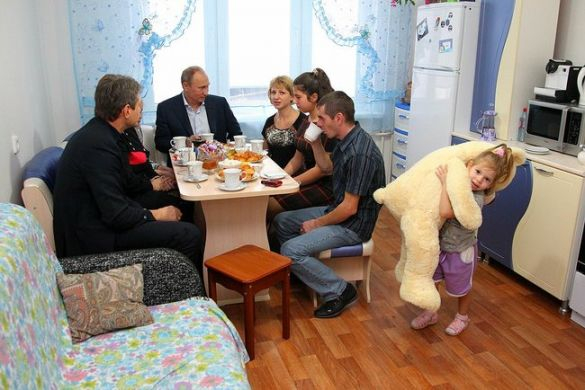 Putin visiting a family in Krymsk in the aftermath of the flood. (kremlin.ru)


On July 6, 2012, water inundated the towns of Krymsk, Gelenzhik and Novorossiysk, as well as several villages in the Krasnodar region, flooding 7,200 residential buildings and killing more than 170 people.

In the aftermath of the catastrophe, local authorities were lambasted for their failure to warn residents of the impending deluge, and volunteers poured in from other regions to provide aid. Each Krymsk resident received 110,000 rubles ($3,370) and an additional 5,000 rubles per square meter of housing that required repairs.

In August 2013, four former municipal and district officials in Krymsk and the surrounding district were found guilty of negligence for failing to prevent casualties. 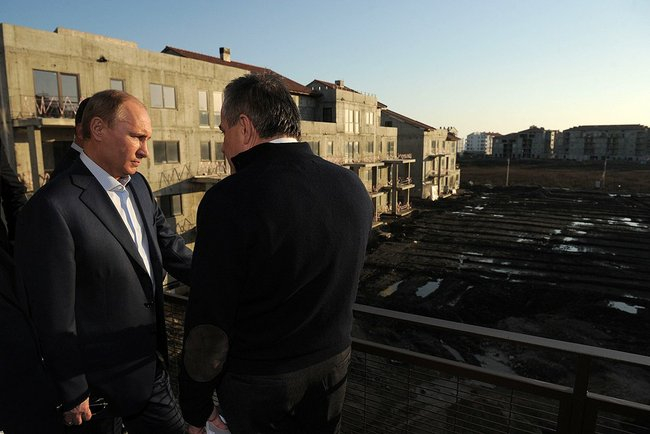 Putin inspecting the construction site of the Olympic village. (kremlin.ru)

Looking over the bobsled track, slated to open in summer 2013, Putin was informed that the track's completion had been initially planned two years prior to that date, and that its cost had jumped from 1.2 billion rubles ($37 million) to 8 billion rubles. State-owned Sberbank, a shareholder in the Krasnaya Polyana complex, which the track is part of, would have to fork out the additional funds.

"Way to go," Putin said with a flicker of a smile. "You are all doing a great job."

The cost of preparations in Sochi have spiraled as the games approach, while delays have proved endemic. An initial cost estimate of 300 billion rubles ($9 billion) has risen to 1.5 trillion rubles, up to 1.3 trillion rubles of which will have to be provided by the state.

At the time of Putin's visit, construction work on the Olympic facilities was said to be 80 percent complete.

Putin visited Sochi on two more occasions this year — in October and November — to encourage and shame contractors into finishing the facilities. With just over a month before the opening ceremony, the Fisht stadium — the centerpiece of the Games remains unfinished.

3. Mar. 19 — Visit to Kazan, the Republic of Tatarstan, to inspect the preparation for the Universiade to take place there in the middle of July. 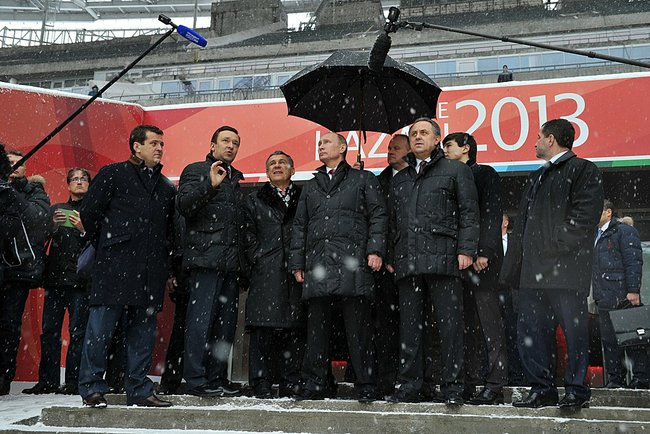 Putin posing after an inspection of the construction site of the Kazan arena.

The cost of preparations for the student Olympic Games is estimated at $4.5 billion to almost $7 billion, depending on the source.

Due to the stream of money into the region in the run-up to the event, the cost of residential property in  Kazan soared, making it one of the most expensive cities with a population of more than a million in Russia.

Putin visited the city twice more in July, to open the Games and to congratulate the athletes.

The attention yielded fantastic results. Competing athletes from 160 other countries, Russians won 155 out of 351 gold medals — 44 percent — the most successful performance ever recorded. 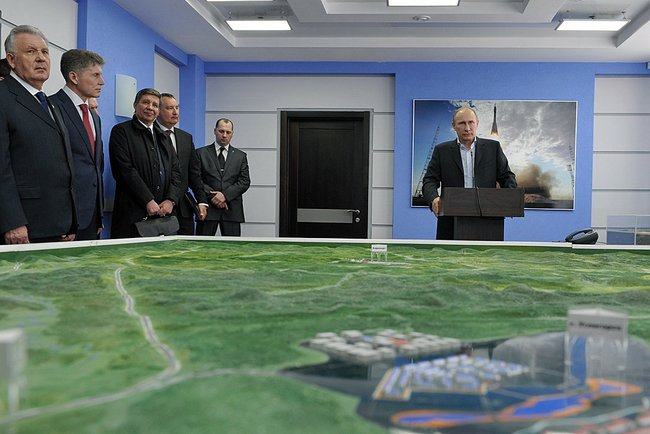 Putin at the Vostochny space facility in the Far East. (kremlin.ru)

The project to build a space launch facility in the Far East is the most ambitious of its kind since the construction of Baikonur in Kazakhstan in late 1950s. Its completion will save Russia the annual $115 million cost of renting the launch pad from the Kazakhs.

Building at Vostochny, costing an estimated of $6.7 billion, began in 2012. The first rocket launch is expected in 2015.

Managers at the Russian Federal Space Agency, which supervises the project, have come under fire for not meeting the deadlines. In October, Vladimir Popovkin, the agency's head, was fired. One of the reasons was said to be the delays with the new cosmodrome.

Procrastination is the least of the project's worries, said insiders in the aerospace industry: the fact is that Russia has nothing to launch from Vostochny. The facility is intended for heavy-lifting rockets, but the new Angara family of rockets destined to provide launch services in multiple weight classes has suffered a string of delays.

5. May 30 — Meeting with the International Olympic Committee, or IOC, in St. Petersburg. 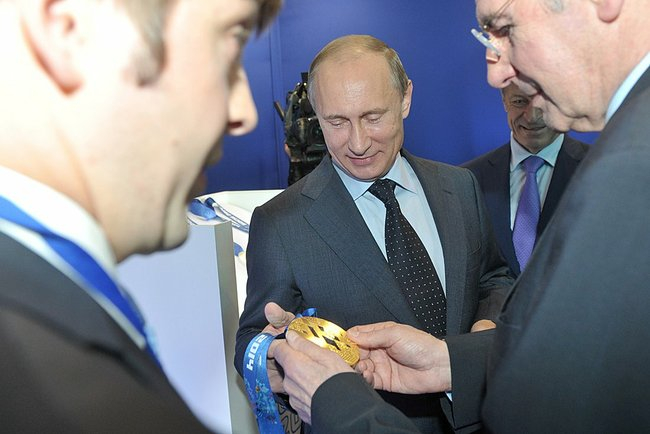 Putin inspecting the medals to be awarded at the Olympic and Paralympic Games in Sochi. (kremlin.ru)

Putin discussed with IOC members the design of the medals for the Sochi Olympics and the events to be included in the Games.

Putin also presented the design for the Olympic torch, which would later in the year travel from its origins in Greece to the depths of Lake Baikal, the North Pole and be carried into space.

Along the way, the torch would ignominiously go out numerous times. One torchbearer would be set alight and one would die while carrying the flame. 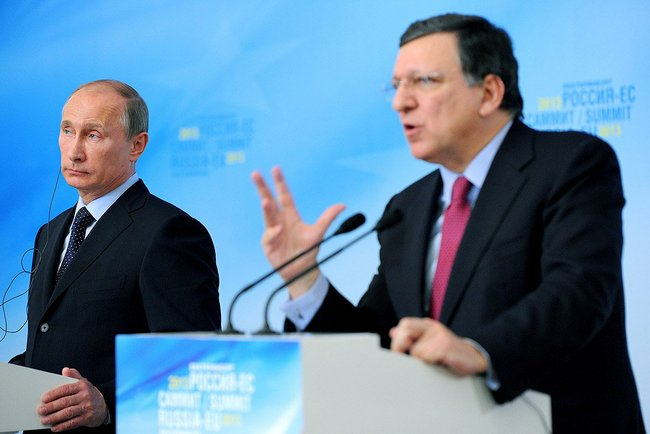 The two parties went into the meeting with high hopes of a visa-free travel agreement between Russia and the EU and an understanding on how to solve the conflict in Syria.

The visa agreement failed to materialize because the two sides could not agree on the true nature of Russian-European relations. Vladimir Putin talked economics, while European Council President Herman Van Rompuy mostly focused on shared values and human rights.

On Syria, the stumbling block was weapons deliveries. Russia insisted on its right to sell the S-300 missile system to the acting government of Syrian President Bashar al-Assad, while the EU refused to impose an embargo on the supply of arms to the rebels.

Following the talks, there was a display of Yekaterinburg's proposed site for the World Expo-2020, which the city was making an expansive bid to host.

In late November, Dubai was chosen to host the expo, depriving Russia of the chance to spend an estimated $10 billion to $15 billion on the event.

7. Jul. 16-17 — Trip to the Zabaikalsk region to discuss economic development and inspect the armed forces. 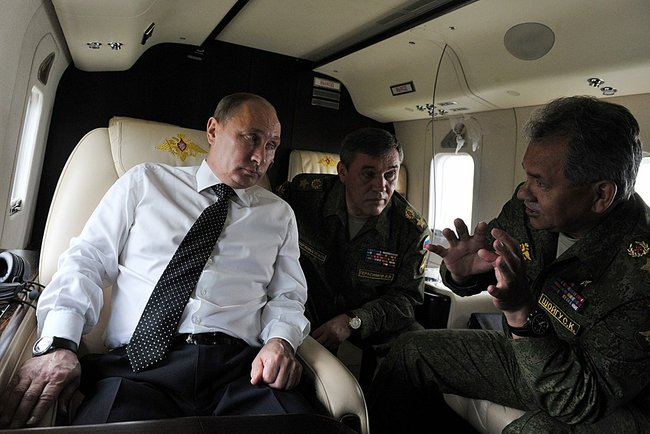 Zabaikalsk, which has abundant natural resources and access to the Trans-Siberian Railroad, is one of the poorest in the country.  The unemployment rate is more than 10 percent, double the Russian average. Putin told local authorities that the way out is to develop entrepreneurial spirit and exploit the region's favorable geographical location.

Putin then participated in the finishing stage of one of the largest military maneuvers in recent history, involving five armies, as well as air force and air defense units and the navy — more than 160,000 personnel in total.

Russians in uniform are a passion project for Putin. The army and the police take the second and third largest portions of state spending, respectively, after pensions. Twenty trillion rubles will be committed to the ongoing full-scale modernization of the army through 2020.

Putin has repeatedly said that the economic and social development of Siberia and the Far East is a key priority. Visiting several regions in the area, he chaired meeting after meeting dedicated to bolstering the local economy and attracting people to these far-flung places.

Just prior to the Putin's visit, the Amur and Magadan regions had suffered the largest floods in decades.

Compensation for the flood victims was similar to that offered after the Krymsk floods — more than 100,000 rubles for each. A total of 3.2 billion rubles was allocated for compensations and cleanup work.

After touring deluged areas, Putin flew off to oversee the reconstruction of the Sayano-Shushenskaya hydroelectric power plant, one of the largest dams in the world. An explosion occurred at the plant in 2009, flooding nine out of ten hydraulic units and killing 75 people. The damage as the result of the accident was estimated at more than 40 billion rubles. 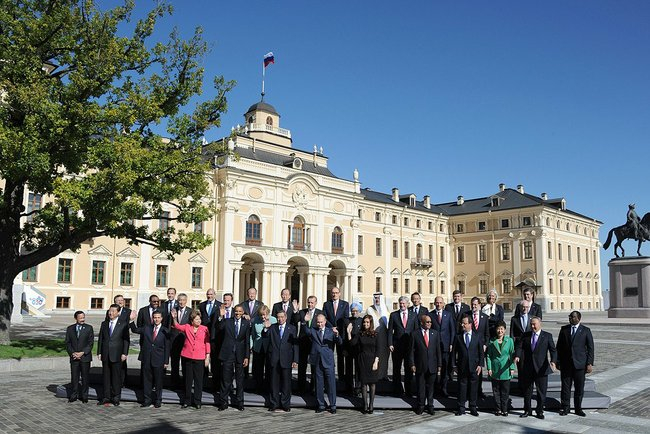 Syria topped the agenda of the G20 summit in St. Petersburg. (kremlin.ru)

Putin hosted the Group of 20 summit in his hometown.

Despite the declared focus on the world economy, the conflict in Syria dominated the proceedings, as alleged chemical weapons attacks triggered sharply differing reactions from Putin and U.S. President Barack Obama.

Russia's decision to grant asylum to Edward Snowden and Russian laws related to LGBT people did nothing to ease tensions.

The summit did yield one economic achievement. The BRICS countries — Brazil, Russia, India, China and South Africa — signed an agreement to contribute to a $100 billion currency pool designed as a stabilization fund in the event of global financial turmoil. 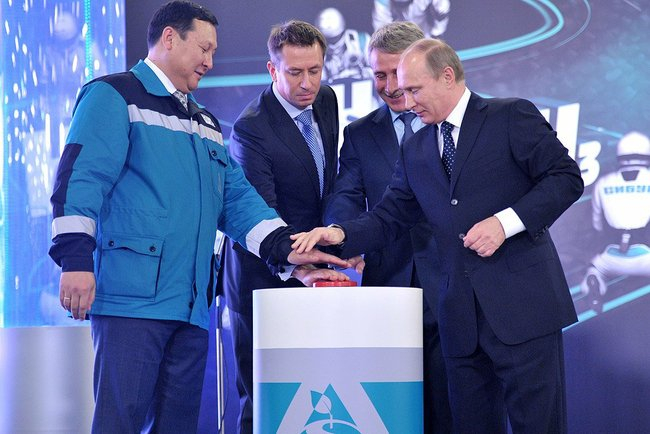 Putin about to push the red button. (kremlin.ru)

Putin pushed the red button launching one of the world's biggest polypropylene factories near Tobolsk.

Tobolsk-Polymer, a subsidiary of Russian petrochemical company Sibur, will annually produce 500,000 tons of the plastic, which is used in everything from packaging to car parts, and will employ 460 workers.

The project represented a triumph of international cooperation — more than 320 companies from 23 countries were involved in the $2 billion plant's construction.

11. Nov. 22 — Visit to St. Petersburg to hold talks with the Turkish prime minister. 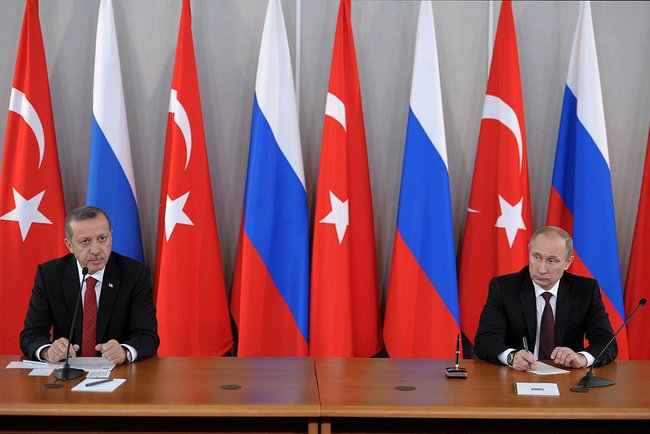 In St. Petersburg Putin met with Tayyip Erdogan and talked about boosting the $34 billion turnover between the two countries.

In Russia, Turkish companies are mostly involved in construction — the biggest projects are in Sochi and  St. Petersburg's international airport. Russian companies in Turkey are focused on energy-related projects, where besides the Blue Stream and the South Stream gas pipeline projects there is a joint venture to build the first nuclear power plant in the country.

Turkey is also a a tourism mecca for Russians — more than 3 million tourists traveled to Turkish resorts in 2012.

12. Dec. — Apart from an overseas jaunt to Armenia, Putin stayed home, traveling only to the Kremlin from his residence in Novo-Ogaryovo in the Moscow region.

There, he took part in a meeting on Dec. 24 of the Eurasian Council, where the hot issue was Ukraine. Eurasian integration was probably the biggest international theme of the year, with Putin scoring a victory at the end of November when Ukraine suspended integration with Europe and began to bargain with Russia, which is trying to build its own trade bloc — the Customs Union — to rival the EU. Armenia, during Putin's stay in the country, agreed to join the Russian union.

Despite riots in Kiev against integration with Russia, by offering a 15 billion dollar aid package and a discount on gas prices to recession-hit Ukraine Putin has been able to remain at home and allow Ukrainian President Victor Yanukovych to come to him.

The price cap on Russian oil agreed by the EU, G7 and Australia is set to come into force on Monday. It aims to restrict Russia's revenue while making...
firm stance

Russia on Saturday denounced a $60 price cap on its oil agreed by the EU, G7 and Australia, even as Ukraine suggested it was not tough enough and...