Both Russian President Vladimir Putin (left) and Chechen leader Ramzan Kadyrov (right) have gone public with their affection for their pets.

Chechen leader Ramzan Kadyrov's dog has returned to its owner, after a several hours' search prompted by Kadyrov's messages about the disappearance of the canine.

The Caucasian shepherd, named Tarzan, had "left the residence in Grozny under unclear circumstances," Kadyrov said in an Instagram message posted on Wednesday.

One of the commentators on the website apologized for having to point out a spelling error in Kadyrov's Russian-language message, in which he wrote "unclear" as two separate words: "un" and "clear."

Among his praise for the dog, Kadyrov added that it had "never barked without reason, created no problems."

A few hours later, Kadyrov announced that the dog had been sighted in the Chechen capital Grozny, then traced to the town of Urus-Martan, and finally discovered in the neighboring republic of Ingushetia.

"Our boys have already left for Ingushetia, we are awaiting Tarzan's return home," Kadyrov said.

Kadyrov set up an Instagram account about a year ago, after Russian President Vladimir Putin and Prime Minister Dmitry Medvedev stole more than one heart with pictures of their pets. Kadyrov's previous messages included a photo of his "beloved cat Chanel," showing a sleepy looking cat in a leather carrier.

Unlike Putin's endearing photos frolicking with his dogs in the snow, which were posted on the Kremlin's website, Kadyrov's photos showed him sitting on a lawn about a meter away from his pet. Another photo showed him spreading his arms in a salutary gesture to the dog, which looked to the side.

Following Kadyrov's appeal on Instagram, some commentators offered kind sympathies: "I was very much upset when I read about this," one woman said. "Because I am willing to sacrifice my life for animals."

Kadyrov, who had offered a reward for help in finding his dog, thanked four men by their first names for bringing back the animal. It was unclear whether any reward was given, but Kadyrov said he had invited the men to his home, where they "had a pleasant conversation over a cup of tea." 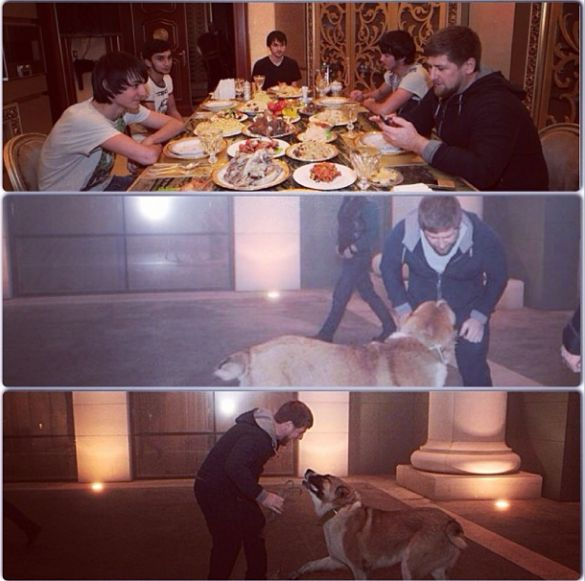 Kadyrov thanked his followers for their help with a photo collage on Instagram showing the dog's happy return home.

He also thanked his more than 210,000 Instagram followers for their support and compassion "during those long hours of search."