Two Pussy Riot members were released from prison on Monday under President Vladimir Putin's amnesty, but both derided the move as a PR stunt ahead of the Sochi Olympics and one vowed to continue her political fight.

Upon their release Monday, Maria Alyokhina, 25, and Nadezhda Tolokonnikova, 24, looked unbowed, walking out of the prison gates with their heads held high, as shown by photo and video reports, and speaking defiantly about both their future plans and the motivation of the authorities in freeing them.

The two were released three months before completing their full two-year prison terms on charges of hooliganism motivated by religious hatred for performing an anti-Putin “punk prayer” at Moscow's Christ the Savior Cathedral in February 2012.

While their early release was met with joy by many of their supporters on Monday, both the girls themselves and several human rights activists warned against viewing the amnesty as an indication of a softened attitude in the Kremlin.

Both Tolokonnikova and Alyokhina openly mocked the amnesty, saying it was aimed at improving Russia's image ahead of the Ferbruary Winter Olympics in Sochi and that it did not include all of Russia's perceived political prisoners.

Alyokhina, who was released first, at about 9 a.m. Monday morning from a penal colony in the Nizhny Novgorod region, told Dozhd television in her first interview after the release, that her attitude to Putin had not changed.

Later, Alyokhina told a press briefing in Nizhny Novgorod that she did not regret her participation in the anti-Putin performance at the Moscow church and even wished that she and her band members “had sung the song to the end,” Interfax reported.

“I am not afraid of anything anymore now, believe me,” she told British television ITN in a video report posted on Youtube.

Alyokhina said she would have rejected her release if she had the legal choice to do so, and called the amnesty a “sham,” as it included only four of the 12 defendants in another high-profile case, she told the St. Petersburg office of Ekho Moskvy.  The 12 defendants she was referring to, who are also widely seen as political prisoners, were charged for taking part in alleged riots during a protest on Bolotnaya Ploshchad in Moscow in May 2012.

Alyokhina also condemned Putin's failure to release women convicted of grave crimes who had children, as well as the fact that the amnesty applied to less than 10 percent of prisoners, she told Dozhd. 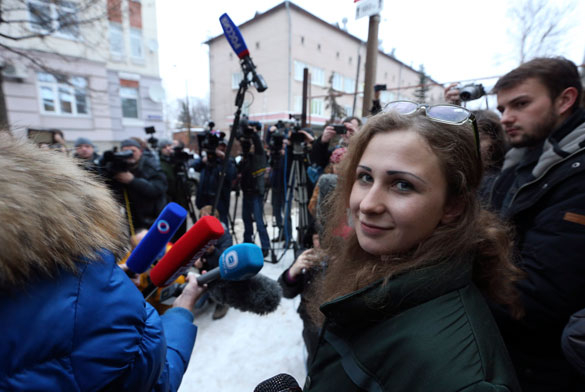 Maria Alyokhina speaking to journalists after her release on Monday.

As for the real reason behind the amnesty, she told Ekho Moskvy it was “related to improving the image [of Russia] ahead of the Sochi Olympics.”

Alyokhina and her lawyer, Pyotr Zaikin, did not take repeated calls on their mobile phones Monday afternoon.

Tolokonnikova, for her part, called the amnesty “absolutely laughable” since it was applied to her and Alyokhina only three months before the end of their prison terms and was linked to the Olympics, she told Ekho Moskvy.

Tolokonnikova also said she was “not going to stop political activities” because she “feels a sense of responsibility” for her country. She will consult opposition activists about what form her participation in political activities could take, she said.

Tolokonnikova's lawyer Irina Khrunova, reached on her mobile phone Monday, said she was not in Krasnoyarsk and was learning news from Tolokonnikova's husband Pyotr Verzilov. Verzilov said by phone Monday afternoon that he was too busy to talk to a reporter.

Tolokonnikova and Alyokhina were cited by various media as saying they intended to become defenders of prisoners' rights.

Alyokhina's first meeting after her release was held with a regional nongovernmental group that defends inmates, the Committee Against Torture. The goal of the meeting was for Alyokhina to consult the group regarding her complaints about prison conditions, Interfax reported.

Alyokhina was to arrive to Moscow by train late Monday night for a brief transit stop before flying to Krasnoyarsk to greet Tolokonnikova, who was released there.

In April 2012, Amnesty International declared three Pussy Riot members — Alyokhina, Tolokonnikova and Yekaterina Samutsevich — to be prisoners of conscience, saying they were prosecuted for expressing their political views and criticizing the country's leadership. The human rights group demanded their immediate release at the time.

A Moscow court sentenced the three to two years in prison in August 2012, after they pleaded not guilty to being motivated by religious hatred, but a higher court in October replaced the prison term for Samutsevich with a suspended sentence because she was prevented by a security guard from taking part in the performance.

In response to news of the girls' release on Monday, John Dalhuisen, Europe and Central Asia Program Director at Amnesty International, cautioned against viewing the move as a “benign act of clemency.”

He called the release of the Pussy Riot singers, as well as that of businessman Mikhail Khodorkovsky, and four Bolotnoye case defendants, “a politically expedient move in the run-up to the Sochi Olympics” and further proof of the politicization of justice in Russia,” he said by e-mail Monday, reiterating a statement he made last week.

Tatyana Lokshina, head of the Moscow bureau of Human Rights Watch, said that despite the joy over the release of the Pussy Riot members, the move also made her "sober up."

"Alyokhina and Tolokonnikova have served most of their terms, which was unjust," Lokshina said by phone. "From a legal standpoint, it is no victory," she said.

Lev Ponomaryov, head of the For Human Rights movement, agreed that their release should not eclipse the fact that their imprisonment was unjust.

He by phone that they "should not have been imprisoned" in the first place and said his movement would "make use of the [prison] experience" of Tolokonnikova and Alyokhina, should they become rights activists.