HAVANA — Russia and Cuba have quietly signed an agreement to write off 90 percent of Cuba's $32 billion debt to the defunct Soviet Union, a deal that ends a 20-year squabble and opens the way for more investment and trade, Russian and European diplomats said.

The two sides announced an agreement to settle the debt dispute earlier this year and finalized the deal in Moscow in October. It would have Cuba pay $3.2 billion over 10 years in exchange for Russia forgiving the rest of a $32 billion debt — $20 billion plus service and interest, the diplomats said.

It must still be approved by the Duma, Russia's lower house of parliament.

Negotiations on the form in which Cuba will pay the remaining debt are ongoing, the diplomats said, as even $320 million per year is a large sum for the cash-strapped country, which has labored under a U.S. embargo for decades.

Cuba's total export earnings are about $18 billion, including tourism and medical and educational services.

Neither Cuba nor Russia has made any official comment on the debt agreement. Cuban officials were not immediately available for comment.

Cuba defaulted on its debt in the late 1980s but recently has been trying to restructure the old debts to improve its international credibility.

Prime Minister Dmitry Medvedev, during a visit to Cuba in February, signed a general agreement to work out a formula and settle the old debt by next year. The decision rankled other countries grouped in the Paris Club of creditor nations because it broke ranks with the collective approach of the organization.

The Paris Club is an informal group of creditor governments including Canada, France, Germany, Japan, Russia, Britain and the U.S. as well as a number of smaller European nations.

The Paris Club reported that Cuba owed its members $35 billion at the close of 2012, now estimated at about $37 billion, which would leave the island owing between $5 billion to $6 billion of non-Soviet debt to the club's members.

The organization has a Cuba working group, which does not include the U.S.

Russia pledged to work with Cuba toward reaching an agreement with the Paris Club as part of the October settlement, one Russian diplomat said.

"The Paris Club should be grateful as it removes a huge amount of money from the table and makes an eventual agreement more likely," he said. 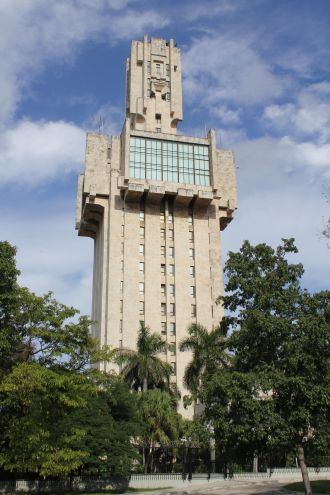 The Russian embassy in Havana is located in its Soviet predecessor.

While some Paris Club members clearly preferred a united front, one European diplomat said Russia's help in settling Paris Club debt could prove important and that a reduced debt would indeed be more easily negotiable.

Since the Medvedev visit, the Paris Club has put out feelers to the Cubans, and a few months ago two representatives traveled to the Caribbean island to meet with the central bank, the first such visit in more than a decade.

Unlike the International Monetary Fund and World Bank, from which Cuba is excluded under the longstanding U.S. trade embargo, the Paris Club does not issue multilateral loans.

Cuba releases very little information about its foreign debt. Last month the government reported its "active" foreign debt, accumulated after it declared a default in the late 1980s, as $13.6 billion in 2010. It no longer reports its "passive" debt from before the default and estimated at about $8 billion.

The Communist-run island has never included debt to the Soviet Union in its figures, claiming the amount was in overvalued convertible rubles and the country sustained massive damage from broken contracts when its benefactor collapsed.

Cuba has post-1980s default debt of hundreds of millions of dollars to Russia.

"The final deal recognizes some of the Soviet debt, and that is politically important for Russia. It also opens the way for more credit which is important for Cuba," a Russian diplomat said, like others requesting anonymity.

Three years ago, Cuba restructured its active government and commercial debt with China, estimated at about $6 billion. Last year, Cuba settled a dispute with Japanese commercial creditors dating back to the 1980s.

Under the Japanese agreement, 80 percent of the 130 billion yen debt (about $1.4 billion) was forgiven, with the remainder to be paid over 20 years.

Mexico recently forgave 70 percent of a $478 million debt that Cuba accumulated in the late 1990s, with the remaining $146 million to be paid over 10 years.

"The agreements with China, Japan, Mexico and Russia ease some outside financial restrictions on the Cuban economy and should facilitate trade ties with these countries," said Pavel Vidal, a former Cuban Central Bank economist now teaching at Colombia's Javeriana University.

"The austerity measures adopted by the government in 2009, and these accords to lower the foreign debt, help stabilize the island's finances at a very important moment when a significant monetary reform over three years [devaluation and elimination of the dual currency system] has begun," he said.

Raul Castro, who replaced his ailing brother Fidel as president in 2008, has drastically reined in imports, cut state payrolls and subsidies and pushed citizens into the private sector, while insisting the near-bankrupt government get its financial house in order.

In 2011, the Communist Party approved a five-year economic plan that called for efforts to "enhance Cuba's credibility in its international economic relations by strictly observing all the commitments that have been entered into," before and after the default.

The plan also called for expediting the rescheduling of Cuba's foreign debts and implementing "flexible restructuring strategies for debt repayment" as soon as it is practical.