Moscow city authorities are fighting back against complaints that winter days are too long and dark, especially now that the Kremlin has abolished daylight savings time.

The solution: thousands of new LED lights on Moscow's streets.

Over the weekend, City Hall wrapped up the first phase of the new lighting strategy, which is placing decorative lights and banners over major city streets and highways, pathways and more than 7,000 trees. In addition, LED garlands imitating the starry sky will hang over roadways, and decorative lighting constructions will be placed on lampposts.

The city has long strung up lights for the New Year's season, but the effort this year far surpasses those of previous years after concerns were raised about depression and other side effects associated with spending up to 18 hours a day in the dark during the winter.

The nights seem even longer after Dmitry Medvedev, as president, ended daylight savings time in 2011.

"Moscow receives seven to eight times less sunlight in winter compared to the summer, and the number of daylight hours goes down by half," said Pavel Livinsky, head of City Hall's fuel and energy department, which developed the lighting strategy.

Previously, lighting was mostly restricted to building facades and light poles on major streets and the Garden Ring, and it was usually switched on only for the holidays, thereby not fully meeting the city's needs during the autumn and winter seasons, according to the fuel and energy department's lighting strategy.

With the completion of the first phase Sunday, more than 4,000 trees are wrapped up in lights in the city center, and hundreds more are in the pipeline. New 3D structures and other lights have been raised on Tverskoi and Gogolevsky bulvars, across the Boulevard Ring, and along popular pedestrian zones such as Patriarshiye Prudy and Chistye Prudy. 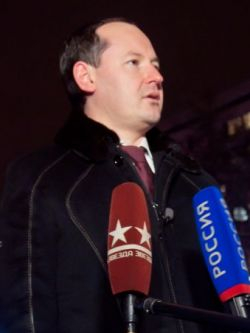 Overall, more than 12,000 new lighting elements and constructions will emerge across the city after the second and final phase is finished on Dec. 15. This is the installation deadline for lights to be raised on major roadways running across the Third Ring Road and the Moscow Ring Road.

The shades of the lights will vary depending on the season: warm gold, pink and orange will prevail in November starting from next year, giving way to seasonal silver, blue, violet, cool and warm shades of white from December through February to reinforce the impression of a snow-white city.

Lighting designer Maria Chernyak, the author of the lighting concept, said in an interview that 3D elements would change locations between recreation areas, pedestrian zones and walking routes every year to shape constantly developing city spaces and produce intriguing new impressions of well-trodden paths. She said this would encourage residents to go out on walks and to discover favorite places over and over again.

Livinsky said in an interview that the power drain of the seasonal LED lighting would be a low 1,350 kilowatts, a figure that is similar to the amount needed to light a small apartment building. He also said the lights would be energy-efficient and safe.

"The new innovations employ low-voltage 12-volt and 24-volt LED lights that are not harmful for trees and not dangerous for any kids who might touch them," he said.

Garlands are wrapped around trees and fixed without nails.

City Hall said figures were not yet available for how much the lights and electricity needed to power them would cost but said the work was being funded mostly from non-budgetary sources such as investors and sponsors, so the burden to the city budget was expected to be rather small.

The new lighting is being joined by New Year's decorations, which are organized by City Hall's media and advertising department. The snowmen, reindeer and fir trees have started appearing on the streets and will remain in place until Feb. 1.

A total of 73 Christmas trees will be raised in streets and squares across the city, including in Moscow's new southwestern territories, by Dec. 20, said Vladimir Chernikov, head of the media and advertising department, according to Rossiiskaya Gazeta. Thirty trees will have a completely new design that allows them to rotate.

The forthcoming Winter Olympics in Sochi will be a key subject for the New Year decorations. Sochi's Olympic mascots — a rabbit, bear and leopard — will greet Muscovites and visitors from posters and light installations, inviting them to go to Sochi and wishing them a happy new year.

Also, candle-shaped illuminations and a singing electric light fountain will brighten up Teatralnaya Ploshchad in front of the Bolshoi Theater, and a three-dimensional light installation imitating falling water will appear at the beginning of Gogolevsky Bulvar.

The overall price tag for the New Year decorations is about 380 million rubles ($11.5 million), as can be seen from the results of tenders announced by City Hall's media and advertising department. The amount is less than the 440 million rubles that City Hall initially earmarked for the decorations, an amount similar to what was spent last year. 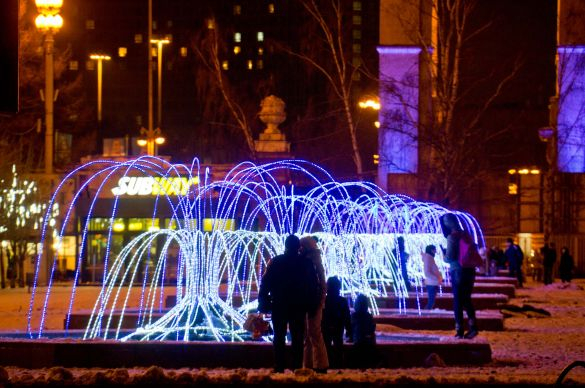 The thousands of lights installed city-wide will use the same amount of electricity as a small apartment block.

Lighting has been a city priority in recent years, with about 6.5 billion rubles allocated to improve architectural lighting in 2013. By September, 260 buildings along the Garden Ring had received new, uniform illumination, replacing the 100 motley-lit buildings that had previously stood on the road.

Livinsky said further improvement would involve facades along the major outbound highways like Kashirskoye, Yaroslavskoye and Leningradskoye shosses and would last year-round.

The improved architectural lighting would create a new image of Moscow at night by highlighting not only the main sites and streets but also bridges, which are prominent in the city landscape during the day but almost lost in the night, he added.

A company called Svetoproekt has won a tender to design the lighting for 38 downtown bridges over the Moscow River within the Third Ring Road. Designs for 22 bridges are finished, and the other 16 are in the pipeline.

The bridges are to glitter in all shades of natural minerals, gems and rocks. The lighting design for the Smolensky Metro Bridge was inspired by VatnajЪkull, an Icelandic glacier, while the Bolshoi Moskvoretsky Bridge will shine in gold and red, complementing the red-brick walls of the nearby Kremlin. The glittering bridges reflected in the river will lend the city a touch of natural beauty that it badly lacks, Livinsky said.