At first glance, Moscow could not be more different from Sochi.

The black tie Russian capital, 1,360 kilometers north of Sochi, has little time or patience for the Speedos and flip flops that dot the Black Sea resort's landscape.

But with less than three months left before the opening ceremony of the Sochi Olympic Games, Moscow and Sochi — two Olympic cities — do not seem as different. Both cities' Games have been plagued by bureaucratic headaches, calls for a boycott and numerous scandals, including authorities "cleaning up shop" at the expense of residents.

But whereas the 1980 Moscow Olympics were a cause for concern for Soviet leader Leonid Brezhnev — prompting him to write a letter to his future successor Konstantin Chernenko about the "enormous amount of money" to be spent on the Games — the Sochi Olympics seem to be- a call to bravado for President Vladimir Putin.

The exact cost of the Moscow Games remains unknown, but the Russian Federal Archives Agency's data suggests that it hovers around 2 billion rubles.

Three and a half decades later, Sochi's initial budget of $12 billion has risen to a vertiginous $51 billion, making the Games the most expensive in Olympic history.

Different times, different concerns. But Putin's and Brezhnev's respective Games are united by the bureaucratic processes that underpin then.

"Decision-making in Sochi, which comes from the president who oversees everything, is reminiscent of Soviet ways," said Mikhail Prozumenshchikov, deputy director of the Russian Federal Archive of Contemporary History.

"The extensive use of administrative resources is common to the Moscow and Sochi Games," he said.

Putin's Games — much like Brezhnev's — have already been fraught with Western criticism of the president's micro-management and decrees, adding to the corruption and human rights violations that have plagued preparations for the Games. 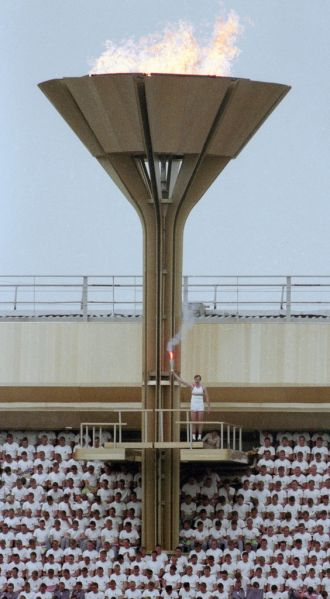 Although the Official Report of the 1980 Organizing Committee stressed that "the Soviet state had supported the idea of holding the Games of the XXII Olympiad in Moscow from the outset," Brezhnev secretly entertained doubts about hosting the event.

"Besides the enormous cost, there may be all sorts of scandals that could disgrace the Soviet Union. Maybe we should reconsider this issue and refuse to hold the Olympics," Brezhnev wrote to Chernenko, echoing a concern that might have crossed Putin's mind as more organizations and public figures have called for a boycott of the 2014 Sochi Games.

"It is difficult to explain why Brezhnev would write such a letter," said Prozumenshchikov. "We think he momentarily became intensely worried about the country's economic situation when he wrote the letter in late 1975 and believed hosting the Olympics would only worsen the situation."

Both of Brezhnev's fears materialized. Not only did the Soviet economy plummet after the Moscow Games, but the country was humiliated by a boycott initiative led by the U.S. to protest the U.S.S.R.'s invasion of Afghanistan in December 1979.

As a result, 61 countries including the U.S., Britain, Canada and China, boycotted the Games, although some athletes from boycotting countries competed under the neutral Olympic flag.

"The boycott really tarnished the Games," said Vitaly Smirnov, the first chairman of the Organizing Committee of the 1980 Moscow Olympics, and current honorary president of the Russian Olympic Committee. "We were ready to host 140 countries, which would have been a new record. Only 81 countries showed up."

"Authorities did not understand the repercussions of the boycott on the athletes and the organizing process. Nor did they care," he said.

While a boycott of Putin's Games is unlikely, talk of skipping the Games has intensified.

The biggest bone of contention, the anti-gay propaganda law signed by President Vladimir Putin in June, has triggered international appeals to boycott the Games to draw attention to Russia's poor human rights record.

But it is not only Russia's attitude toward homosexuals that has come under fire. Activists have also condemned the government's treatment of the migrant laborers who are building Olympic facilities in Sochi.

The report also criticized Olympstroi, the state corporation in charge of construction in Sochi, for remaining oblivious to the violations.

"Cleaning up" campaigns that inconvenience locals have also been a recurring theme in both Moscow's and Sochi's Games.

Prozumenshchikov of the Russian Federal Archive of Contemporary History believes Moscow became a textbook communist city during the 1980 Games: everything was clean and orderly, and there was plenty of food.

"In some cases, there even seemed to be a tacit agreement between the authorities and petty criminals that they were not to cause any trouble during the Games. 'You might be a thief, but you still need to be a patriot of your country' was the general understanding. "

Students were sent away for the summer to free up space in the city's dormitories, conferences were canceled and the city was completely closed to all transit transportation.

Putin's decree on placing a moratorium on rallies and limiting access to certain areas in and around Sochi will create a similar situation.

But measures taken for the Sochi Games have arguably been more drastic, with residents forced to relocate to make way for new facilities.

Locals who live in Sochi's Olympic hospitality zone will face fines if they refuse to renovate the exterior of their homes, as will residents who have "chaotic" balconies with laundry hanging out to dry or improperly installed air conditioners.

And Sochi's "clean-up" effort has extended to animals as well.

City authorities reportedly held a tender in search of a company to "dispose of" more than 2,000 stray animals in the area ahead of the Olympics. 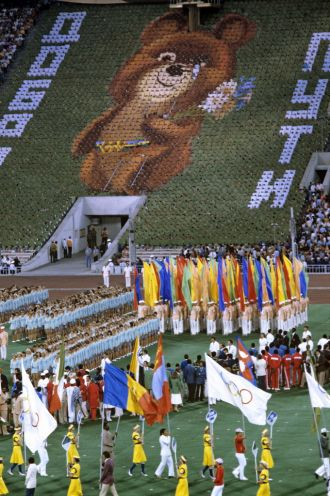 Wikimedia commons / ria Novosti Athletes from all over the world holding up flags at the 1980 Olympics.

Unlike Sochi, Moscow possessed pre-existing infrastructure and venues suitable for hosting the Olympics. The only pre-existing site the Sochi Organizing Committee had was the Caucasus mountain range, pure natural happenstance.

Moscow had been hosting large sporting events for decades, latently preparing for the summer of 1980. In 1928, the Russian capital hosted the first summer "Spartakiada," an international sporting event held until 1937 to counter the "capitalist" Olympic movement. Moscow's Central Dynamo Stadium, which seats 36,450, was built for the occasion.

Luzhniki Stadium, the venue for the 2013 World Track and Field Championships and the 2018 UEFA World Cup, was completed in 1956 for that year's Spartakiada.

The complex hosted another six Spartakiadas before the Moscow Games.

"No one hid the fact that the 1979 summer Spartakiada was a rehearsal for the Moscow Games," Prozumenshchikov said. "Many foreign athletes participated and it was a great way to test the venues, but also the surrounding infrastructure — hotels, services and the like."

While Moscow had been ready for decades, Sochi is still a little behind schedule.

Putin has been outspoken about problems and delays in preparations for the Games, even publicly dismissing and lambasting an official in charge of construction works in February.

Vitaly Smirnov, the honorary president of the Olympic Committee, also admitted that there were delays in construction.

"The Fisht Stadium is not quite ready," he said, proudly displaying his personal pictures of the venues in Sochi.

The interior of Fisht Stadium, the venue for the opening and closing ceremonies, is covered in piles of floor tiles with less than three months to go before the Games.

The stadium's building contractors have been accused of intentionally delaying work to demand more pay, showcasing the rampant corruption of Russia's construction sector.

Analysts and activists say the staggering price of the Games suggests that the government has turned a blind eye to billions of dollars embezzled in corrupt building contracts.

One report by opposition politician and Sochi native Boris Nemtsov puts the amount of money embezzled at $25 billion to $30 billion.

But Smirnov said he had no doubt that everything would be completed on time.

"Russians' character makes them believe they need to host, even if it kills them," Smirnov said. "They take everything they have and put it on the table. This is what we will do in Sochi. Everything will be ready."

Measures taken to prepare Moscow for the 1980 Games continue to benefit the Russian capital to this day.

The city more than doubled the capacity of its hotels, built the larger of two terminal complexes at Sheremetyevo International Airport and built new television stations to broadcast to the Far East.

The legacy of the Sochi Games remains unknown. But critics have said the city's expensive new sporting facilities — the product of backbreaking labor and corruption — will not be accessible to ordinary residents in the long term.

Correction: An earlier version of this article incorrectly stated that President Vladimir Putin signed the anti-gay propaganda law in July, instead of June.