Two customs officers halted the truck loaded with toy bricks at the border.

That was the extent of the error in the documents, causing the Lego truck to run into the brick wall of Russian bureaucracy.

The truck was not granted entry into Russia until the documents had been corrected and Lego could prove that the diameter of the toy bricks was, in fact, 12 millimeters and not 10 millimeters as previously stated, said Mogens Laursen, general director of Lego Russia.

Notwithstanding a few unpleasant incidents at the border, Lego has managed to maneuver its Russian operations with enormous success. Since 2007, it has increased revenue 10-fold and expects a $360 million annual turnover by the end of 2013.

In 2005, Veino moved to capitalize on blooming consumption by opening a local franchise of Jysk, a bath-, living-, and bedroom retailer with more than 2,000 stores across the globe.

But Veino, along with his associates and financial backers, encountered profit-killing fees from customs officers and ended up shutting down the Russian operations after losing more than $3.5 million in 2008.

The starkly contrasting outcomes of bids by two major Danish companies to hit it big in Russia could offer a lesson to investors hoping to succeed in a country that, despite its currently sluggish economy, is widely regarded as one of the most promising consumer markets in the world.

Success ultimately depends on three factors: a company's financial backbone, willingness to succeed, and patience, said the businessmen from Lego and Jysk. Time, they said, is important because an investment in Russia may not pay off as fast as in other markets.

Investors also should avoid applying their business model on a one-to-one scale from the European market to the Russian market, said Mette Baerbach Bas, a Danish author who studies Russian business culture. The mechanisms and structure of society can make cultural awareness a significant factor when outlining your Russian business strategy.

"It is essential to be aware that culture and history play a significant part in the Russian business life," Baerbach Bas said. "You will ultimately fail if you assume that your product will sell on the same terms in Russia as in Europe and Scandinavia."

Veino, sitting down for a recent interview just north of Copenhagen, quickly emphasized that he had no regrets about trying to introduce Jysk to Russian consumers even though he had left the business financially impaired. With the clear wisdom of hindsight, he said several "miscalculations" were made during the four years of failure.

One of these was miscalculations was misunderstanding the mentality of the Russian consumer. In the European market, where Jysk is well established with a decades-long presence, customers flock to stores whenever items go on sale with offers such as "50 percent off," "Get two for the price of one" and "Get a free towel for simply entering our shop."

Veino mounted a similar campaign in Russia, but none of the measures hooked shoppers.

"When we open a store in Germany, people sleep outside to make sure they get their hands on our goods," he said. "But when we had items on sale in Russia, the mindset of the consumer was, 'Why buy two chairs for the price of one when I don't even need it?' People don't buy something just because it is cheap. They buy a chair when they need a chair — sale or full price is not that important here."

The lack of interest in discounts sent Veino back to the drawing board. He ultimately decided to open a store in a shopping center with the expectation that the location alongside other stores would de facto attract shoppers.

As it turned out, getting shoppers through the door proved to be a task in itself. A renewed attempt to lure them in with European-style discounts also failed.

No Profit After Customs

Veino shook his head in despair when asked about the Russian customs service. He said customs officers ignored import invoices so he wound up paying a percentage of the value that the custom officers decided his goods were worth rather than a percentage of the goods' actual value.

"Russia has an official custom tariff that you can find on the service's homepage," Veino said. "But what it doesn't say, which is absurd, is that when your goods reach the border, they do not trust the enclosed papers and documentation."

He said the encounters with customs upset Jysk's goal to bring quality products at affordable prices into Russian homes. The profit that Jysk could have made ended up in a cash box at the Russian border, he said.

Still, Veino acknowledged that Jysk's failure could not be blamed entirely on customs officers.

Proper preparation and analysis are key to working in any country, and Veino and his associates found when they entered Russia in 2005 that a large amount of Jysk's assortment was simply not designed suitably for Russian homes.

"A double bed in Russia is smaller than a double bed in Europe. That obviously meant that our sheets and our blankets were too big to fit the Russian measurements. We should have reassessed our whole assortment before entering," Veino said.

In addition, he said, Russian households did not place a priority on good beds, comfortable blankets and quality pillows. Veino said he couldn't find a way to persuade shoppers that they had the basic right to sleep comfortably.

"The Russians haven't slept in comfortable beds for 80 years," he said. "When all of a sudden regular folks started to have money to spend, they spent it on cars, clothes, food and other necessities. We were too far down on the priority list." 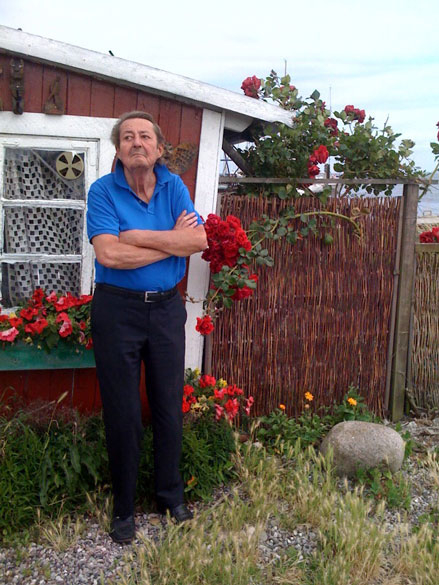 Jens Veino says he has no regrets about trying to bring Jysk to Russia. (Courtesy of Jens Veino)

Lego, in contrast with Jysk, has never interacted directly with Russian shoppers and instead relied heavily on distributers and other local partners.

"We do not have any financial contact with Russian consumers," said Laursen, who has lived in Moscow since Lego started its Russian operations in 1985. "Our sales, and thereby our influence, end when we sell to our distributers. Our distributers are essential to our business because we ourselves are not able to establish physical contact and a connection with Russian consumers."

The fact that Lego was a first mover by entering the market during Soviet times allowed it to slowly and steadily build strong relations with local partners and distributers. This relationship, Laursen said, has become the essential foundation of Lego's success, far outweighing the company's occasional unpleasant run-ins with customs officers.

"We were the first in our branch of business to familiarize ourselves with the Russian market and its mechanisms," he said. "Our competition arrived 10 years later. At that time we were already visible in the streets and in the mind of the consumer. We did not have to rush anything through.

The establishment of stable relations with a business partner is much more crucial in Russia than in other European markets, said Baerbach Bas, the specialist on Russian business culture. "When you want to establish contact to the relevant market of your product in Russia, aligning with the appropriate associates is especially crucial," she said. "Doing business here is just as much a personal investment as it is financial."

Laursen said that although he lacks sway over how Lego stores are run in Russia, he follows their activities closely while maintaining a necessary distance. In the future, Lego hopes to gain some influence over stores' daily operations to ensure a homogeneous experience for shoppers no matter that they choose to purchase the toy bricks in Russia.

Laursen said Lego is very much feeding on Russia's growing middle class. As the economy started stabilizing after the Soviet collapse, so rose Russian families' interest in the bricks.

But before Lego penetrated the Russian market with Lego Star Wars and Teenage Mutant Ninja Turtles, it formed a clear vision of its potential customers. The target was set to households with a yearly income of $15,000 to $20,000.

Laursen said it was crucial for Lego to have a clearly defined customer segment.

"We knew when we started doing business here that there were 20 million kids, give or take a few," he said. "It was important to us to find out how many of those kids live in middle income families. So we set the middle income bar at $15,000 to $20,000. Then we started narrowing it down: how many were boys, and how many were girls. Finally when we had a general view of the demographics that we were dealing with, we said: 'How do we reach this clientele? How do we get Lego into Russian homes? Is it via television, radio, newspapers, magazines or events?"

Laursen emphasized that a foreign company should commit 100 percent to whatever expansion strategy it adopts. He said Lego's success in Russia was the consequence of its persistence, its awareness that it was constantly targeting a specific costumer segment, and its determination not to yield an inch from its strategy.

The fine line between success and failure is no more difficult to balance in Russia than in any other market, but Russia offers unique challenges that make the tightrope walk different from elsewhere, Veino and Laursen said.

"Success naturally depends on time and resources," Laursen said. "We had both. We gave ourselves the time and had the financial courage to stay. That is really the essence."

Jysk, however, gave itself a smaller window of opportunity for success, Veino said. With just four years in Russia, Jysk's investment of time and money proved insufficient to process and adapt to the responses of Russian shoppers, he said.

While some investors might turn their backs on Russia after such a bitter experience, Veino's belief in the Russian business world has not been swayed.

"I still to this day believe that Russia is an undersupplied market," he said. "I strongly believe that there is room for newcomers in all areas of business, which is, for example, not the case in Europe. But you have got to put in the time — and the dengi, dengi."

A Ukrainian family was reportedly told they had “been in Russia too long" by border guards.
collapsing imports