A photograph of an Italian journalist posing with a pro-gay flag on Red Square moments before a run-in with police has gone viral online, drawing new attention to Russia's attitude toward gays and bringing unexpected fame to the writer.

Enrico Procentese, an Italian photographer and travel blogger, raised the flag reading "Love Is Love" in front of St. Basil's Cathedral during a reporting trip to Russia on behalf of Conde Nast Traveler in late October.

He said he was inspired by a photo of Oscar-winning actress Tilda Swinton, who protested Russia's "gay propaganda" law by holding a rainbow flag in front of St. Basil's Cathedral in July.

Procentese raised a plain white flag as his co-worker Maria Mastra, who accompanied him to Russia, took the picture.

"Unfortunately, taking the photograph was not easy, since the police immediately stopped me and asked me to give them the flag I was carrying," Procentese said by e-mail.

The only indication that the flag's message is pro-gay is a rainbow-colored, heart-shaped dot over the "i" in "Love Is Love."

The police officers made their demands in a torrent of Russian words that Procentese did not understand. He said he sought an explanation for why they were seizing the flag, but none of the officers spoke English.

Upon his return to Italy, the photo gained modest attention in media outlets like the Gay.tv news site and The Huffington Post's Italian site until La Repubblica, one of Italy's two main newspaper, featured it a few days ago on its website and Facebook page. Then it went viral, surprising Procentese.

"People are astonished by the fact that the police intervened to confiscate the flag in such a peaceful situation," he said Wednesday. 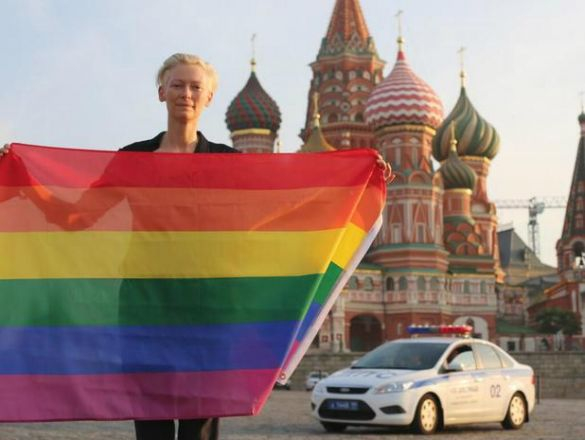 It was unclear what prompted the police to approach Procentese on Red Square, an area frequented by thousands of photo-snapping tourists and other visitors daily. But the authorities have shown little patience toward those openly opposed to the law banning "gay propaganda" that President Vladimir Putin signed  in June. The vaguely worded law makes promoting homosexuality to minors a crime, and a pro-gay public display such as Procentese's could be punished by 15 days in prison, a fine, and deportation from Russia.

The law, which the government has defended as a measure to protect traditional Russian values, has sparked outrage around the world. The government has found itself in an uncomfortable position in recent weeks when, among other things, protesters disrupted two Russian investment forums in New York and concerts led by pro-Putin conductor Valery Gergiev at the London Symphony Orchestra. Opponents also managed to convince the New York Stock Exchange to ditch an annual Russia Day event.

The "Love Is Love" campaign was launched in June after U.S. President Barack Obama tweeted a message in support of gay marriage with the hashtag #LoveIsLove in June. Within moments, the hashtag became the most popular on Twitter.

Procentese said he hoped other people would follow his lead to support gay rights through peaceful means such as posing for a picture on Red Square.

"I believe promoting awareness through messages like 'Love Is Love' is the only way to change this attitude in Russia as well as in other countries of the world," he said.