When President Vladimir Putin was asked at last month's Asia-Pacific Economic Cooperation Summit in Bali what he thought about U.S. President Barack Obama's absence due to a government shutdown, his answer could be interpreted either as genuinely sympathetic or cunningly sarcastic.

"After all, when it is impossible to adopt a budget, when the government is essentially taking a forced vacation — that is not a time for foreign visits," Putin told a group of businessmen.

Despite the U.S.'s announced intentions to prioritize relations with Asian nations, Obama had called off plans for his four-country trip around the region because of political gridlock back home. By contrast, over Putin's more than 13 years as Russia's principal leader, he has never faced such difficulties with lawmakers, who have almost always acceded to his demands — similar to the situation in key Asian governments, such as China and Vietnam, both of which have single-party rule.

Putin will make a visit to Vietnam on Tuesday that will be followed by a visit to South Korea, with both trips concentrating on concrete projects that could boost Russia's economic and political presence in the region, challenging similar U.S. ambitions.

In 2011, then-Secretary of State Hilary Clinton announced "America's Pacific Century" in an article published in Foreign Policy magazine, saying "the future of politics will be decided in Asia, not Afghanistan or Iraq, and the U.S. will be at the center of the action."

Obama had tried to put Asia at the center of his foreign policy, an effort that has often been frustrated by the need to address matters in an increasingly unstable Middle East still undergoing the upheavals of the Arab Spring. 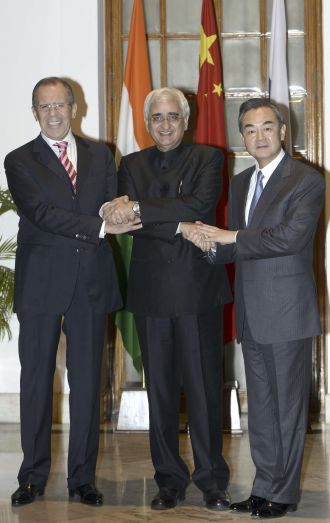 From left, Lavrov with his Indian and Chinese counterparts in New Delhi.

"As Asia becomes essential in economic terms, more and more countries are trying to project their influence there," said Viktor Sumsky, head of the ASEAN Center at the Moscow State Institute of International Relations.

"For Russia, it is important to maintain and develop its presence in the region, as this will be the only way to confirm and reinforce its status as a global player," he said.

Sumsky said he believes Putin will mostly talk economics with the leaders of South Korea and Vietnam, refraining from presenting a values-laden agenda.

In an article published in major Vietnamese newspapers in the run-up to his visit, Putin underlined the economic emphasis of the trip, speaking about joint projects in the oil-and-gas sector and saying that Russia does not support meddling in other countries' affairs.

"We uphold the rule of law in international relations and advocate that no alternative political or diplomatic tools should be used for resolving disputes and that every state has a right to choose its own path of development," Putin wrote.

In contrast to Putin's statement, Clinton listed "advancing democracy and human rights" among six "key lines of action" in her article on America's "pivot" toward Asia.

In further testimony to Russia's intensified diplomatic deployment in Asia, Foreign Minister Sergei Lavrov visited New Delhi on Sunday, meeting with his Indian and Chinese counterparts and declaring that a "new multipolar world order is being formed." He also voiced Russia's proposal to establish a new "security architecture in the Asia-Pacific."

Vietnam could be a strong ally in these endeavors, with many people in the Vietnamese government circles having been educated in the Soviet Union. Educational ties persist to this day, with Putin noting in his article that there are about 5,000 Vietnamese students currently studying in Russia, 2,000 of them under interstate agreements.

"Russia is investing in its future in the most dynamically developing region of the world," said Yelena Bragina, senior researcher at the Institute of World Economy and International Relations at the Russian Academy of Sciences.

"Vietnam is an active regional player, which can help Russia strengthen its ties there," she said by phone.

Later this week in South Korea, Putin plans to sign a military cooperation agreement and will discuss constructing a trans-Korean railroad that would span both South and North Korea and firmly link Russia's Trans-Siberian railway with Southeast Asia, which could make Russia important for the trans-continental shipping business. The project also offers a historic opportunity for rapprochement between the two Koreas.

Sumsky said Russia's advances in the region were being met with enthusiasm.

"If you look at feedback in these countries, they are all very positive about Russia's increased presence there," he said. "They only want Russia to get even more involved."

Blinken in Kyiv to Back Ukraine as Putin Stares Down West

After talks last week failed to ease fears, the White House warned that Russia was ready to attack Ukraine at "any point."
russia's response

Russia’s largest companies have lost more than $100 billion in value over the last week.