Miss Universe pageant's arrival in Moscow, the first time the contest has been hosted here in its 62-year history, brought out all the glitter and sequins that the 87 contestants could pack in their suitcases.

Matching the contest's galactic theme, the local organizers said that they plan to "impress all the planet" while the young women readily heeded the call to offer themselves as a spectacle.

The semi-final started off on Wednesday with introductions where contestants marched onstage in red and black cocktail dresses and yelled out their name, followed by the city and country they are from. The country names were in English, though upon hearing the wild applause in the hall, Miss Russia made a last-minute change and called out "Rossiya."

"It was such a great feeling when I came onstage for the first time," Miss Russia Elmira Abdrazakova told The Moscow Times after the show in between texting and smiling for photographs. "I came up with different intonations on how to say my introduction and 'Russia,' but when I saw the people I just yelled out Rossia!" 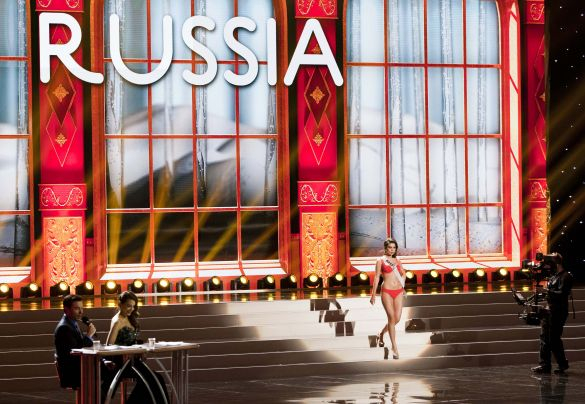 The show proceeded with the swimsuit and evening gown competitions during which the hosts, sports writer Nick Teplitz and Miss Universe 2012 Olivia Culpo, read out biographical facts about the contestants.

Models, actresses, army reservists, blood donors, cartoonists, kick boxers, tree planters, accountants, engineers and thrill seekers are among this year's batch of crown contenders. Many women said that they want to go into show business though there were also less-traditional facts, like Miss Malaysia Carey Ng's desire to own a private island and Miss Lithuania Simona Burbaite's habit of taking pictures of every meal she eats to remind her to work out.

The youngest contestant is Miss Guam, Alixes Scott, who is 18 and the oldest is Riza Santos, 27, from Canada.

Loud fans came to support Misses Curacao, Indonesia, Malaysia, Mexico, Myanmar, Philippines, Puerto Rico, Ukraine and Vietnam. At the end of the show some people danced in the stands with flags while the contestants posed for a collective photo and waved to well-wishers.

Seventeen countries vied to host Miss Universe this year. Russia's victory symbolized the first time that the contest has taken place in the country since the pageant started as a local Long Beach, California competition in 1952.

This year's contestants are "well-organized" and "professional," said Ermin Agalarov, vice president of Crocus Group, which is hosting the show at its concert hall, and one of the finale's musical performers. He said the contestants' good behavior lessened the burden on the organizers, though the show was still far from easy to put together.

"When me took the decision to hold Miss Universe here, we first got into this fight and only then did we understand what we were getting ourselves into," Agalarov told journalists ahead of the show. "An event of such scale can be compared to the Olympics, Formula-1, Eurovision. There are a billion viewers, as compared to the 200 million who watch Eurovision."

But it appeared that few Muscovites shared the organizers' enthusiasm for the contest, the final of which will be broadcast live Saturday at 5 a.m. Moscow time, 9 p.m. on the U.S. East Coast. Many seats were left empty after the final bell sounded and viewers in the balcony seats were hustled closer to the stage which left the top viewing platform completely bare.

"You cannot surprise Moscow with beautiful young women," a man muttered as he walked out of the concert hall after the show, seemingly oblivious to the 87 glamorously-dressed contestants posing onstage in their ballroom gowns. 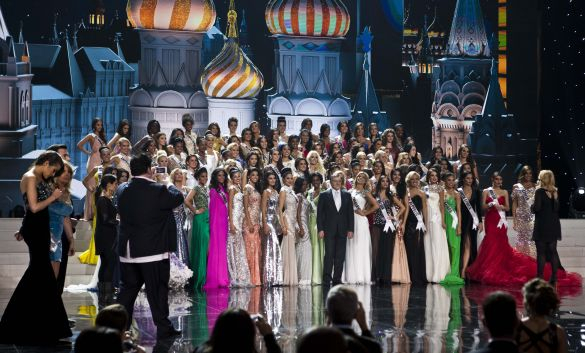 Even as the country’s excess mortality remains among the world’s highest, many Russians are refusing to accept new public health restrictions.
advanced arms

Russia, the United States, France and China have all been experimenting with so-called hypersonic glide vehicles.
posting over

“Access to the victims is not allowed on doctors’ recommendations,” authorities said.