On an overcast autumn morning this month about 200 St. Petersburg residents arrived at the city's Pulkovo airport knowing they would not fly off to exotic destinations.

However, the prospect of the airport as a destination did not deter them. In reality, all 200 of the people were volunteers, whose task it was to test the long-awaited new terminal that has been under construction for three years and is now in the final stages of preparation for an early-December opening.

To the sound of jackhammers in use nearby, all of the participants of the test crew were given simulated flight tickets to different destinations such as Kaliningrad, Moscow, Frankfurt, Pula, Yerevan or Prague.

Having received suitcases filled with newspapers, the volunteers quickly and smoothly completed all preflight procedures, including security inspection, check-in, preflight inspection and boarding. Some of the participants received cards with special tasks developed by the company responsible for testing the new facility and played unaccompanied minors while others carried containers used to transport pets. The memo handed to all of the volunteers, however, asked participants not to simulate drunk or misbehaving passengers.

"This is our six-year-old unaccompanied minor," a Pulkovo employee said to the women staffing the check-in desk for the Prague flight as they pointed to a young woman of 25. The girl smiled shyly and was then handed over to a staff member responsible for her care.

Many volunteers were impressed with the size of the new terminal where some of them ended up getting lost because of inadequate or missing signage.

"It's almost like the airport in Dubai!" commented 69-year-old volunteer Nina Kuznetsova, waiting to board an imaginary flight to Prague.

"This airport also produces the impression of space thanks to its shiny metal and colossal size. I am pleased that we have it now, and it will be nice to fly to St. Petersburg! Our city is worthy of such an impressive airport!" she said. Despite her advanced age, Kuznetsova is not only engaged in real estate activities but also participates in various volunteer projects.

Andrei Smirnov, a 27-year-old sales specialist who came with a friend to test the new terminal, was also impressed by the size of the building but noted that there were not enough signs to make finding the way easy.

However, people had different opinions about the terminal, and some volunteers expressed doubt about the ability of the new terminal to fulfill its mission.

"The project is good. It is stylish, looks futuristic, but for the second city in Russia, it still does not seem big enough. New terminals are usually not built every 10 years, so 10 years from now even this terminal may not be enough," said 27-year-old businessman Andrei Ivanov, who gave himself the day off to get a sneak peek at the new terminal.

Pulkovo began testing the terminal on Oct. 1, and plans to carry out such exercises every Tuesday and Thursday until Nov. 21. For each test, Pulkovo will employ an average of 200 people. Some future exercises will involve from 300 to upwards of 1,000 volunteers. Normally, testing lasts for 5 1/2 hours. Volunteers from 18 to 65 years of age can apply for the position of tester at the Pulkovo Airport website. 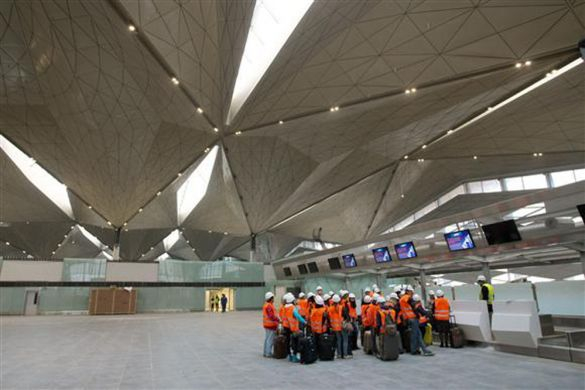 Volunteers at a check-in desk awaiting instructions on where to go next.

According to the participants, many learned about this unusual activity though various social networking groups, from an electronic mailing from the Kelly Services recruitment company  and by word of mouth.

The testing of new airport terminals has become standard practice by architects throughout the world. This procedure requires that any new terminal and its systems and services be reviewed to ensure that the airport is easy to navigate and comfortable.

After their day spent testing St. Petersburg's newest terminal, volunteers fill out questionnaires that point out any shortcomings that they have noticed so that the staff at Pulkovo can address such matters before the terminal opens to the general public. Volunteers are presented with small gifts as thanks for their participation.

Russia's second-largest city has planned for many years on having a new terminal that would combine the service of domestic and international flights. At the moment, these two functions are carried out in separate terminals: Pulkovo 1, serving mostly domestic destinations, and Pulkovo 2, serving international destinations. The two small, low-slung terminals are six kilometers away from one another, which is especially inconvenient for transit passengers.

The new terminal, which can handle up to 17 million passengers a year, will unite the impressive new terminal building and the existing Pulkovo 1 airport, which is currently awaiting reconstruction.

The new terminal complex covers an area of 150,000 square meters and consists of three levels, connected by 17 escalators, 45 elevators and numerous stairs.

The British architectural firm Grimshaw was given the task of developing a design for the St. Petersburg airport that reflects the spirit of the city and its architecture.

According to the architects, the ceiling of the arrivals hall, located on the first floor, is a reflection on the north and references the steel-colored surface of St. Petersburg's Neva River. At the same time, the rugged geometric structure of the main roof of the building, crowning the third floor, represents the angular style of Soviet-era architecture, and its copper-gold hue is associated with glittering domes of the cathedrals of St. Petersburg. The broader perspective ceiling riddled with symmetrical glass panels that let in the daylight adds a spirit of grandeur.

The architects have not neglected to include the defining features of St. Petersburg — its canals and bridges — reflecting them in the design of walkways and corridors within the new terminal.

The waiting room is impressively spacious and bright compared to the modest size of Pulkovo 1 and Pulkovo 2. It is well equipped, with 13,500 square meters of floor space given over to restaurants, cafes and, of course, shopping. Duty-free shops at the new terminal will offer a wider range of goods than is currently available at the airport, said a spokesman for Northern Capital Gateway, the international consortium that is overseeing the construction of the new terminal and is also its operator.

The company is particularly proud of the fully automated baggage system that can handle up to 4,800 pieces of luggage per hour and stretches five kilometers. The new terminal will be equipped with eight telescopic boarding tunnels. After the reconstruction of the Pulkovo 1 terminal planned for July of next year, their number will increase to 14. However, about one-third of passengers will be transported to their aircraft by bus.

The extended area of the new terminal will offer access to the four-star Radisson Park Inn hotel, which is due to open in December. The terminal is also equipped with a multi-level parking garage for 560 cars and long-term parking for 1,200 vehicles.

Analysts from LMS, a local investment company, call the new Pulkovo terminal one of the most successful ongoing investment projects in the city. The cornerstone for the terminal was laid in November 2010. In addition, this is the first project in the Russian aviation industry implemented through public-private partnerships without recourse to any state funding. The Northern Capital Gateway consortium includes Russia's VTB Capital, German's Fraport and the Greek Copelouzos Group.

Pulkovo is the only international airport in the northwest of the country and is Russia's third-largest in terms of passenger traffic. Plans to acquire the status of an international transport interchange hub by 2025 means that the new facility could rival Moscow's leading airports. The airport's strategy involves attracting new airlines that will be able to serve a large range of scheduled flights from Japan, the U.S., Asia-Pacific and the Middle East.