A previously unheard interview with Nobel-prize-winning Soviet poet Joseph Brodsky has been published on the web portal, Colta.ru. The interview took place in Vienna in 1972, shortly after Brodsky's departure from the Soviet Union, and was the first comprehensive literary interview Brodsky gave in the West.

"Of course, he is a very bad poet and an even worse person," Brodsky says of Yevgeny Yevtushenko. This pretty much sets the tone for the rest of the half-hour interview, in which he speaks cuttingly and at great length about many of his contemporaries in the world of Soviet culture. He then turned the spotlight on himself and agreed that he could be called a Soviet poet, while saying that he had "a strong aversion to all labels apart from simply 'Russian.'" 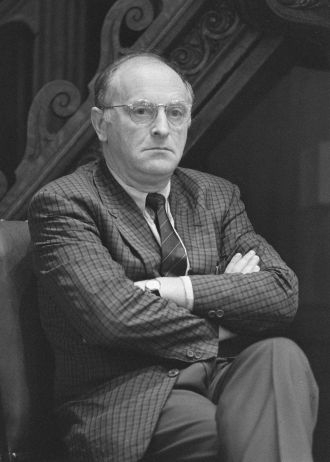 Joseph Brodsky looking grumpy, which is how he acted in this interview.

Following his denunciation in 1963, Brodsky suffered persecution at the hands of the Soviet authorities and was charged with ''social parasitism,'' for which he was sentenced to five years of hard labor. This sentence was later commuted after several prominent Soviet and foreign cultural figures, including Yevtushenko and Shostakovich, intervened on his behalf. He became known as a symbol of artistic resistance in the West and his works were translated into many languages.

Brodsky left the Soviet Union in 1972, never to return. Although he had been invited to emigrate to Israel, he went first to Vienna and then to the U.S., where he died in 1996.

While in Vienna, Brodsky was interviewed by Elizabeth Markstein, an Austrian translator and literary critic, and her husband, Heinz Markstein. Elizabeth Markstein was closely linked to many Soviet literary figures and translated Solzhenitsyn's ''The Gulag Archipelago.'' Although she was deprived of a Soviet visa in the early 70s, she had traveled frequently to the Soviet Union during the preceding decade and had made the acquaintance of many Soviet writers, including Brodsky. Until the recent death of Elizabeth Markstein on Oct. 15, the audio recording of the interview was kept in her archives.

So what does the interview contain that might be interesting for Brodsky fans? According to Lenta.ru, the interview is remarkable not only for the unusual circumstances in which it took place, but also the breadth of topics that Brodsky touched upon and the openness with which he spoke.

He mentioned the state of Soviet culture and society and revealed some interesting details of his own biography, such as the fact that he began writing at the age of 18, and also discussed the creative process of a writer, and the challenges that writers face.

Brodsky read some of his latest poetry during the interview, and Markstein's young daughter can be heard playing in the background.

The interview is a must-read for Brodsky fans as well as anyone interested in the Soviet literary world. It has the feel of a relaxed conversation between friends and lacks the formality of an official interview.