VIENNA — Do not expect a breakthrough, but the chances for progress have seldom been better. This is the message coming from Iran and six world powers, including key players Russia and the U.S., ahead of renewed talks this week meant to end a decade of deadlock on Tehran's nuclear program.

The two sides come to the negotiating table in Geneva on Tuesday and Wednesday amid a feel-good atmosphere that began with the June election of centrist Iranian President Hassan Rouhani. Subsequent conciliatory comments by Iranian officials were capped last month by a phone call between Rouhani and U.S. President Barack Obama — the first conversation between U.S. and Iranian leaders in more than three decades.

Iran insists it does not want nuclear weapons. But building on the momentum of that telephone call, Iranian officials, from Rouhani down, say their country is ready to meet some international demands to reduce its nuclear activities.

If so, the talks, which will include the U.S., Britain, France, Russia, China and Germany, could be the launching pad for a deal that has proven elusive since negotiations on Iran's nuclear program began in 2003. A deal would also reduce the threat of war between Iran and Israel and possibly the U.S. The latter two nations' leaders have repeatedly warned that they would never accept a nuclear-armed Iran.

From the six-power perspective, the ideal solution would be for Tehran to scale back aspects of its nuclear program that many nations fear could aid in making a bomb. That would trigger a gradual lifting of the economic sanctions crippling Tehran's economy.

Even if achievable, an endgame is far away.

Gary Samore, part of the U.S. nuclear negotiating team with Iran until earlier this year, says the Geneva talks offer "the best opportunity of a decade." At the same time, he expects "a very slow grind."

On Monday, a top Russian official also tempered expectations for the talks, saying there was not yet any need for a meeting on  ministerial level.

"You have to understand that you need grounds for such a meeting," Deputy Foreign Minister Sergei Ryabkov said, Interfax reported.

"The groundwork has to be laid and a variety of issues need to be identified that are worthy of being addressed specifically by a minister, specifically on his level. At the moment, we are assuming the negotiations will continue in the format established in recent years," Ryabkov said.

Heading Iran's delegation at the talks is Iranian Foreign Minister Javad Zarif, a veteran, U.S.-educated diplomat who honed his skills as part of Tehran's team negotiating a ceasefire with Iraq 25 years ago. He says his country is ready to allow more intrusive international perusal of Tehran's nuclear program. 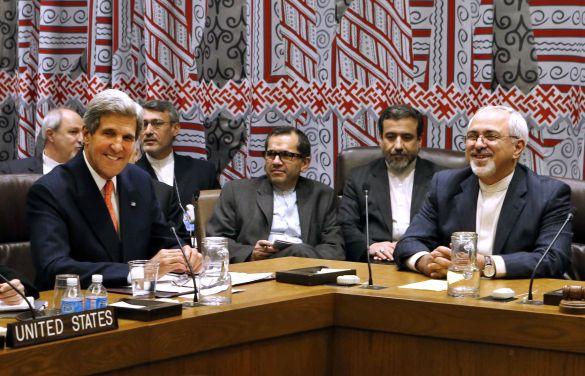 U.S. Secretary of State John Kerry, left, and Zarif attending a meeting at the United Nations on Sept. 26.

Other Iranian officials, meanwhile, say there is room to discuss international concerns about Iranian uranium enrichment to 20 percent — a level that is higher than most reactors use for power and only a technical step away from weapons-grade uranium suitable for warheads.

Iran now has nearly 200 kilograms of 20 percent-enriched uranium in a form that can be quickly upgraded for weapons use, says the United Nation's atomic agency, which keeps tabs on Iran's nuclear activities. That is close to, but still below, what is needed for one nuclear weapon. But even if Iran agrees to stop 20 percent production, ship out its 20 percent stockpile and allow more oversight by UN nuclear inspectors, the six powers want more.

A former senior UN official who has acted as an intermediary between U.S. and Iranian officials says the six powers seek far tighter restrictions on Iran's uranium enrichment program. He demanded anonymity because he was not authorized to publicly discuss his exploratory talks with both sides.

Specifically, the official said the six powers want significant cuts in the more than 10,000 centrifuges now enriching uranium. They also demand that Iran ship out not only the small amount of 20 percent uranium it now has but also most of the tons of low-enriched uranium it has produced. And they want caps on the amount of enriched uranium that Iran would be allowed to keep at any time.

For the U.S. and its allies, low-enriched uranium is also problematic because it can also be used to arm nuclear weapons, albeit the process is longer and more complicated than for 20 percent uranium.

While seeking only to reduce enrichment at a sprawling underground facility at Natanz, the six powers also want complete closure of another enrichment plant. This unit at Fordo, south of Tehran, is heavily fortified, making it more difficult to destroy than Natanz, which lies southeast of the Iranian capital, in case it is turned toward making weapons.

Demands to reduce enrichment instead of stopping it implicitly recognize Iran's right to enrich for peaceful purposes. That already is a victory for Tehran, considering talks began 10 years ago with the international community calling on the Islamic republic to mothball its enrichment program.

"It is pretty clear that Iran will have to be allowed some degree of enrichment," said former U.S. State Department official Mark Fitzpatrick, who now is a director at the International Institute for Strategic Studies. "But the enrichment has to be limited."

The former UN official said his talks with senior Iranian officials indicated that there would be tough bargaining on centrifuge numbers. Even if Tehran agrees to downsize enrichment, the Iranians will probably offer stiff resistance to closing Fordo, he added, summarizing his talks with senior Iranian officials directly involved in the upcoming negotiations.

Still, Rouhani and Zarif appear to have the backing of Iranian supreme leader Ayatollah Ali Khamenei to at least explore options that would ease the sanctions crippling Iran's oil exports and financial transactions. Khamenei says he backs "heroic flexibility" in negotiations, while cautioning against too much trust in his country's enemies.

But that support may fade unless Zarif can show quick progress to skeptics at home. If he cannot pull it off, the momentum may fizzle and stalemate could be renewed, leading to increased pressure from Israel on the U.S. to stop Tehran's nuclear progress by armed force.