While some people line up outside stores for the release of the new iPhone or other new gadget, others feel the same desire for doughnuts.

Maxim, a Moscow resident who spent nearly a full day waiting at Russia's first Krispy Kreme store near Red Square, was first in line when it opened and will receive a dozen free doughnuts every week for a year.

There were hundreds of doughnut lovers near the Krispy Kreme franchise in Moscow, waiting for the doors to open at 9 a.m.

The young man took his position near the American-based chain at 11 a.m. Wednesday, with the second person joining him an hour later, he said. There were hundreds of people near the store Thursday morning, waiting for the doors to open at 9 a.m.

Krispy Kreme did not let its fans down. The company's international president, Jeff Welch, said the Moscow store was capable of producing more than 1300 doughnuts per hour. People worked all night, he said, so there were enough doughnuts for the opening.

Russians are not the first to wait for an extended period of time for the glazed goodies. A Londoner named Benjamin Esterson has become fabled for attending more than twenty such openings and receiving coveted Krispy Kreme gold cards, which entitle the owner to free doughnuts.

“I first tried Krispy Kreme doughnuts in Britain. Then I found out there was going to be one in Moscow. When we found out about the promotion, I was determined to be like Ben, except he spent a day longer than me in line,” Maxim said. 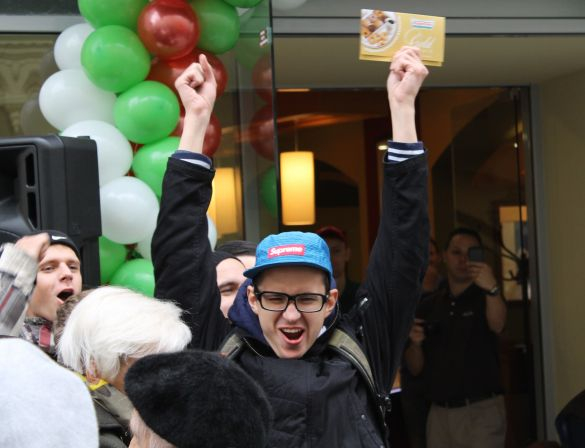 A recent Krispy Kreme opening in Edinburgh, Scotland caused three days of traffic chaos, with scores of people flocking to the cafe to try the doughnuts and take advantage of the opening week promotions, the Daily Mail reported.

The feedback at the brand's first Moscow franchise, which is owned by the restaurateur Arkady Novikov, so far has been very positive, its CEO Nikolai Uvarov said.

“It's all about fun. Our main job is to let people have fun. Our consumer culture is such that when people buy a dozen [doughnuts], they share them with their colleagues and friends,” he said.

He added that there were future plans for doughnut fundraising programs, a common practice in the U.S., where the sweets are often sold to raise money for charity.

Russia is the 23rd country to welcome Krispy Kreme. Five more shops are scheduled to be opened in Moscow in the next few months and more are possible if Muscovites like the doughnuts, Novikov said.

Argument over staffing levels at embassies continues after U.S. forced to lay off almost 200 staff across Russia.
tokyo olympics

Kristina Tsimanouskaya is expected to stay at the Polish embassy in Tokyo until her departure to Warsaw.
conservation change

The new amendments permit the killing of rare and endangered species in “exceptional cases.”