RUZHYN, Ukraine — It was meant to be the happiest day of her life. Instead, Yulia Yukhimets' wedding ended with her being rushed to the hospital, weak, pale and hooked to an IV — together with nearly 60 guests.

"I have always wanted all of this, but look how it ended," Yukhimets, 20, a slim and shy blonde, said from the hospital in the town of Ruzhyn, where she was taken in an ambulance from a nearby village this month.

Every year, hundreds of Ukrainian newlyweds and their guests need medical treatment after suffering food poisoning at wedding banquets. They are victims of Ukraine's cult of traditional big wedding hospitality, which calls for treating guests to more food than they can eat and the hosts can safely prepare. Most often, the poisonings take place because the home-made food at village weddings is not properly refrigerated while it is prepared in huge batches over several days.

Many cultures favor big weddings, but a traditional Ukrainian village wedding is nothing short of a sacred ritual, bringing together the entire community at food-laden tables for song, dance and celebrations that last several days.

Ethnographer Olena Shcherban says that in folk culture, a wedding is considered to be one of the three key events in a person's life, along with birth and death, and is an occasion for the community to give its official blessing to the new family.

The very Ukrainian word for wedding — "vesillya" — is derived from the words "joy" and "rejoice." And in popular belief, the bigger the party, the happier the marriage.

So it was supposed to be at Yukhimets' wedding. 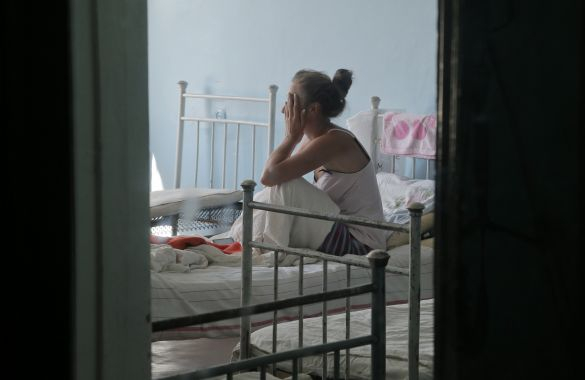 A 20-year-old wedding guest sitting in her hospital bed after getting sick.

After registering their marriage in a civil ceremony, the wedding party headed for the first day of celebrations at the bride's home in Nemyryntsi, a small village in central Ukraine, surrounded by corn and sunflower fields. A large tent went up in Yukhimets' garden and about 150 guests sat down to toast the bride, a primary school teacher, and her groom, Oleksandr, 29, a mobile phones salesman. In line with tradition, the tent was covered with birch branches and a maroon carpet was hung behind the newlyweds' table, decorated with an Orthodox Christian icon and a hand-embroidered towel.

Yulia's mother, Valentyna Hrabchak, was in charge of whipping up the once-in-a-lifetime event — one that local custom dictated should last at least three days with a minimum of 35 dishes, not counting desserts.

She slaughtered a home-grown pig two days before the wedding and summoned 20 girlfriends to help with preparations. Together they served up a colossal feast, all home-made: meat patties, pate, stuffed cabbage rolls, meat rolls, sausage, salads, chicken wings, 12 round loaves of bread, fried steaks, smoked fish, pancakes and much more.

The food was delicious and the party was fun, complete with a lemon-eating contest, traditional Ukrainian songs and a wedding dance. The next day, Yulia and Oleksandr were wed in a church and the celebration moved to the groom's house. But already by the afternoon, many started feeling unwell. First, suspicion fell on men drinking too much "horilka," or Ukrainian vodka. But after the bride, the guests and even the musicians suffered fever, stomach aches, vomiting and diarrhea, it became clear that something else was to blame.

Yulia was rushed to the Ruzhyn Central District hospital in her pajamas, having just changed out of her wedding dress. She and others were given antibiotics and intravenous drips. Some were in such bad shape that they were carried on stretchers and rushed into emergency care, among them a 2-year-old boy. Fourteen of those who fell ill were children. 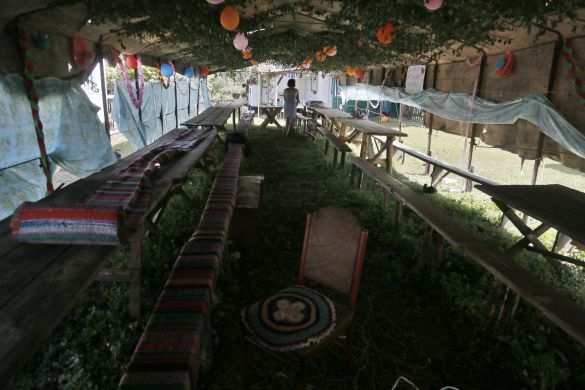 Empty tables from the site of a wedding party in the village of Nemyryntsi where 60 guests  got food poisoning.

There were so many wedding patients that the hospital quickly ran out of beds and drugs. Some patients were put on trolleys in the corridors of the hospital's infections unit; a rich villager donated money and medications to help fellow townsfolk. A week after being admitted, most patients were feeling better and some were being discharged.

Mykola Zozulya, the hospital's head doctor, said lab tests showed that the infection was caused by salmonella. He frowns upon lavish weddings, saying preparing and eating so much food is a health hazard. "It's our Ukrainian mentality: We want the table to collapse under the weight of the food."

The Health Ministry said it does not keep statistics of wedding poisonings. But such incidents are frequent, especially during hot summer months that are the preferred season for weddings.

Hrabchak, who did not get sick, blamed the eggs she bought at a local store and used in most of the dishes. She said the food was all home-made and properly stored in refrigerators and a cold cellar.

And most wedding participants being treated at the hospital defended the big "vesillya" as a wonderful tradition — saying they simply got unlucky.

"These traditions were invented not by us, but by our ancestors," said Svitlana Yukhimets, the wedding's toast maker, "so we try to maintain them."

Hrabchak was nearly in tears at what happened. She said she regrets that the wedding she organized caused her loved ones so much suffering, but still believes that the sacred tradition of big and hearty weddings should live on.

"You should have, and have and have weddings and not be afraid that something would happen," Hrabchak said. "If you are afraid of wolves, don't go into the woods."