Groups of workers squatting on their haunches surrounded by piles of sand and broken tarmac is a common picture for downtown Moscow these days. But Muscovites can keep calm: this is not another 2 billion ruble effort by acting Mayor Sergei Sobyanin to replace asphalt with tiles on pavements around the city.

This time, City Hall is pushing to make Moscow's center comfortable for walking and is organizing pedestrian zones across the city.

And at the center of the plans, which will see the city authorities put down 50 kilometers of pedestrian walkways by Sept. 1 — including 22 kilometers in the city center — is an ambitious renewal of Gorky Park.

The park has soaked up the attention of the City Hall over the last two years, ever since a 2011 decision to ditch the sad attractions and cheap barbecue restaurants left over from the 1990s and recast the park as Moscow's flagship contemporary civil venue.

Now, only two years on from a transformation that made the park into a wildly popular national trendsetter, it is facing another large-scale overhaul.

Walkers will be satisfied early — within the next two weeks Gorky Park, together with the adjoining promenade extending northeast along the Moscow River, will get nearly 3 kilometers of walking routes, acting deputy Mayor Sergei Biryukov told a news conference late last week.

In the longer term, Muscovites can look forward to more lawns, better access and a radically new landscape design in a new-look expanded park.

The creative force behind the wider redevelopment is British firm LDA Design, which won a $200,000 tender announced by City Hall last year.

Reviving and building on the Soviet tradition — which inaugurated the concept of a cultural and recreation area — LDA Design has come up with the concept of a "park for everyone, where culture meets nature."

The rejuvenation — scheduled for completion in 2017 — is supposed to encourage a greater diversity of visitors and take Gorky Park to the global top-level of the world's most well-known recreation areas.

According to the design firm's plan, a major focus will be on reviving Russia's cultural heritage. The 120-hectare area facing an overhaul — which includes the territory of Neskuchny Sad adjoining the park and the Vorobyovskaya Naberezhnaya of the Moscow river that follows the bend of the river below the Stalin-era skyscraper of Moscow State University — will be divided into seven zones, each with a unique landscape design reflecting a specific period in Russian history.

Looking back at the different landscapes that have existed on the territory of Gorky Park and Neskuchny Sad over the years, the designers found much of what they were looking for.

"The park is a living encyclopedia of landscape design. Its landscapes have just been hidden by decades of unsympathetic buildings and tree planting over the years, therefore, those original landscapes and different designs have been obscured and are difficult to see," said Sally Prothero, a director at LDA Design. 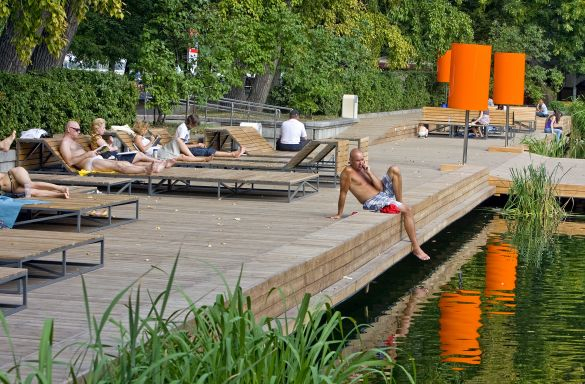 Gorky Park will have waterfront leisure gardens, an arts space, an outdoor gym and a glass orangery full of fruit.

The design of the Parterre, for example, the area stretching from the main entrance west toward Neskuchny Sad, reflects the character of the All-Russian Agricultural and Industrial Exhibition, or VDNKh, she said.

In 1923, the first agricultural exhibition was organized on the site of the modern Gorky Park: a prototype of VDNKh, which was designed as a grandiose showcase of Soviet achievement and now occupies a vast area north of Moscow's city center.

Gorky Park was built five years later with an imposing main gate resembling that at the All-Russia Exhibition Center, the current name of VDNKh.

The appearance of Neskuchny Sad, Prothero added, reflects the character of the landscapes surrounding the 18th- and 19th-century estates of the Russian nobility that once stood here. The spirit of some of them, like the estates of the Trubetskiye and Golitsyny families, will be recreated in the new Gorky Park.

"All those different design styles were popular at the time of their creation and can help to tell the story of those periods of Russian history," Prothero said.

In another new feature, Gorky Park will be divided into nine zones, each with a different leisure activity focus. Among them will be waterfront leisure gardens offering summer and winter activities, an arts space, an outdoor gym and an 18th-century glass orangery full of fruit, vegetables and flowers.

"A successful park is one that integrates environment, activity and management and, from a design perspective, one that combines beauty, vibrancy and accessibility," said Andrew Harland, senior partner at LDA Design. "Gorky Park will have all of these things as well as a rich historical and cultural backdrop," he added.

To improve accessibility at the park, whose main entrance faces the wide and noisy Krymsky Val, the British designers promise an infrastructure upgrade. According to the design project, Gorky Park will see existing entrances improved and six new access points added.

The park will also become greener and will get a reorganized network of pedestrian walkways that will link historical and recreation zones.

The city budget will shoulder the bulk of the project's cost, providing 60 percent of overall spending. A further 20 percent will be taken from the park's operating revenues. The final 20 percent will come from private investment of the sort made by Phillips, who recently did the lighting in the park, said Anton Yakimov, Gorky Park's spokesman.

The redesign will catapult Gorky Park to the status of New York's Central Park and London's Hyde Park, reinforcing Moscow's position as a leading international destination, according to LDA Design's statement.

That goal is attainable, said Nikolai Kazansky, general director of Colliers International in Russia. The main aim of both Central Park and Hyde Park is to offer a recreational environment to visitors who can come simply to relax on the grass, he said.

"A similar environment should be created in Moscow, and, given the central location of Gorky Park, it could certainly be analogous to those parks," Kazansky said. "Especially since the brand is already well-known abroad thanks to the music band," he joked, referencing to the Soviet rock band Gorky Park.