When film director Danny Boyle came up with the idea of having James Bond parachute Queen Elizabeth II down to the opening ceremony of the 2012 London Olympics, Lord Coe knew how to seal the deal with Buckingham Palace.

The former member of parliament pulled a few strings at the court, and before long, the Queen became convinced to accept the extravagant role.

Coe, 56, himself has had many roles to fill in a life full of tangents, and victories. One thing the two-time Olympic middle-distance champion has learned how to do in all of them is to push till the finish.

In 1980, he was one of just a handful of Western athletes who went to Moscow for the Summer Olympics after most Western states decided to boycott the games to protest the Soviet invasion of Afghanistan. That experience was formative for Coe, who has held firm to his belief that Olympic boycotts are only harmful to young athletes.

"I will always be opposed to boycotts of sporting events because they don't achieve what they were set out to do," Coe said. "In fact, the only thing they do is damage the ambition of athletes and the rights of young competitors who often spend over half their young lives devoted to that moment."

After winning gold medals in the 1,500 meters at the 1980 and 1984 Olympics, Coe eventually moved into politics and to the organizational side of sport. For several years he was a conservative member of the British parliament and then the driving force behind the highly regarded London Olympics in 2012.

In 2015, Coe, often referred to affectionately in Britain as Seb Coe, short for Sebastian, is poised to replace Lamine Diack as president of the International Association of Athletics Federations — or maybe even run for mayor of London.

Such a run would likely not be the last in a life full of various forms of running. As the World Athletics Championships take place in Moscow, he is making time for workouts in front of his hotel overlooking the Russian White House while helping steer the IAAF, negotiating the future of track and field during conferences that accompany the sporting event. 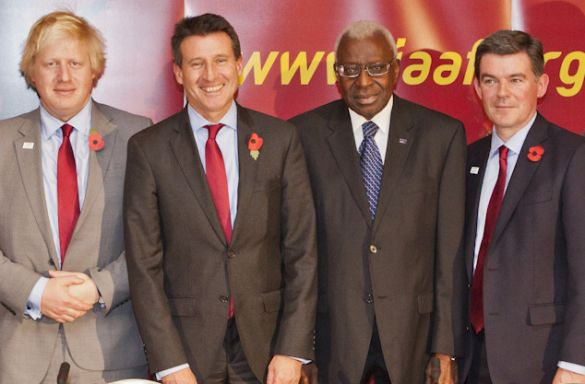 Q: Lord Coe, how do you find the championships? People have noted that attendance has been low at many sessions.

Q: Why is it that the Olympic games are usually so much more popular than track and field championships?

A: We have had world championships in the last few years that were very well supported. We had Berlin, which was a fantastic games, and Daegu in South Korea with 90 percent of the venue sold out. Track and field does not just need the Olympics — it is strong enough on its own. If you look at people who watch track and field, it is still the second-largest spectator sport in the world.

Q: Do you think Moscow could have done better in promoting the event?

A: I think that is a question you have to ask the organizing committee. But you can always learn. Every championships has to learn lessons from the previous ones. What makes sport important is that you should never stop learning. When we were running the London Games, we were learning from previous ones: from Beijing, from Sydney, Athens. You want to make every sport event the best, and you want to make it attractive to younger people — that's the important bit.

Q: How does Moscow look different to you since you were here in 1980?

A: Interestingly, the landscape around Luzhniki Stadium and the road and the river hasn't changed at all. For me it is very evocative to be there. I think of Luzhniki Stadium as in a way my spiritual home. My races in Moscow defined a large part of my career, and in a way, defined what I was going to do in sport. I am really happy to be back here.

Q: At that time, did you feel you were being contrarian as one of the few athletes who came during the boycott?

Q: British playwright Stephen Fry wrote a letter to you and Prime Minister David Cameron asked you to support a boycott of the Sochi Games. What do you think about this initiative?

A: First of all, I know Stephen very well and he was a great help and supporter of the games in London. We will discuss this properly, as friends discuss things, when I get home. But I will always be opposed to boycotts of sporting events because they don't achieve what they were set out to do. In fact, the only thing they do is damage the ambition of athletes and the rights of young competitors who often spend over half their young lives devoted to that moment. I am a firm believer that international sport promotes social change and provides a platform and sometimes shines a light on some of those issues. So I am not dismissing the issue, but I am very firmly opposed to the use of international sport in that vein.

Q: Do you believe that people should be able to use sport as a platform for their beliefs?

A: Well, they do — it is inevitable. Sport is very high-profile. The Olympic games, the world championships coming to a city, is a very high-profile event. Of course, those events will always attract attention, both sporting and otherwise, and that is what we have to be realistic about; this is the world we are living in. You shouldn't close down the debate, but you should resolutely defend the right of international sport to do what we were asked to do, which is to create a platform for the best athletes to compete and inspire a generation of young people to come through and take part in sport and also to allow countries to understand more about each other. International sport has never been an inhibitor of change, and often it has helped to promote change.

Q: Being the organizer of a successful Olympics in London, do you have any advice for the Russian organizing committee for Sochi?

A: No, Sochi will be a great games and Dmitry Chernyshenko is a very good chief executive. I am now President of the British National Olympic Committee, and I will be coming to Sochi in September to have a look at the latest developments. My technical teams in London have been very impressed with all the progress.

Q: What have you learned about engaging young people and the community with the Olympic movement?

A: In London, we used social media and made sure that we had Olympic education programs in schools. Some 26,000 schools signed up for that throughout the United Kingdom, and some 6 or 7 million pupils participated. We had social media that helped us connect young people to the games, not just through sport but in terms of cultural and educational values. The Olympic Games does inspire the imagination of young people.

Q: There has been a lot of criticism of Russia for the Olympic Games and other big sporting events the country will be hosting in the coming decade because of all the money being spent and questions regarding how the venues will be used afterward. What do you think of that criticism?

A: You can have many opportunities to stage more events there. Sochi can become a very big tourist destination for winter sports. The problem is that journalists who ask that question tend to always assume that this is the total cost and not an investment in local people and in your country and in the ability to stage more events. The cost of the infrastructure investment in East London was 9.4 billion pounds, and 3/4 of that had nothing to do with the Olympic Games. It has left new schools, new hospitals, training venues and competition venues that local people can use, a shopping center that now employs 8,000 people, most of whom were unemployed. In the Olympic movement, people only talk about cost, when actually this is an investment in your country and in your community.

Q: At the London Games, is it true that you helped to organize Her Majesty's appearance at the opening ceremony?

Q: Do you think that the Sochi Games will be successful at diverting Western criticism of Russia into something more constructive?

Marina Ovsyannikova, who has twice been fined for opposing the war, faces criminal charges of spreading "fake news" about the military.
one man's truth

The pro-Kremlin actor was shown around Russian-occupied eastern Ukraine and the site of a strike that killed Ukrainian prisoners.
'military operation'